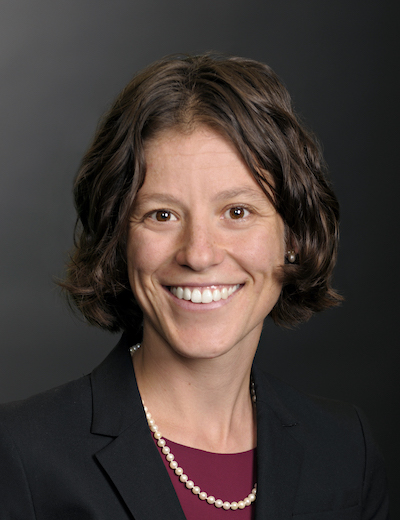 One of the bright spots in Africa’s economy in recent years has been the growth of Nigeria’s technology sector, which now generates almost 10% of GDP according to some estimates. The sector provides many high-wage jobs – in a country with few of them – producing web applications and other internet services for 100 million domestic mobile phone owners. One would think, therefore, that the Nigerian government would be doing all it can to support its growing tech sector to help foster job creation and economic growth.

Yet when it comes to the provision of electricity – a crucial input for the technology sector – the government consistently stands in the way of firms rather than pushing them forward. In a recent survey of Nigerian tech firms, a majority reported experiencing one power outage per day or more, lasting 2-3 hours each on average. Most firms described these power outages as “major” or “severe” obstacles to their businesses’ success (Ramachandran et al. 2019). Yet just last month, the Nigerian Minister of Power reported – almost proudly – that Nigerians are now enjoying 18 to 24 hours of power per day.1 In other words, power outages now last only up to 6 hours per day.

The novelty of our study is that we take a long-run general-equilibrium approach to answering these questions, meaning that we build a structural model that takes into consideration the effects of eliminating outages on average wages, firm entry, average firm size, generator purchases, and other macroeconomic variables. The reason there are power outages in our model is that prices of electricity are (exogenously) regulated below market-clearing levels. As a result, electricity producers supply very little power, and therefore aggregate electricity supply ends up being below the aggregate demand from firms. A paper by Burgess et al. (2020) colourfully motivates this modelling assumption, with a focus on how prices are severely distorted downward in the Indian power sector, causing the chronic power shortages. Eberhard et al. (2011) document how similar distortions characterise electricity provision in Africa as well.

Power outages have several deleterious effects on the economy in our model. The most obvious is that during power outages, firms cannot operate capital that requires electricity, forcing them to either temporarily shut down or to continue operating, possibly at reduced capacity, using expensive electricity that they produce themselves from a generator.

We calibrate our model to match the main aspects of electricity use in five large sub-Saharan African economies – Ethiopia, Kenya, Nigeria, Tanzania, and Uganda – and then use the model to simulate the long-run effects of permanently eliminating outages. In the model, this comes about by raising prices of electricity to levels that would clear markets, which applies a substantial increase in the amount of power actually produced in the economy.

We find that long-run aggregate productivity rises substantially when power outages are eliminated. Figure 1 illustrates our model’s predictions. Eliminating outages leads to large increases in output per worker in all countries, ranging from 16.8% in Uganda to 30.7% in Ethiopia. Averaging across all five countries, eliminating outages increases output per worker in the long-run general equilibrium by approximately 25%. 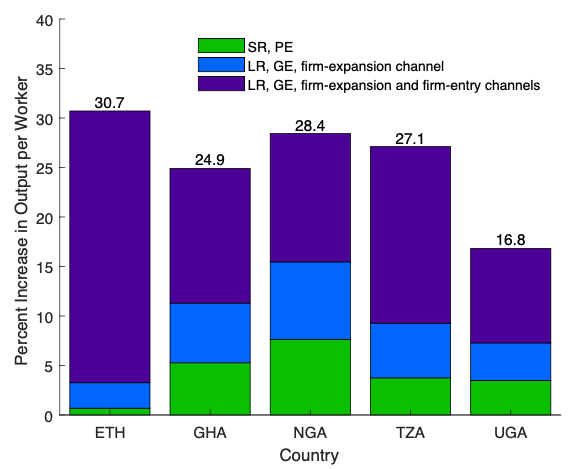 Our findings contrast with a number of empirical studies of electricity outages in the developing world that find small effects (e.g. Allcott et al. 2016). The difference stems from this previous literature’s focus on partial equilibrium (‘all else equal’) counterfactuals based on regression analyses. The idea in these studies is to look at a fixed set of firms and measure how much more productive they are in periods with fewer power outages compared to periods with more outages. We argue that this approach identifies only one component of the total effect of outages on aggregate productivity (measured by output per worker). In particular, it misses the fact that eliminating power outages changes firms’ expectations, which changes their behaviour. If firms know that there will be no outages in the future, they are likely to increase investment and hiring because there is no risk of having to idle capital and workers during an outage or of having to pay the higher cost of self-generated electricity. Moreover, eliminating outages makes producing with electricity-using technologies more attractive, implying that more firms will choose to use these technologies, which are also more productive than their traditional counterparts.

The different coloured segments of each bar in Figure 1 represent the output per worker gains from each of these effects. The green segment represents the short-run partial equilibrium effect of eliminating power outages that has been the focus of previous studies; the blue and purple segments capture the effects of the changes in firm expectations from eliminating power outages.  The blue segment measures the increase in output per worker from the increases in investment and hiring by firms that were already producing with electricity-using technologies; the purple segment measures the increases in output per worker from new firms choosing to produce with electricity-using technologies. As one can see from Figure 1, the short-run and partial equilibrium effects of eliminating outages are small, as existing studies have found, but the long-run and general equilibrium effects are large, as policymakers have intuited.

Higher electricity prices are countered by much higher wages

What about those higher electricity prices? Isn’t this bad for the poor and vulnerable, who now have to pay higher prices for their electricity? After all, it is precisely these workers who the electricity subsidies and other distortions holding prices low are meant to help. In the long run, at least, the answer is no. Our model predicts that the increases in output per worker causes wages to rise by 19%, on average. While households would have to pay a higher price for electricity (though household electricity consumption is not in our model), the increase in wages likely dominates the increase in electricity costs, which in practice represents a small fraction of the typical household’s budget.

The challenges from higher electricity prices are likely to be more salient in the shorter run (though this is admittedly outside the scope of our model). The reason is that the timing of reforms matters. In order for new power producers to enter, and for other firms to expand their investments and hiring, they need to see electricity prices rise and governments make a firm commitment to keeping the power on. Thus, the government needs to act first by raising electricity prices and signalling a strong commitment to eliminating outages. Presumably, only then will new power producers enter, and the private sector firms follow by expanding operations.

Recent empirical evidence confirms our model’s theoretical predictions – namely, that eliminating outages will increase investment and hiring and cause more firms to choose to produce with electricity-using technologies (Reinkka and Svensson 2002, Kassem 2020). Additionally, we conducted our own surveys of Ghanaian and Nigerian business owners on the effects of eliminating power outages. The majority of firms in both countries reported that eliminating outages would cause them to increase hiring and investment and lead new businesses to enter their industry, consistent with the model’s predictions.

Yet the real test of our theory is whether productivity and wages rise following episodes of electricity sector reform that lead power outages to be eliminated. Unfortunately for everyone, there are not too many such episodes in the developing world as of now, though certainly some progress has been made in some countries (Jamasb et al. 2015).  Our research suggests that the long-term payoffs of making reliable power a priority that could boost Nigeria’s tech sector and others like it, could be large and will ultimately pave the way towards its economic growth and development.