Impact of access to banks on development: Evidence from Brazil 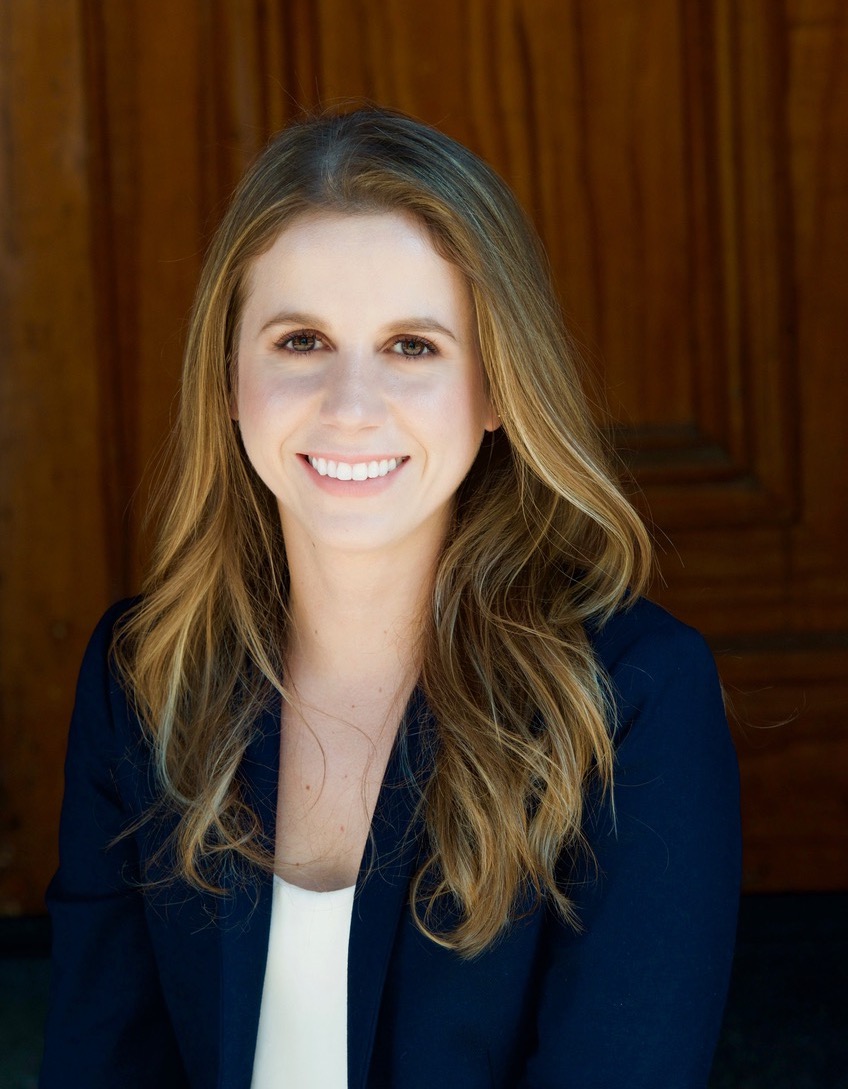 Assistant Professor of Finance, University of Illinois at Urbana-Champaign

Lack of access to financial services is pervasive in developing countries. The World Bank estimates that 1.7 billion people, the majority of whom are in poor countries, have no access to checking accounts or basic savings products (World Bank Findex Database 2017).

Absence of access to mainstream finance likely stunts economic development by reducing the level of aggregate investment and employment (Fonseca and Van Doornik (2021) for recent evidence) and distorting the allocation of capital across firms and talented entrepreneurs ( Hsieh and Klenow 2009, Buera, Kabowski and Shin 2011, Bau and Matray 2021).

It is therefore not surprising that so many developed and developing countries have implemented policies to promote access to finance in lagging regions over the past 40 years. Yet, despite widespread programmes and common-sense views on the benefits of promoting access to finance, systematic evidence remains scarce.

The Brazilian experiment: The Banco Para Todos (Banks for All) programme

In a recent paper (Fonseca and Matray 2021), we study an unusual policy experiment to provide novel evidence linking financial development with economic development. In 2004, the Brazilian federal government launched the Banco Para Todos (Banks for All) programme, which explicitly targeted underbanked cities that were not served by government-owned banks. This policy affected financial development on both the extensive margin (the entry of banks in unserved cities) and intensive margin (the volume of credit in a city). It promoted financial inclusion by inducing a large expansion in the density of bank branches and led to financial deepening by expanding the overall amount of credit. This offers us a unique natural experiment with a large, exogenous shock to financial access and capital deepening at the level of whole labour markets.

Our empirical analysis combines Brazilian administrative matched employer-employee data between 2000 and 2014, covering the universe of formal employees in Brazil, with detailed bank branch balance sheets and income statements. We trace how the 2004 policy affected the reallocation of capital and labour and provide causal evidence on the different margins through which financial development promotes economic development. We do so by comparing different outcomes at the city level for cities that benefited from the programme after 2004 (cities with no government owned banks before 2004) to cities that did not benefit from the programme because they already had government banks before.

The reform had a large effect on the financial development of treated cities both on the extensive and intensive margins. The number of bank branches, the overall amount of credit, and total deposits all increased substantially after 2004 and did not mean revert in the long run. Consistent with this development being driven by the Banco Para Todos programme, we find that all of the increase comes from the expansion of government-owned banks. By contrast, the number of branches and credit from private banks remained constant. The lack of crowding-out of private banks by government banks explains why the overall number of banks and credit increased.

Figure 1 Effects of the programme on having a bank branch B) Public versus private banks The promotion of economic development

A) Number of firms Finally, we study how the reform affected industry dynamics. Consistent with models emphasising that economic development requires countries to diversify their industrial base and explore their comparative advantage (Hausmann and Rodrik 2003, Favara and Wacziarg 2004), we find that financial development increases the number of industries and reduces the concentration of economic activity, implying that economic activity in a city becomes more diversified.

In theory, the Banco Para Todos programme could have fostered economic development for two broad reasons:

To evaluate which hypothesis better explains our results, we compare the effect of the policy in treated cities that were in ‘banking deserts’ (i.e. with no banks in close proximity to the city), assuming that monitoring costs are larger when banks are farther away. We do a similar exercise comparing industries within cities, and proxy for the presence of high fixed costs with the median establishment size in each industry.

Our results provide clear support for the importance of monitoring costs and reject an explanation based on large fixed costs. We find that the effect of the policy is concentrated in cities that are in banking deserts, while cities that are closer to other cities with bank presence gain less. In contrast, when looking within cities and across industries, we find no evidence that industries that operate at larger scale grow faster after the reform.

Since the main reason the programme fostered economic development was because it increased financial inclusion, we benchmark our estimates against the few papers that have studied the economic effect of opening bank branches. The two closest experiments to our setting are Barboni et al. (2021), which looks at the entry of bank branches in Indian villages, and Bruhn and Love (2014), which looks at the opening of bank branches in stores of a large retailer of consumer goods focused on underserved and low-income clients.

Barboni et al. (2021) find that a new bank branch leads to an 8% reduction in poverty and a 6% increase in average income. The latter is comparable to the 4.1% increase in average wages that we estimate in our setting. Bruhn and Love (2014) find similar estimates, with income increasing by 7%, employment by 1.4%, and informal businesses by 7.6%, although formal business is unaffected. Our larger effects on employment and business creation can be explained by the fact that our experiment improved financial development at the city level, and therefore is more likely to have positive ‘local general equilibrium effects’. The longer time period during which we can trace out the effect of the reform can also partially explain the difference, since resources reallocate slowly, particularly in developing countries.

Who benefited from economic development?

The last part of our analysis is devoted to understanding the distributional effect of increased financial inclusion, which is possible as we observe the universe of formal employment in Brazil. For each city-year, we compute the Gini coefficient and the mean wage for each quartile of the distribution, and again compare cities that benefited from the program to those which did not. We find a persistent increase in inequality that is driven by a much faster increase in the wage of workers at the top of the distribution. While the process of economic growth is a tide that lifts all boats (even workers in the first quartile are better off), some boats are lifted much higher. 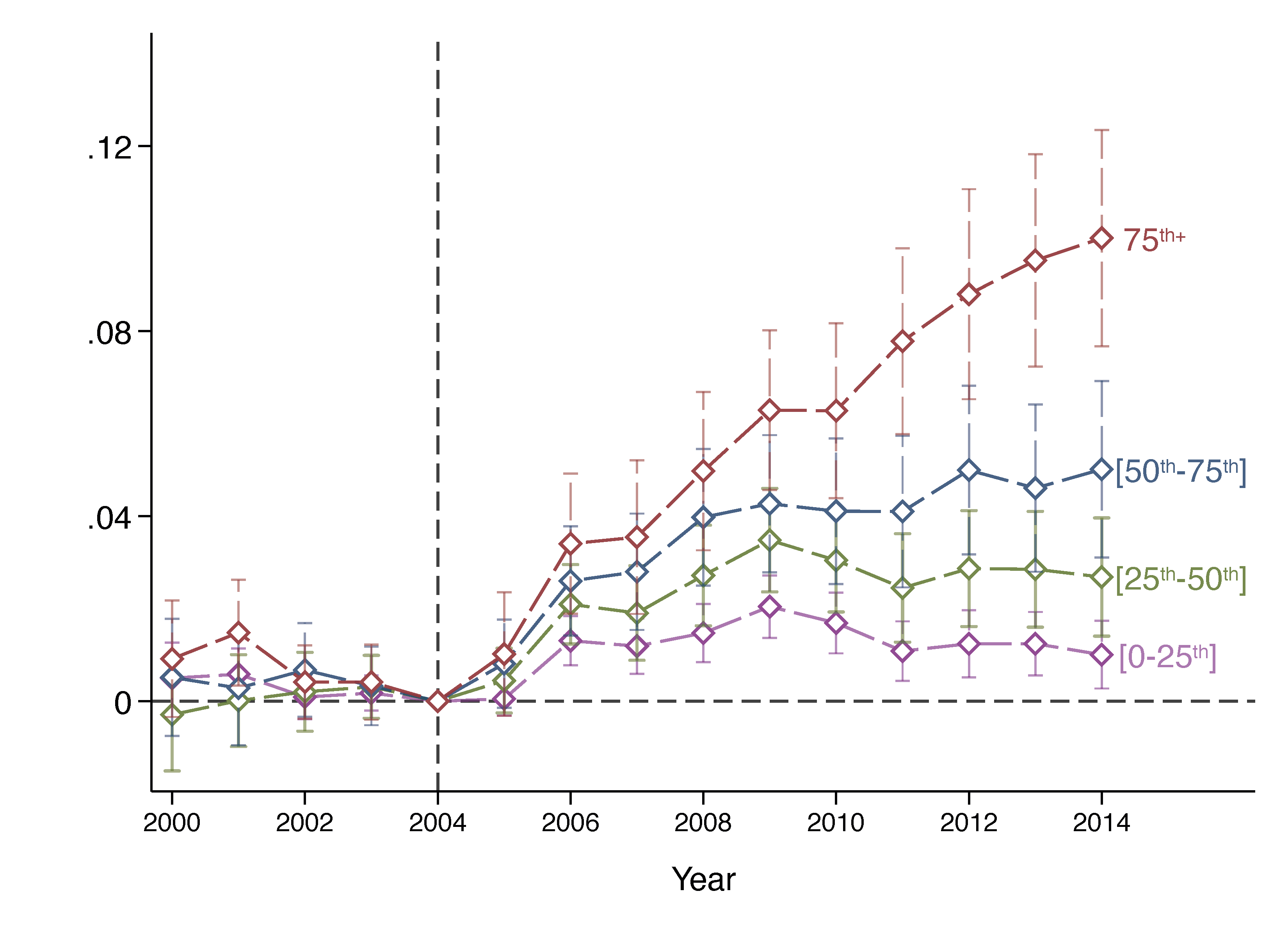 Note: The top panel shows the evolution of the Gini coefficient and the bottom panel shows the log mean wage for each quartile of the within-city wage distribution in treated cities relative to control cities.

We then explore the underlying mechanisms that could account for this increase in inequality. We first show that the difference in wage growth across quartiles largely maps a difference in wage growth along the skill distribution. We then turn to the three main explanations linking a reduction in financial frictions and an increase in skill premium: better employer-employee matching, skill-capital complementarity, or limited supply of skilled workers.

We find little evidence that better matching or increases in skilled labour-capital complementarity explains the rise in wage inequality. Instead, we find suggestive evidence that shortages of skilled workers are an important driver of increased inequality. We find that the rise in inequality is entirely concentrated in cities with an ex-ante lower fraction of educated population. Alternative proxies for skilled labour shortages yield similar conclusions.

Our paper has two important conclusions. First, in order to explain and predict how financial development reforms will affect wage inequality, it seems crucial to depart from current macro-development models which assume homogeneous labour, and instead design models which account for labour heterogeneity in addition to firm heterogeneity.

Second, the interaction between financial frictions and human capital frictions raises the question of whether governments should also implement simultaneous labour-oriented policies to reap the full benefit of formal financial market policies. This implies the potential existence of complementarities across development policies (for example, reducing financial frictions and promoting education at the same time), a topic that has so far received little attention.

This finding also has potential implications for current and future policy as developing countries promote digital banking with the goal of expanding financial access.  Digital banking can increase financial inclusion for retail customers and for small and medium-sized enterprises by lowering transaction costs but could be a source of substantial increase in inequality in the future.

Fonseca, J and A Matray (2021), “The Real Effects of Banking the Poor: Evidence from Brazil”, Working Paper.