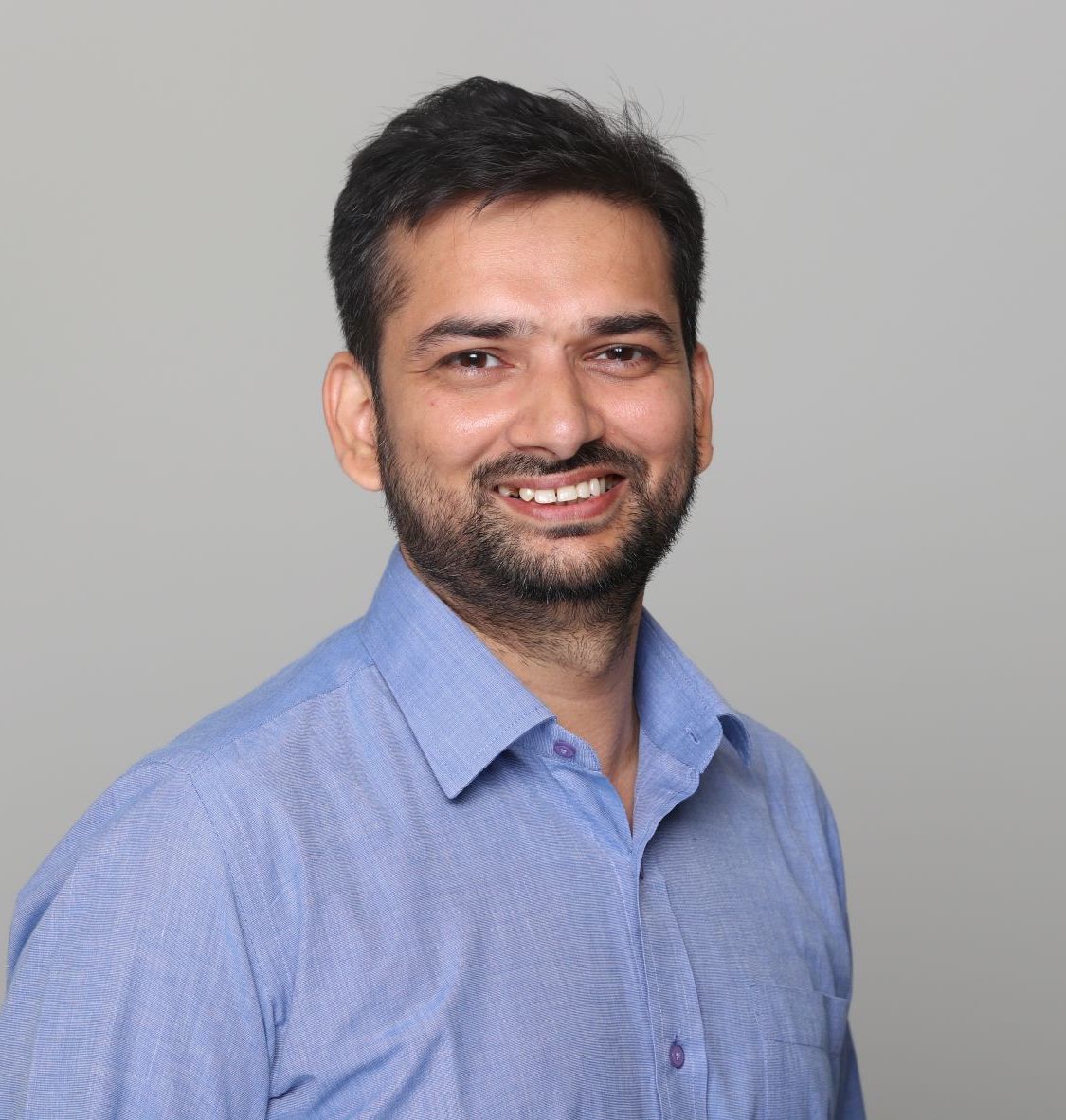 Research Associate and Lecturer, Faculty of Business and Economics, University of Basel 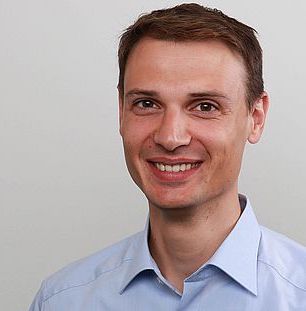 Research Associate, Faculty of Business and Economics, University of Basel

While their location in the payment chain gives payment fintechs a debt-enforcement advantage, borrower behaviour can limit their success

Debt contract enforcement is woefully inefficient all over the world, especially in developing countries (Djankov et al. 2008). This has a significant impact on credit market outcomes. When enforcement is costly, borrowers may default voluntarily, expecting that lenders will not resort to judicial enforcement. Anticipating this strategic default, lenders may be reluctant to lend—as evidenced by the association between weak enforceability of debt contract and lower availability of credit (Ponticelli and Alencar 2016, Jappelli et al. 2005).1

Weak enforcement is also associated with smaller firm size, lower firm investment, and lower output (Laeven and Woodruff 2007, Ponticelli and Alencar 2016). Payment fintechs entering the lending space could emerge as promising players for strengthening debt enforcement. In a recent working paper (Rishabh and Schäublin 2021), we explore fintech’s role as a solution to the weak credit enforcement.

A payment fintech is a technology-based company that process digital payments made by a customer to a merchant (seller or firm) who subscribes to the fintech’s payment services. In a recent yet nearly global phenomenon, payment fintechs have started offering loans to the merchants who use their payment services. The prominent examples of payment fintechs with a lending business include PayPal and Square in the USA. As a payment fintech ‘sits’ between the payments made by customers and receipt of those payments by the merchant, one that also acts as a lender can enforce loan repayment by taking a cut from the digital revenue stream of the borrowing merchant. This gives the payment fintech ‘seniority’ over part of the merchant’s income stream and reduces its reliance on costly institutional enforcement of credit contracts.

We collaborated with a major Indian payment fintech to evaluate the effectiveness of this enforcement mechanism. The fintech lends to merchants who use its point of sale (POS) machines for accepting digital payments, and links repayment to sales. We use the term 'sales' to mean the value of transactions processed by the payment company. The company automatically deducts a fixed proportion (10%) of each transaction it processes for the borrowing merchant, towards the loan repayment—essentially exercising the seniority mentioned above.

To evaluate the effectiveness of the sales-linked repayment mechanism, we study the behaviour of the borrowing merchants by analysing the sales of the borrowing merchants before and after the loan disbursal. In particular, we look for any discernible change in the sales right after the loan disbursal. We hypothesised that if merchants discontinuously reduced their sales right after the disbursal, it would indicate that they are trying to alter the sales voluntarily to avoid loan repayment. For our analysis, we divide the set or borrowers into non-performing (whose loans were significantly delayed or went into default)2 and performing borrowers.

Lender seniority is diluted because borrowing merchants may divert sales

In the figures that follow, we present the sales of the different sets of borrowers in a seven-day window around disbursal. The horizontal axis represents the days relative to the disbursal day, indicated as ‘day zero’. The vertical axis shows the daily sales normalised by the average pre-disbursal sales. Therefore, for instance, a value 0.9 on the vertical axis on a day means that the merchant’s sales are 10% lower than the pre-disbursal average on that day.

Figure 1 shows that some borrowing merchants discontinuously drop their sales immediately after the loan disbursal. This is exhibited by repeat borrowers (those who took more than one loan) and only in their second loan and subsequent loans (‘repeat loan’) as shown in panel d of the figure. This indicates that there are some learning effects because neither non-repeat borrowers (not pictured) nor repeat borrowers after their first loan (panel c) exhibit any suspicious discontinuity post-disbursal. 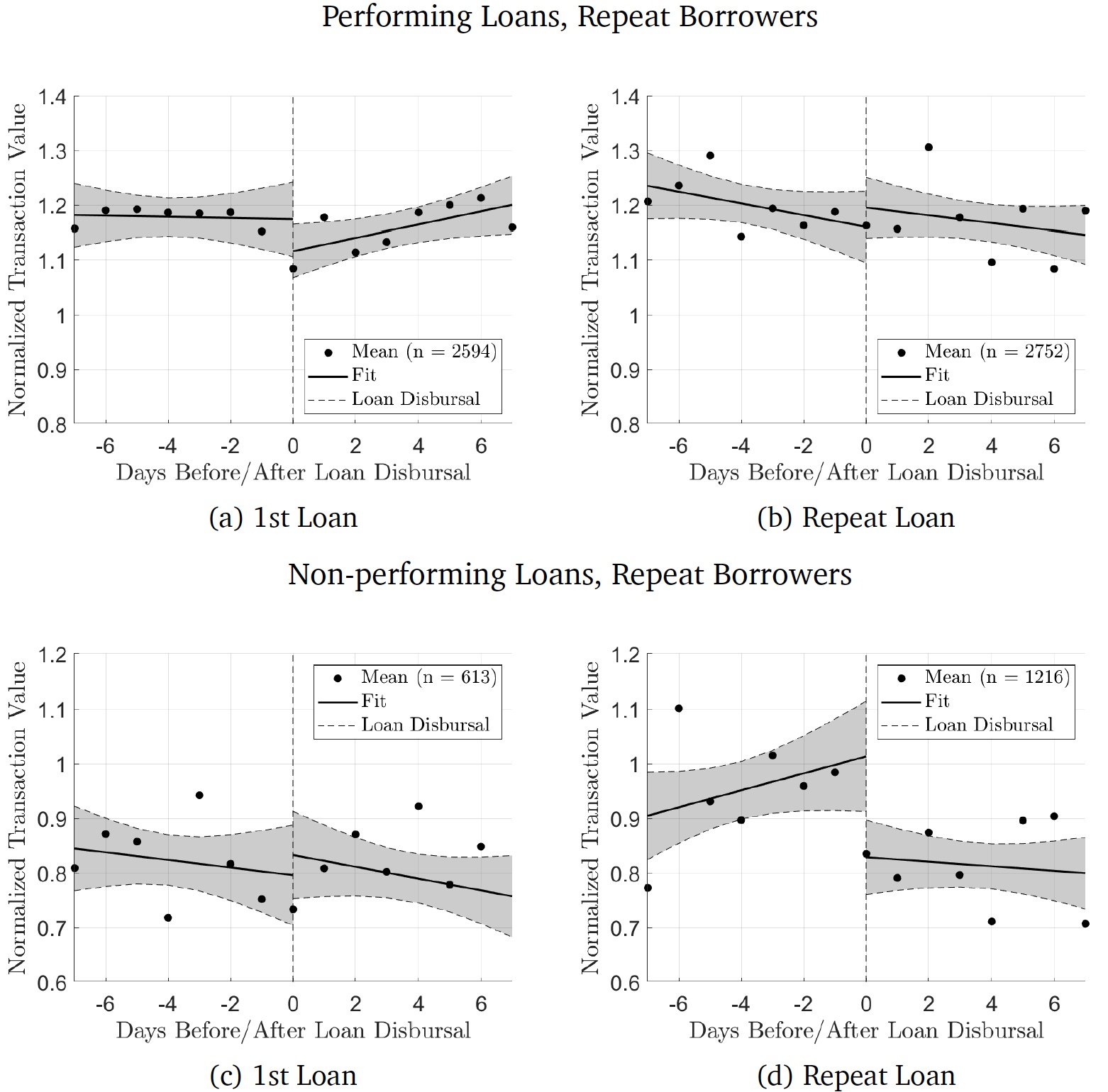 Further, only non-performing loans show a discontinuity in sales on the disbursal day, indicating a voluntary element in defaulting. Our estimates suggest that immediately after loan disbursal, non-performing borrowers (in their repeat loan) drop their sales to about 17% below their average pre-disbursal daily sales.

The possibility of manipulation by diverting sales dilutes the seniority achieved by the payment fintech and points to the limits of the automatic sales-linked enforcement mechanism.

Theoretically, competition between lenders weakens loan enforcement as the existence of multiple sources of funding diminishes the borrower’s value of a relationship with a lender and incentivises the borrower to default willfully (Hoff and Stiglitz 1998).

We divide our sample of borrowers into two groups based on the threshold level of credit score (score of 700 on the scale of 300-900) that the credit market considers being the demarcation between high and low credit quality. We can think of those borrowers with credit scores above 700 as having easy access to credit beyond the payment company and therefore more likely to default willfully. In contrast, borrowers with a low credit score are less likely to default willfully.3

Manipulators use cash to divert sales

Finally, to answer whether borrowing merchants divert their sales to cash or to other digital means, we use the exogenous shock in availability of cash that occurred in March and April 2018 in certain districts of India. These regions faced a temporary cash crunch as ATMs ran dry. A cash crunch makes it harder for firms to persuade their customers to pay in cash.

Should borrowing merchants display the same sharp downward jump in digital sales in the crunch period as in other periods, it would imply that merchants mainly use other digital means to divert sales from their lender’s platform. We find that borrowers from districts affected by the cash crunch (cash-crunch districts) show no significant discontinuity at disbursal in the cash crunch period (Figure 3, panel a), while they show a significant drop in sales in the non-crunch period (Figure 3, panel b). These results indicate that borrowers use cash, at least partly, to divert sales.

Our results suggest that debt enforcement will remain challenging as long as enforcement institutions remain weak and economies rely on cash. Rapid digitalisation should allow payment companies to play a more pivotal role in debt enforcement.

Even in current scenario, the payment fintech’s ability to deduct repayment at source could still be beneficial for the lender since that may reduce loss given default not only in non-voluntary default cases but in also cases when merchants default voluntarily. More work is required to quantify this advantage.

1 According to the World Bank, about 40% of small firms in developing countries are credit constrained, with the credit deficit aggregating to about USD 5.2 trillion and amounting to 19% of their GDP (Bruhn et al., 2017).