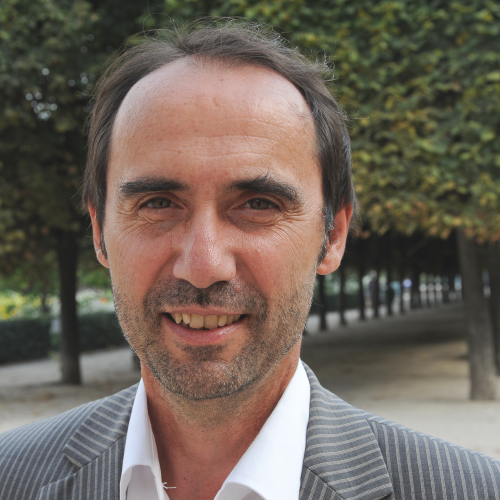 Professor of Economics in the Paris School of Economics, Université Paris I Panthéon Sorbonne

Bank of America Dean and Professor of Business and Public Policy and Economic Analysis and Policy, Haas School of Business

The developed world is deindustrialising. What does this mean and how has globalisation impacted this process?

On 13 December 2017, when the Eleventh Ministerial Conference of the World Trade Organization in Buenos Aires broke up, WTO Director-General Roberto Azevedo regretted the lack of progress in negotiations on what he called "the hard grind of multilateralism". “Members did not manage to agree on final, substantive agreements this time”, he said.

This backlash against globalisation, which has gained momentum over the past few years, stems primarily from workers’ disconnect with the perceived effects of deindustrialisation in developed countries. A lot has been written about the impact this backlash will have on developing countries (see the video with Dave Atkin here on VoxDev). In this column, we focus on unpacking the concept of deindustrialisation, or what we call the ‘factory-free economy’, and the role globalisation has to play in it.

We usually think about deindustrialisation in rich countries as a structural transformation, a shift of the value added from manufacturing to services as income per capita increases. In this column, based on our book titled The Factory-Free Economy (Fontagné and A Harrison 2017), we instead focus on the microeconomic mechanisms underlying this transformation.

What is the factory-free economy?

The factory-free economy, or a deindustrialised economy, is the successor to the factory system and the assembly line and is the culmination of two evolutionary processes:

These two profound changes have had an unprecedented impact on labour markets, some of which have spurred the backlash against globalisation. The impact is currently concentrated in the developed world, with knock-on effects transcending countries, sectors, and industries.

Such an economy is characterised by the declining role of the manufacturing sector. But the very definition of manufacturing firms is also changing.

If we accept that value added is concentrated in segments of the value chain like R&D, design, distribution, and after-sales services, which are all connected to the service economy, then the statistical definitions of 'manufacturing' and 'services' are no longer operational.

Factory-less producers develop and market new products without any tangible operation on goods or materials. This process, known as the ‘servitisation’ of the manufacturing sector, has led to a situation where the sales of manufacturing firms are mostly made up of services. Major producers of goods are part of the services industry, due to their concentration on the two extremes of the smile. For example, Japan specialises in electronic equipment but due to its scarcity of resources, it offshores most industrial tasks to low-cost locations while focusing on the design and distribution tasks.

Another example is the servitisation of French manufacturing firms. While 83% of these firms that are officially classified as manufacturing firms, sell some services, 40% sell more services than goods, and 26% do not even produce goods (Crozet and Milet 2017).

Simultaneously, some firms that have been classified outside the manufacturing sector are heavily involved in the production of manufactured goods. The ‘factory-less goods producers’ that design goods and coordinate production have traditionally been classified in wholesale trade sector. The US Census Bureau has responded, and since 2017 it has treated these firms as manufacturers.

Changing boundaries of the firm: Core competencies, offshoring and globalisation

If manufacturing firms increasingly create services, while sourcing and design activities are performed by factory-less goods producers whose activities were once done by manufacturers, this need not be a contradiction. The boundaries of the firm – especially for multinational companies – are adjusted to focus on core competencies. These competencies have evolved.

This raises two questions: What should the firm internalise? How has globalisation shaped these choices?

There is no one-size-fits-all strategy. Different firms, with different productivity levels, working in industries relying differently on intangible assets, will make different choices. The decision is not always to outsource.

A Eurostat survey conducted in 15 European countries on the decision to offshore between 2009 and 2011 showed that only 4% of French firms, representing 6.5% of employees in the firms within the scope of the survey, reported a decision to offshore. Uncertainty about the quality of goods and services produced in the offshore location, the need for close interaction with clients, legal and administrative barriers in the host country, and union problems in the home country, eventually led a further 3% of firms, that had contemplated offshoring, not to do so (Fontagné and D’Isanto 2017).

Globalisation has been instrumental in the redefinition of firms’ boundaries. Between 1983 and the onset of the global crisis in 2008, US manufacturing employment declined from 22 to 16 million workers. At the same time, employment in the foreign affiliates of US multinationals in low-income countries nearly tripled (Figure 1).

Figure 1 Trends in domestic and affiliate employment among multinational firms 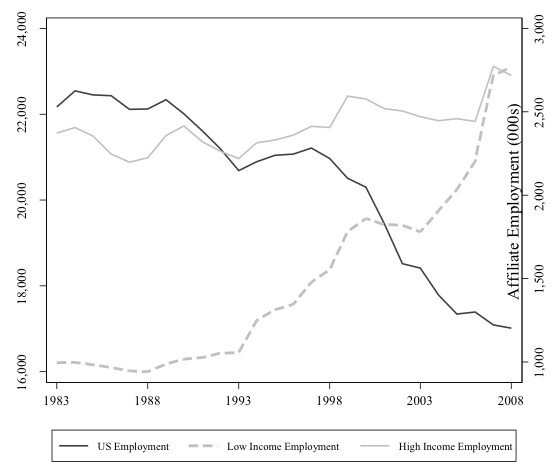 An analysis to 2008, which includes a period characterised by rapid increases in offshoring, especially to China, and a disaggregation of the impact of distinct locations (for example, China, Mexico, and India) of offshore employment changes on domestic US wages sheds new light on this debate (Ebenstein et al. 2017). Offshoring to low-wage countries is associated with wage declines for US workers. The workers most affected are those performing routine tasks – a 10% increase in occupational exposure to import competition is associated with a 2.7% decline in real wages for workers who perform routine tasks.

This analysis is based in occupational rather than industrial-level data. The occupational exposure measure captures the movement of workers out of manufacturing and into lower wage services, as shown by Current Population Surveys data. This highlights the importance of examining the impact of globalisation by looking beyond workers only employed directly in manufacturing – industry and services must be jointly considered in the factory-free economy.

The nature of globalisation has changed the number and nature of manufacturing jobs in Europe, and more generally in advanced economies. Manufacturing jobs in the north will continue to decline, which may feed populism. Firms in these countries may well continue to extract a large share of value added through their role in product design and research and development, as well as sales, marketing, and after-sales services.

While for many years international economists downplayed the transactional costs associated with structural changes, it is increasingly evident that globalisation imposes significant transaction costs. These costs are borne disproportionately by less skilled workers. One of the greatest challenges of the twenty first century will be how to improve the lives and opportunities of those left behind.

Growth in developed economies is now fuelled by talents and their agglomeration and if there is something like a factory, this is now the big city where talents, ideas, and services can be combined (Baldwin 2017). These shifts will support the ever-increasing importance of cities, with urban policy becoming the new frontier for industrial policy.

Bernard, A and T Fort (2017), “Factoryless goods producers in the US”,  in L Fontagné and A Harrison (eds), The Factory-Free Economy: Outsourcing, Servitization, and the Future of Industry, Oxford University Press.

Crozet, M and E Milet (2017), “The servitization of French manufacturing firms”, in L Fontagné and A Harrison (eds), The Factory-Free Economy: Outsourcing, Servitization, and the Future of Industry, Oxford University Press.

Ebenstein, A, A Harrison and M McMillan (2017), “Why are American workers getting poorer? China, trade, and offshoring”, in L Fontagné and A Harrison (eds), The Factory-Free Economy: Outsourcing, Servitization, and the Future of Industry, Oxford University Press.

Fontagné, L and A Harrison (eds) (2017), The Factory-Free Economy: Outsourcing, Servitization, and the Future of Industry, Oxford University Press.

Fontagné, Land A D’Isanto (2017), “Fragmentation: Survey-based evidence for France”, in L Fontagné and A Harrison (eds), The Factory-Free Economy: Outsourcing, Servitization, and the Future of Industry, Oxford University Press.