Violent crime presents a major development challenge today in many of the world’s poorest countries and regions. According to the latest Global Study on Homicide by the United Nations Office of Drugs and Crime (UNODC), South Africa and Central America had the highest homicide rates on record, averaging more than 25 victims per 100,000 inhabitants, followed by South America, Central Africa, and the Caribbean, averaging between 16 and 23 homicides per 100,000 inhabitants.

Violent crime not only imposes direct costs on society through mortality, but also induces indirect economic costs by distorting workers' and firms' decisions. These distortions can be reflected in large changes in market prices and market size.

Putting aside data availability issues on measuring violent crime, which are common in most developing countries, a simple comparison of the firm dynamics in regions with higher and lower violent crime can be misleading:

How can we overcome these measurement issues to explore the impacts of violent crime in market prices and size?

The case of Colombia

A dramatic reduction in violent crime

Colombian history offers an ideal setting to explore the effects of violent crime reductions on local economic activity. In the early 1990s, it was the second-most violent country in the world according to homicide rates. This violent period was followed by a remarkable improvement in security conditions. The right panel of Figure 1 illustrates the dramatic reduction in homicide rates observed in Colombia between 1995 and 2010. 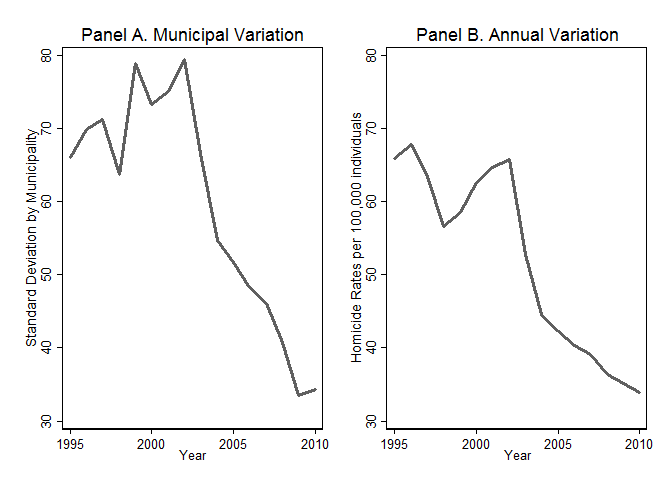 Source: Rozo (2018), based on data from the Colombian Human Rights Observatory.

An important determinant of the reduction in violent crime was the large investments that the administration of Alvaro Uribe put forth in security expenditures. My research shows that there was a strong temporal correlation between the beginning of Alvaro Uribe’s presidential administration in 2002 and the improvement in security conditions in Colombia. According to the Colombian Observatory of Human Rights, between 2002 and 2010, homicide rates fell by 48%, from 66 to 34 homicides per 100,000 inhabitants. Figures from the US State Department show a similar trend, suggesting reductions of 83% in kidnappings and 76% in terrorist attacks between 2002 and 2010.

To precisely measure the effects of violent crime on firm behaviour, I use the large reductions in violence caused by increased security expenditures of the Democratic Security programme under Uribe's administration. According to the Uribe’splan published in 2003, the Democratic Security programme aimed at restoring police presence in all municipalities; dismantling terrorist organisations; reducing kidnappings, extortion, and homicides; preventing forced displacement; and fighting the illegal drug trade (Ministerio de Defensa 2003). Uribe’s government intended to achieve these goals by increasing spending on military infrastructure, personnel, and intelligence. High spending on security led to decreased violence in municipalities that voted for Uribe in the presidential elections of 2002 (when he was elected for the first time) as he was looking for re-election in 2006 (he was re-elected). Figure 2 illustrates that the change in homicide rates after Uribe was in office was more intense for municipalities that supported his electionrelative to the municipalities that showed less support. 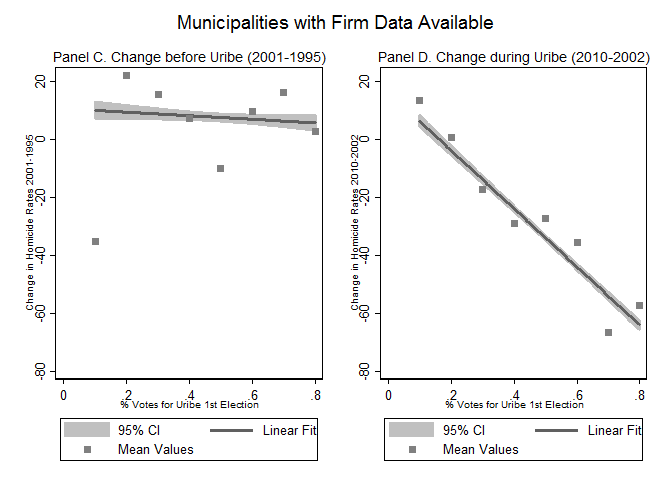 Source: Rozo (2018), based on data from the Human Rights Observatory and the Registraduría Nacional del Estado Civil.

I combine unique plant-level and rich consumer pricing data with homicide rates and electoral results in Colombia. Using these data, I compare the prices and market size of Colombian municipalities that showed higher and lower support for Alvaro Uribe in the presidential election of 2002. These correlations were subsequently reflected in larger or lower changes in homicide rates.

I find large effects due to changes in violent crime:

A simple calculation using my results suggests that the 48% decline in homicide rates between 1995 and 2010 in Colombia increased aggregate production by 19.6%. My estimates, however, are a lower bound of the total social costs of violent crime, as they are do not include the costs of mortality or the long-run impacts of violent crime reductions. The benefits of reducing violence, consequently, are even higher. Investments in security improvements are thus an effective way to boost economic development.

Rozo, S (2018), “Is Murder Bad for Business? Evidence from Colombia”, Review of Economics and Statistics, forthcoming.