The winners and losers from partial health insurance 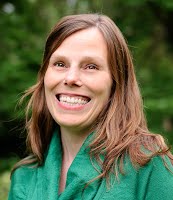 Associate Professor, Department of Economics, University of Illinois at Urbana-Champaign 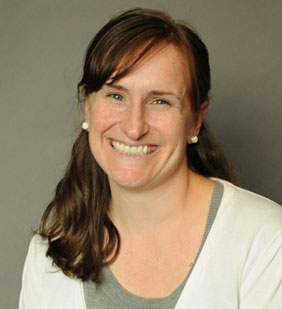 Health insurance for families in Nicaragua had a positive impact on parents and their insured younger children, but not on uninsured older children 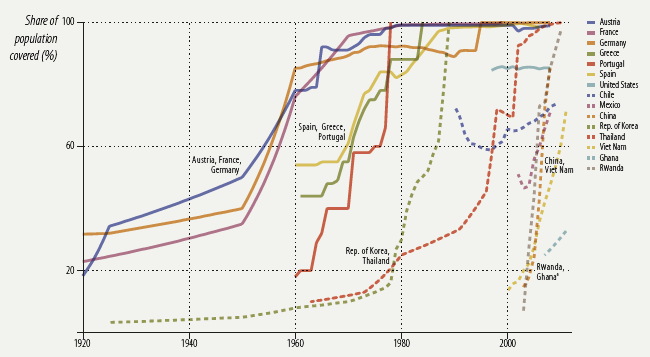 The benefits may be particularly large for children, as investments in healthcare accumulate over time (Cunha et al. 2010). Yet there has been limited research into the effects of health insurance for children or families. This is partly due to the difficulty of getting the right data from which to estimate the benefits.

The effect of voluntary health insurance is difficult to evaluate because sicker people disproportionately enrol in insurance (Akerlof 1970, Arrow 1985). As a result, comparing outcomes – such as the number of doctor’s visits or out-of-pocket costs – between people who are insured and those who are not is likely to misrepresent the actual effectiveness of insurance.

Recently we analysed the first randomised study in a developing country that evaluates the effect of parental health insurance on the health of their children (Fitzpatrick and Thornton, forthcoming).

Because families have shared budget and time constraints, when only some family members are insured, there may be indirect effects on the rest of the family. Some of these could be positive, some negative. For example:

This led us to ask how families reallocate resources when only some members were insured.

We studied the pilot of a voluntary health insurance program in Nicaragua. Citizens who work in formal employment are automatically enrolled in the Nicaraguan Social Security Institute’s health insurance programme. The programme offers preventative, diagnostic, and curative health services to those enrolled that they can use at covered health providers. In Nicaragua these are known as Empresas Médicas Previsionales. There is also a large population of unemployed, self-employed, or informal-sector workers, however, who are uninsured. They can use free public clinics, but in practice these clinics can be overcrowded, underfunded, and offer lower-quality care. It is common for many in the informal sector to self-medicate at pharmacies. Many must manage without care entirely.

In January 2007, the Nicaraguan government piloted a programme that gave informal sector workers the opportunity to buy government health insurance. Under the programme rules, children under the age of 12 were fully covered for paediatric care, but children over age 12 were not eligible.

To study the effects of this programme, we interviewed uninsured, informal-sector workers in Managua, Nicaragua. The survey asked detailed information about healthcare for the respondent, plus members of the family aged 16 and under. At the end of the survey, respondents opened a sealed envelope that contained an informational brochure about the health insurance product. Half of them were offered six months of free health insurance, which was worth about $100.

Working with the government social security office, we were able to measure whether the study participants signed up for the health insurance programme. One year later, we returned and asked questions about how they used healthcare and how much they spent on it, for themselves and their children.

Our study included more than 1,600 informal workers with children aged 15 or under. In total, we analysed the effects for almost 3,000 children.

Parents chose to enrol, but only at a heavily subsidised price. With the six-month subsidy, 35% of parents chose to enrol, compared to 2% of the parents who were not offered a subsidy. These rates may seem low, but they are comparable to similar studies of voluntary health insurance programs for low-income populations. In Kenya a study found enrolment rates of only 17-40%, depending on subsidy levels (Chemin 2014); one in Cambodia 47% enrolment (Levine et al. 2016). In the US, offering low-income adults Medicaid health insurance increased enrolment by only 25 percentage points (Finkelstein et al. 2012).

We also saw large effects on eligible children (recall, those aged 12 and under). Those with insured parents were 22.6 percentage points more likely to visit a covered provider, and had 0.56 more visits at covered providers. But unlike the adults, we did not observe substitution away from other providers. Insured children increased overall healthcare utilisation substantially. Compared to similar children in uninsured families, insured children made 1.2 more visits to all healthcare providers combined, a 36% increase. We found no conclusive evidence that insurance had lowered out-of-pocket expenditures for these children (Figure 2).

Figure 2 Impact of household health insurance on children, by eligibility 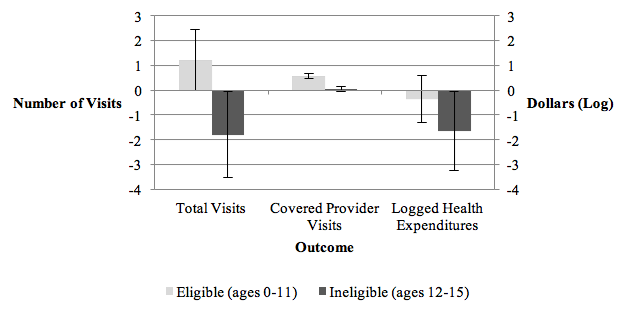 There are several lessons from this study: