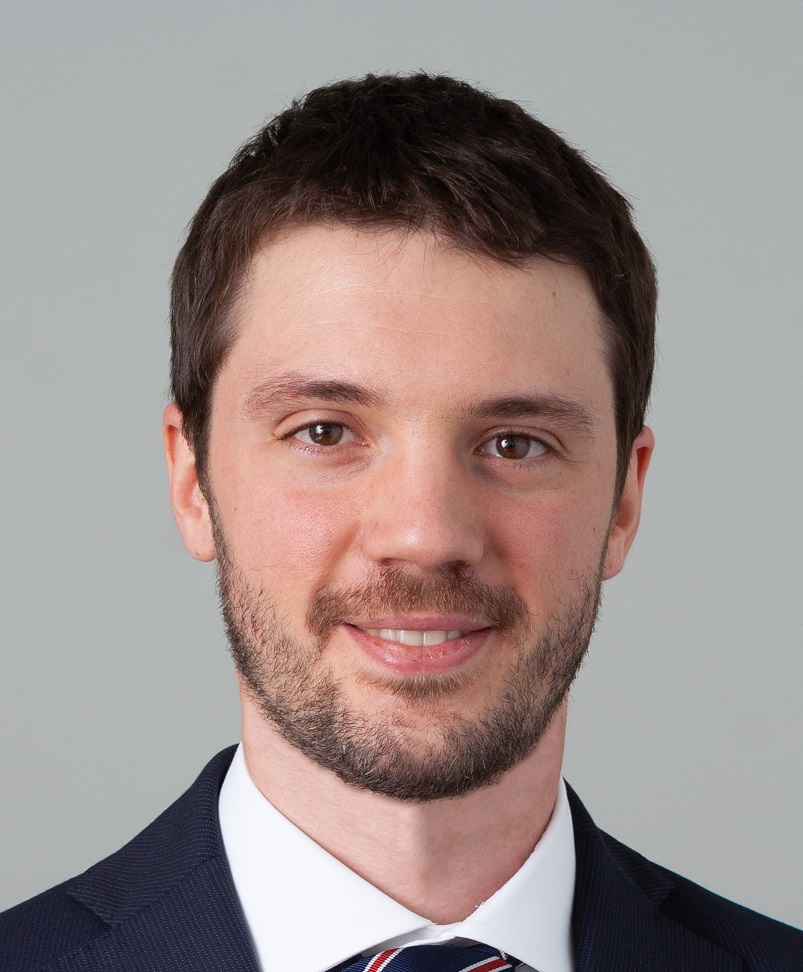 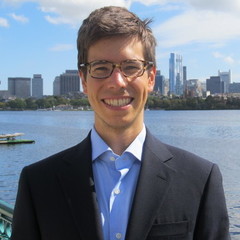 During the past 60 years, the world has become significantly more integrated. Around the same time, the number of democratic countries has increased substantially, moving from 48 (out of 109 for which data are available) in 1960 to 121 (out of 166) in 2015. Figure 1 depicts these trends, plotting the averages across countries of the democracy index constructed by the Polity IV project (red line) and the value of trade as a share of GDP (blue line). As is evident, the lines strongly co-move, suggesting a potential relationship between the two phenomena. Given the positive effects that democracy can have on economic growth (Acemoglu et al. 2019, Papaioannou and Siorounis 2008, Rodrik and Wacziarg 2005), understanding if, and how, economic integration favours democratisation is a first-order question. 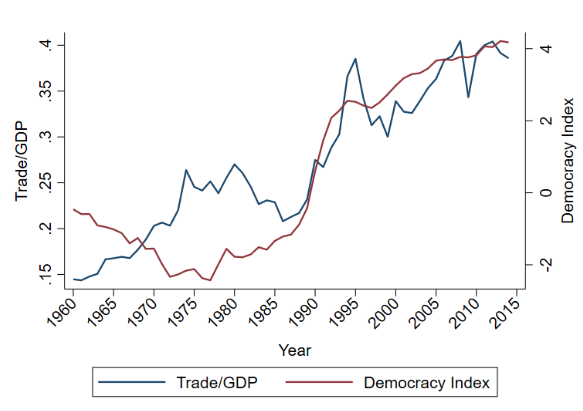 The challenges of establishing an effect

Estimating the causal effect of economic integration on democracy is challenging for several reasons:

In our paper (Magistretti and Tabellini 2019), we study if economic integration has a causal effect on democracy using a large panel dataset of countries that covers the period 1950-2014. To overcome empirical challenges, we build on recent work by Feyrer (2019), where the author studies the effects of trade on economic growth. The intuition behind this strategy is that the ‘effective distance’ – i.e. the combination of actual distance and the technology available to cover such distance – between any pair of countries can change over time because of technological advancement. Specifically, air-freight has become substantially cheaper over the last 60 years, while the cost of sea shipping has not declined nearly as much (Hummels 2007, Feyrer 2019).

These differential trends have generated a larger reduction in the ‘effective distance’ between country pairs with similar sea distances but shorter air routes, such as India and Nigeria as compared to Mexico and China. Since the change in shipping costs has been relatively uniform across the globe, its differential effect on trade flows between country-pairs can largely be attributed to geography rather than country-specific economic or political dynamics. A similar strategy has been used also in Pascali (2017) with respect to the shift between sail to steam shipping in the second half of the 19th century.

Building on this intuition and relying on the ‘gravity law’ emphasised in trade literature, which models bilateral trade flows as a function of geographic distance (Anderson and Van Wincoop 2003), we construct a measure of predicted trade between countries based on elasticities of bilateral trade flows to air and sea distance that we allow to vary over time. Figure 2 plots these elasticities, with respect to sea (red line) and air distance (blue line). It shows that the importance of air distance has increased significantly between 1950 and 2010, whereas that of sea distance has remained largely unchanged. Specifically, the figure reveals that air transportation has become increasingly important for trade flows over time. 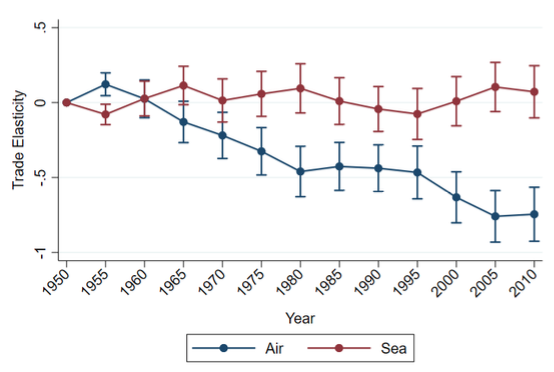 The magnitude of these results is sizeable. Doubling economic integration with democratic partners for a country during a five-year period raises the Polity IV democracy score index by almost three points. This corresponds to the difference between the democracy score of Tunisia in 2014 and that of full democracies. Since economic integration with democratic partners more than doubled at least once in a five-year period for one-quarter of the countries in our sample (e.g. Mozambique between 1985 and 1990, Poland between 1970 and 1975, and South Korea between 1960 and 1965), the effects we estimate are economically large. Following Acemoglu et al. (2019), we also investigate how these effects add up over time, documenting that the long-run effects are more than twice as large as their ‘static’ counterparts.

These results are consistent with a process of institutional learning or cultural transmission, whereby values and institutions are transmitted from more to less democratic countries through trade and, more generally, economic integration. This interpretation is related to the notion of ‘democratic capital’ proposed by Persson and Tabellini (2009). This concept concerns the idea that a country’s experience with democracy, as well as the history of democracy in neighbouring countries, reduces transitions out of democracy and raises the exit rates from autocracy.

The idea of institutional or cultural transmission is also in line with findings from Barsbai et al. (2017), who show that emigration from Moldova to Western Europe favoured the emergence of democracy in the sending country via cultural and informational transmissions. To corroborate our interpretation, we show that the democratisation effect of economic integration with democratic partners is larger for countries with lower initial levels of institutional and infrastructural development. Indeed, these are precisely the countries that have more to learn from their more democratic trade partners.

Overall, our paper suggests that economic integration may benefit less-democratic countries not only directly by fostering GDP growth (Frankel and Romer 1999, Feyrer 2019), but also indirectly by favouring the transition to democracy, which can in turn be desirable for both socioeconomic and political reasons (e.g. Acemoglu et al. 2019, Acemoglu and Robinson 2012). Our study cannot disentangle whether the transmission mechanism operates from the ‘bottom up’, with citizens of autocratic countries demanding the extension of the franchise (Acemoglu and Robinson 2006), or if autocratic rulers learn from their partners (Buera et al. 2011). We plan to explore these questions in future research.

Barsbai, T, H  Rapoport, A Steinmayr and C Trebesch, (2017). “The effect of labour migration on the diffusion of democracy: Evidence from a former Soviet Republic”, American Economic Journal: Applied Economics 9(3): 36-69.

Hummels, D (2007), “Transportation costs and international trade in the second era of globalisation”, The Journal of Economic Perspectives 21(3): 131–154.