The impact of media censorship in China: 1984 or Brave New World?

Freedom of expression is the foundation of any free, democratic, and civic society. As a fundamental human right, it underpins most other human rights and allows them to ﬂourish. Access to accurate information is vital if democratic systems and market economics are to work well (DellaVigna and Gentzkow 2010). Yet, in 2017, only one in seven (14%) of the world’s population had access to a media free from censorship (Freedom House 2017).

Media censorship is most common in authoritarian regimes. Countries such as China block foreign websites so that uncensored, potentially regime-threatening information is out of the reach of citizens. Scholars have been arguing for many years that censorship is key to the popular support and stability of these regimes (Ford 1935), but we still have little direct empirical evidence about what happens if we were to remove that censorship. Would providing uncensored access to the internet lead citizens to seek out politically sensitive information? And, if they did, would it change their beliefs, attitudes, and behaviour?

We typically assume the answers to both questions are 'yes', but this is not clear. Citizens with access to uncensored internet may not seek out politically sensitive information because of several reasons such as lack of interest in politics, fear of government reprisal, or unawareness or mistrust of foreign media outlets. And, even if they sought out this information, they still may not change their attitudes and beliefs afterwards.

A field experiment in China

To answer the questions discussed above, we randomly assigned 1,800 university students in Beijing to either a control condition, in which their internet use was subject to status quocensorship, or to a treatment condition in which they were given tools to bypass internet censorship for free for 18 months (Chen and Yang 2018). These tools are not unknown: approximately 21% of the students had already purchased tools that would bypass censorship before our experimental intervention. These students were, in general, richer and more liberal-minded than the average student. We assigned the access treatment only among those students who were not existing users.

A subset of the treated students also received temporary encouragement for four months to visit the Chinese edition of the New York Times, which is usually blocked by government censorship.

The impact of removing censorship

1. On search for sensitive information

We found that access to uncensored internet alone had little impact on whether students sought out politically sensitive information. Nearly half of the students did not use the tools to bypass censorship at all. Among those who did, almost none spent time browsing foreign news websites that had been blocked (see blue line in Figure 1). The demand for uncensored, politically sensitive information among these students was low. This is an important reason why they do not consume such information, in spite of the low cost of acquiring it.

Note: Figure shows average total browsing time (in minutes) on the New York Times per week, among students received only the access treatment and those who received both access and encouragement treatment. Dotted line (y-axis on the right-hand side) indicates the proportion of articles published on the New York Times Chinese edition that are politically sensitive.

2. On encouragement to consume Western media

On the other hand, modest and temporary incentives tovisit Western news outlets led to large and persistent increases in the acquisition of politically sensitive information. Students spent on average 435% more time on the New York Times, even after the incentivised encouragement ended (the red line in Figure 1).

This suggests that demand for information is not inherently low. Fear of government reprisal was also not likely to be the reason students did not use their access. Instead, it appears that they underestimated of the value of uncensored information. When they were exposed to foreign news outlets persistently, it increased reported trust of foreign news. Afterwards, they were willing to pay a higher price for the access (see Figure 2).

3. On students’ knowledge and attitudes

Finally, we found that exposure to politically sensitive informatio brought broad, substantial, and persistent changes to the knowledge, beliefs, attitudes, and intended behaviour of students. The free access and temporary incentives made students:

The effect was the largest among students who have limited access to alternative sources of uncensored information, for example, those from disadvantaged backgrounds. 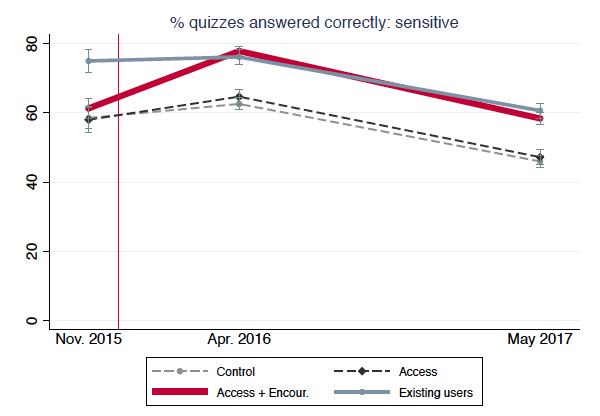 Note: Quizzes cover a set of events occurred during the two months prior to each survey wave; they do not cover events that are directly mentioned in the encouragement treatment.

Implications: Low demand for information means complete censorship may not be required

Our findings suggest that demand-side factors are important for understanding how internet censorship works in China today. After years of censorship and propaganda campaigns, the current level of demand is low. As a result, initiatives that passively supply access to uncensored internet to citizens in authoritarian regimes are unlikely to be as effective as we might imagine. The Chinese government may not need to pay the high costs of fully 'sealing off' its internet; it can afford to leave some holes open as there seems to be a low chance that the masses will respond to negative news shocks. As a result, the elites that demand more open access to information can be pacified, and business interests that rely on global internet connections need not be sacriﬁced.

Demand-driven censorship is not unique to contemporary China. The current Russian regime enforces repressive censorship over TV while leaving the internet, and in particular social media, largely uncensored. During the Cold War, the East German government employed heavy propaganda and censorship campaigns. But at the same time, it didn't stop its citizens from purchasing antennae that could access West German TV if they were interested enough to do so.

Our study finds internet censorship in China is effective not just because the regime makes it difﬁcult to access sensitive information, but also because it fosters an environment in which citizens do not demand this information in the ﬁrst place.

Nevertheless, our ﬁndings do not imply that the Chinese regime can safely eliminate the ‘Great Firewall’. The current cost of getting around government censorship imposes a huge cost on foreign news outlets. If they didn't have to pay these costs, outlets such as the New York Times might begin to raise demand among Chinese readers. Removing the Great Firewall could additionally raise the demand for uncensored information by signalling the quality of foreign media to citizens. This might make reading and watching foreign media more socially acceptable, or even shift the tone of domestic news reporting. If the calls for uncensored information became louder, it would be hard to silence them. This could generate substantial pressure on China's censorship apparatus.

*Note from the Editor-in-Chief: Over this week, at VoxDev, we decided to tackle the broader question of the role of media in economic development. All three articles this week are linked through this common theme. We opted for this theme given the recent work on the role of the media, and social media in particular, in the developed world (for example, The spread of true and false news online, and Economic and Social Impacts of the Media), all amidst the Cambridge Analytica scandal. Clearly, media and social media are extremely persuasive and have important effects in the developed world. We decided it was high time to build a series around similar issues in the developing world – so here it is. Enjoy!

Ford, G S (1935), Dictatorship in the Modern World, The University of Minnesota Press.