In recent years, it has become clear that characteristics of pre-colonial African societies are an important determinant of their current economic development. Existing studies have tended to focus on the role of historical political centralisation, and have found a positive relationship between historical statehood and income today (Gennaioli and Rainer 2007, Michalopoulos and Pappaioannou 2013, 2014). However, there are many other differences across African societies beyond their levels of state centralisation. For example, groups also differ in terms of family structure, the importance and function of kinship networks, and the centrality of age as an organising force. Variation in these social institutions – many of which remain in force today – might also have important consequences for economic development.

One common social structure among ethnic groups in sub-Saharan Africa is segmentary lineage organisation. Segmentary lineage societies are characterised by the foremost importance of kin relationships in determining individuals’ social and political allegiances, as well as their patterns of residence.1 Several anthropologists have posited a direct link between segmentary lineage organisation and violent conflict (especially Evans-Pritchard 1940 and Sahlins 1961, but also Bohannon 1958, Kelly 1985, Lewis 1961, 1989, 1994, Salzman 2007). In particular, they argue that clearly defined allegiances based on genealogy make segmentary lineage societies well designed to mobilise combatants for conflict. To our knowledge, however, this relationship has never been studied systematically or empirically. 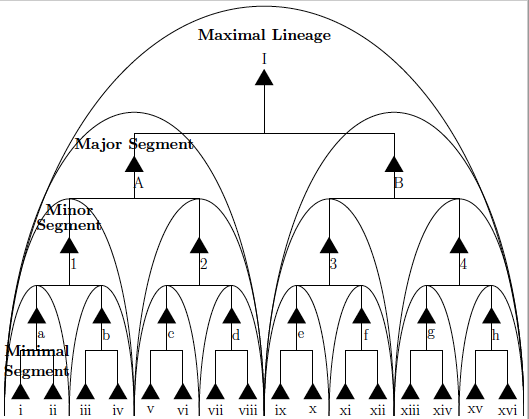 Evans-Pritchard (1940: 142) describes the way that the lineage system leads to conflict among the Nuer (a segmentary lineage society) in South Sudan: “The members of any segment [lineage section] unite for war against adjacent segments of the same order and unite with these adjacent segments against larger sections…Hostility between smaller segments of a tribe may involve the larger segments of which they form part [and] may thus…bring about a fight between secondary, and even primary, tribal sections.” A similar logic has been used by Lewis (1961, 1989, 1994) to explain the scale and duration of civil war in Somalia, which since 1991 has led to between 350,000 and 1 million conflict deaths and the displacement of many more. Ahmed (2013a) argues that Boko Haram mobilises combatants by recruiting from segmentary lineage societies in Nigeria. The mechanism linking segmentary lineage organisation to armed conflict is summarised succinctly by a traditional Bedouin proverb: “I against my brothers; my brothers and I against my cousins; my cousins, my brothers, and I against the world” (e.g. Barth 1973: 13). These case studies suggest that segmentary lineage societies experience more conflict because segmentary lineage organisation escalates and broadens the reach of conflicts once they start.

The study: Is there a link between segmentary lineage and conflict?

We first collected data on the prevalence of segmentary lineage organisation across sub-Saharan Africa. We relied primarily on the Ethnographic Survey of Africa, a series of ethnographic studies edited by anthropologist Daryll Forde and published between the 1940s and 1970s. Our sample consists of 145 societies – 74 of these groups are segmentary lineage societies and 71 are not – that comprise approximately 38% of the population of sub-Saharan Africa (212 million individuals). A map of the sample is displayed in Figure 2. 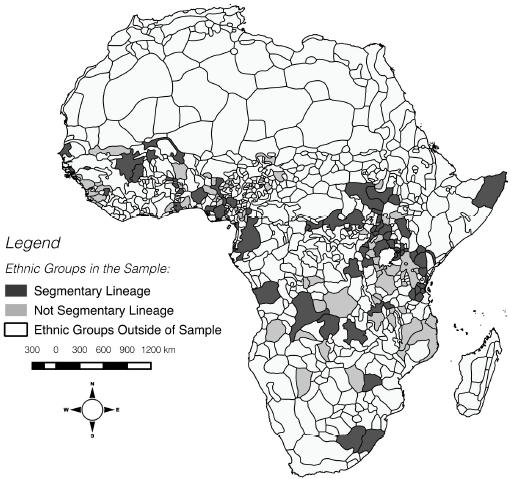 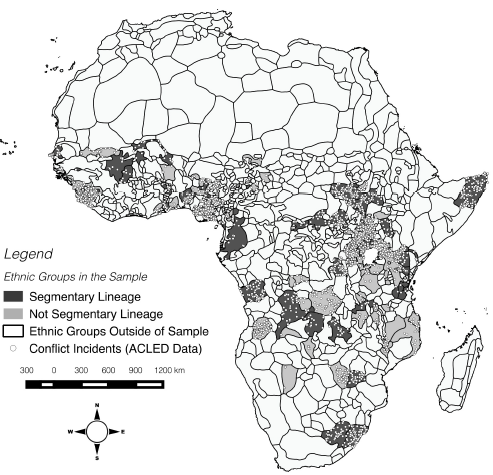 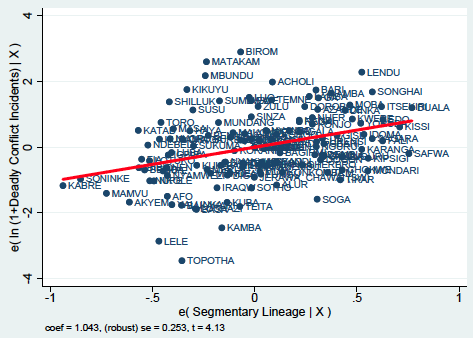 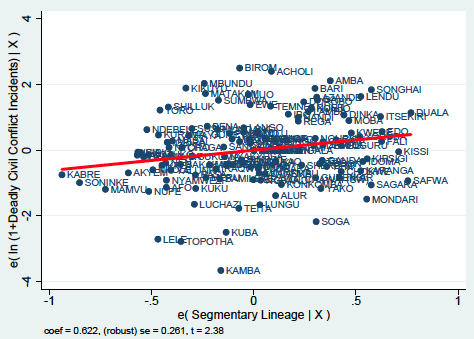 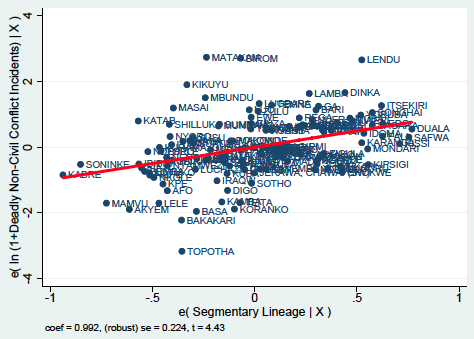 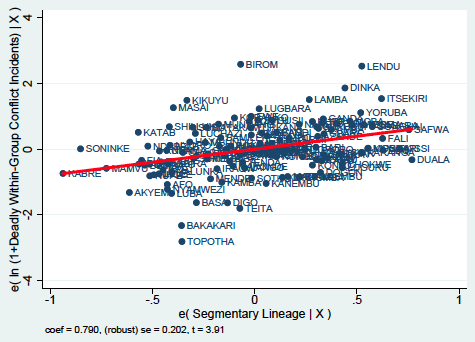 In order to investigate whether this relationship is causal, we undertake a second analysis focusing on conflicts near borders between segmentary lineage and non-segmentary lineage societies. By restricting our analysis to these conflicts, we can control flexibly for any unobservable characteristics that vary smoothly over space. Results from this regression discontinuity strategy are qualitatively very similar to the results from the cross-ethnicity analysis. The number, duration, and scale of armed conflict are all much greater in regions just inside the border of segmentary lineage societies than in regions just outside, even though these regions are likely very similar in terms of geography, historical experience, distance from major cities, and so on.

While our study focuses on Africa, its implications are not limited to the African context. Segmentary lineage organisation is also prevalent in the Middle East, where lineage segments facilitate the recruitment of terrorist combatants. For example, Osama bin Laden and many individuals recruited to Al Qaeda were and are Yemeni, which is a segmentary lineage society (Dresch 1989). In a recent speech, anthropologist Akbar Ahmed (2013b) argues for a link between segmentary lineage organisation and Islamist violence and terrorist recruitment:

Thus, our findings have the potential to explain conflict outside of Africa, including conflicts with major and immediate policy relevance in the US. They raise the possibility that segmentary lineage organisation may be a crucial driver of global conflict.

Ahmed, A (2013a), The Thistle and the Drone: How America’s War on Terror Became a Global War on Tribal Islam, Washington, DC: Brookings Institution Press.

Ahmed, A (2013b), “Muslim tribes and the War on Terror”, Speech transcript, Chatham House, London.

Lewis, I M (1994), Blood and Bone: The Call of Kinship in Somali Society, Trenton: The Red Sea Press.

[1] The formal definition of segmentary lineage organisation consists of three components: (1) individuals trace their ancestry through either their maternal or their paternal line (but not both) and as a result, each individual has a one-dimensional measure of her relatedness to every other member of the ethnic group; (2) larger lineages have sub-sets (segments) which form the main social, political, and administrative units; and (3) lineages and genealogical relationships influence one’s location of residence (Middleton and Tait 1958).