A new poverty measure reveals that in the past 25 years, global poverty has declined but relative poverty has increased in developing countries

Underlying any poverty measure is a concept of individual welfare – how we decide whether one household is better off than another. Existing poverty measures tend to opt for one of two very different assumptions about what matters to people’s welfare. These either assume that people do not care about relative income (this applies to widely used absolute measures, found in most developing countries and the US; see Chetty et al. 2017), or that people only care about relative income (this applies to the poverty measures favoured by Eurostat and the OECD, in which the poverty line is set at a constant proportion of the mean or median for that country and date). This second approach is also incorporated in the UN’s latest Sustainable Development Goals (SDGs).

Relative incomes and standard of living

Consider what happens when all incomes grow at the same rate (leaving inequality unchanged). Any sensible measure of poverty would surely fall. This is not the case when one sets the poverty line as a constant proportion of the mean or median. This concern can be addressed by what we term ‘weakly relative measures’. These rise with the current mean, but not proportionately.

The study: An updated model of poverty measurement

In a new paper, we propose a set of welfare-consistent poverty measures, and provide new global measures spanning 1990-2013 (Ravallion and Chen 2017).

The new approach departs from past approaches to measuring poverty in three ways:

We recognise the uncertainty about global poverty once one allows for relative comparisons within countries.

We start from the assumption that welfare depends on both ‘own income’ and relative income, defined as the ratio of own income to a country-specific comparison income. This provides a welfare-economic explanation for why we see higher real poverty lines in richer countries. It is this pattern, revealing  how poverty lines vary across countries, which has motivated past efforts in setting international lines for global measurement (following Ravallion et al. 1991, who advocated a measure that came to be called the ‘$1 a day’ international line). We recognise, however, that there is a deep identification problem in using national lines to identify international relative lines, as has been the approach in the literature.

The problem is that the properties of the observed national poverty lines are consistent with two rival hypotheses, with very different implications for deriving international lines. It is one thing to believe that national lines reflect country-specific relative comparisons, but quite another to claim that they reveal the local costs of a globally common level of welfare (even when augmented to allow for measurement error and random idiosyncratic factors). That must be judged a strong assumption. The alternative interpretation is that richer countries adopt more generous reference welfare levels for defining poverty. This can generate higher lines in richer countries even without relative comparisons. Identification of a unique schedule of relative lines from cross-country variation in national lines is thus problematic.

Acknowledging this identification problem leads us to propose empirical bounds on the true, welfare-consistent global poverty measures, so as to span the key parameter of uncertainty. The lower bound is an absolute line, fixed in real terms, while the upper bound is a schedule of weakly relative lines that rise with the country-specific comparison income, consistently with national poverty lines. The welfare-consistent global poverty measure lies between these bounds, depending on how much the latent reference welfare level for defining poverty at the national level rises with the mean.

The second component of this new approach concerns how the comparison income should be set, as required for the upper bound.

We provide a theoretical formulation of the comparison income that encompasses both upward and downward relative comparisons. This provides a new perspective on measuring relative poverty. Instead of the ordinary mean or median, our model points to a distribution-corrected mean, the properties of which depend on whether people tend to look up or down (in terms of incomes) when they assess how they are doing relative to others.

The third contribution of our new paper is to provide new data on national poverty lines and survey-based distributions of consumption or income to implement the above ideas empirically.

For the lower bound, we use the World Bank’s $1.90 a day line in 2011 prices (Ferreira et al. 2016). Our new data on national poverty lines suggest that the rank-weighted mean is the relevant comparison income, with the lowest weight given to the richest. This implies that a Gini-discounted mean is called for in setting our upper bound.

A global measure of poverty

We implement the new measures for the lower and upper bounds on a global basis, including countries at all levels of development. Thus, we provide globally unified measures of poverty, in contrast to past work which has been bifurcated between ‘rich’ and ‘poor’ countries, with two distinct literatures. Our estimates draw on 1,500 household surveys for 150 countries over 1990-2013.

Combining these three contributions, we now have truly global poverty measures, which span countries at all levels of development. There are very few people in the rich world, even in many middle-income countries, who are poor by absolute standards typical of the poorest countries. But those countries still have many people who are poor by the standards of what ‘poverty’ means in their own country. This can no longer be ignored when we talk about ‘global poverty’. 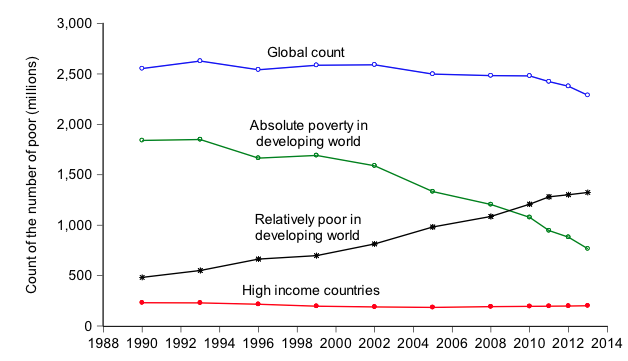 Editor’s note: This column was originally published on VoxEU.org.