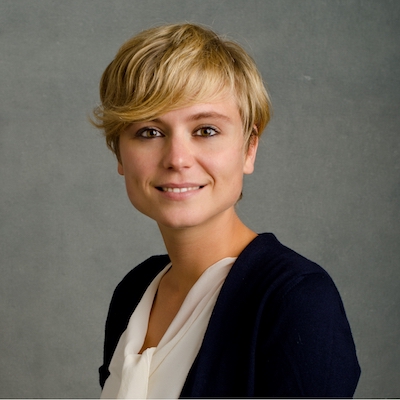 Personnel recruitment is a key challenge for all organisations and we know that financial incentives play an important role in determining who applies for a job (Dal Bó et al. 2013, Ashraf et al. 2017). The theoretical literature indicates that when candidates have imperfect information about a job, financial incentives can convey a signal about broader job attributes (Benabou and Tirole 2003). Paying a person a lot of money to perform a task might signal that the task is hard or unpleasant, or that it has other specific features. If these features are important to workers, then the signal conveyed by financial incentives affects selection.

In Deserranno (2017), I study this ‘signal’ channel of financial incentives in the context of a recruitment campaign for a newly created community health promoter (CHP) position. During the recruitment process of CHPs in rural villages of Uganda, I collaborate with the NGO BRAC to create experimental variation in expected earnings for the position. I use this to estimate the effect of financial incentives on: (1) the candidates’ perception of the job, (2) the size and composition of the applicant pool, and (3) the performance of the organisation.

We can think of the CHP position as consisting of two components:

Because both the NGO and the position were previously non-existent in the villages, candidates were unable to precisely know ex-ante the relative importance of the two components, the social output of the job, the intentions of the NGO, and so on. This context is thus ideal to illustrate whether financial incentives affect the perceived importance of these two components among potential job applicants.

A second feature of my setting is the variation in earnings among workers (they earn a profit margin for each product they sell but receive no base payment). Consequently, the NGO does not know ex-ante how much each candidate would earn if recruited. This feature allows me to manipulate agent expected earnings by advertising the CHP position as high-, medium- or low-paying. This is done by revealing different points of the true earning distribution of existing CHPs (the maximum, the average or the minimum of the distribution). Although the effect of the treatments on expected earnings is theoretically ambiguous, I find that the higher the point of the earning distribution revealed, the higher the expected earnings are. Theories such as salience may explain these results. I use these treatments as a tool to create exogenous variation in earning expectations.

Do financial incentives affect the candidates’ perception of a job?

In 231 rural communities (in which BRAC was expanding its health programme), the CHP position was advertised as high-, medium- or low-paying to a total of 3,500 respondents who were then asked questions about their perception of the job. The results indicate that priming job candidates with higher levels of suggested earnings signals the business-oriented nature of the job, i.e. the position is perceived as one in which a larger proportion of time is dedicated to selling products rather than providing health services. I demonstrate that increasing financial incentives thus decreases the expected social output of the job. Other expectations, like the expected number of working hours or the perceived difficulty of the tasks, are instead unaffected.

Because asking questions about perceptions makes salient specific job aspects and influences agents’ expectations and behaviour, I study the effect of financial incentives on selection in another experiment.  In 315 rural communities (in which BRAC was also expanding its programmes) the position was randomly advertised as high-, medium- or low-paying. In this second experiment, rather than asking questions about perceptions, I collected data on the number and types of agents who applied for the CHP position and those who were then appointed.

I find that raising financial incentives attracts more applicants and increases the probability of filling a vacancy. This, however, comes at the cost of discouraging agents with strong prosocial preferences from applying. This is consistent with the job being perceived as less ‘social’ when financial incentives are stronger.

As pro-socially motivated agents can be appointed only if they apply, the crowding-out effect at the application stage has implications for the composition of the pool of recruited candidates. CHPs hired in the high- and medium-pay treatments are significantly less likely than in the low-pay treatment to have ever worked as a health volunteer and to declare that helping the community is an important feature of a job. When asked to make a voluntary and private donation to a public health NGO (dictator game), they are significantly less likely to donate large amounts (crowding-out of high motivation) while more likely to donate nothing (crowding-in of low motivation). This is represented in panel A of Figure 1.

Do financial incentives affect the performance of an organisation, through selection?

So it’s clear that priming job candidates with higher levels of suggested earnings results in a different pool of potential workers but does this change matter for subsequent performance? I answer this question by collecting monthly data on retention and performance of CHPs over the course of two years and by administering a survey to a random sample of CHPs’ clients.

Figure 1 Distribution of donations to public health NGO, by treatment 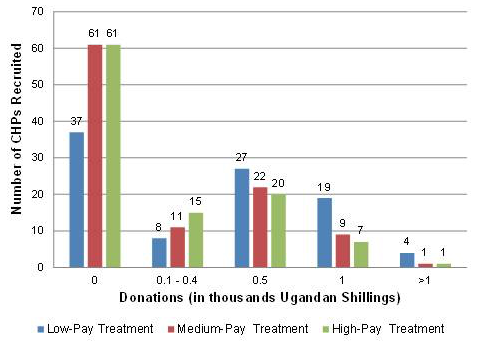 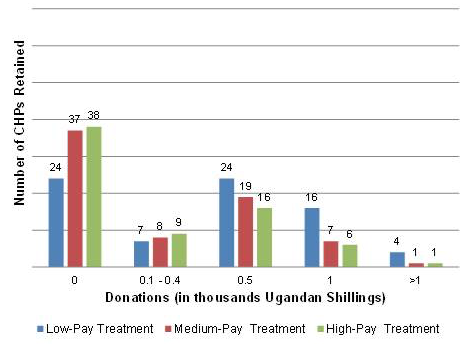 CHPs recruited when the job is advertised as low-paying are also found to perform better – they visit a larger number of households, provide more natal checks, and are more likely to target the most vulnerable households. Finally, households living in their catchment area are more likely to know how to treat diarrhea, one of the most deadly diseases in Uganda, and less likely to have suffered from intestinal worms in the six months before the interview.

While the type and the intensity of the signal conveyed by financial incentives may undoubtedly vary from one context to another (depending on the characteristics of a job), my findings indicate that organisations need to pay careful attention to these potential signals and to the way jobs are advertised. This may indeed strongly affect selection and, through this, their performance. This is especially important for organisations that deliver public services (e.g. governments, non-profits, NGOs, social enterprises, charities) that require workers with strong pro-social motivation.

Editor’s note: This column forms part of a series on financial incentives.