The rising level of atmospheric carbon dioxide (CO2) is a global problem, in terms of both the geographical impact of climate change and how policymakers should think about addressing the problem. Averting a tonne of CO2 emissions has the same climate change benefit wherever in the world it happens. Most government strategies to reduce CO2 emissions focus on policies at home, such as encouraging shifts to electric vehicles and renewable energy sources for electricity generation. However, some of the most cost-effective ways of reducing CO2 emissions could be elsewhere, specifically in low-income countries.

The Stern Review concluded that curbing deforestation in low-income countries, which is where most deforestation occurs today, could be a particularly cost-effective way to address climate change (Stern 2006). Trees absorb CO2 through photosynthesis, and store the carbon in their biomass. When a tree is cut down, it stops absorbing CO2. As it decomposes or is burned, its store of carbon is released into the atmosphere. Deforestation is responsible for about 9% of current human-caused CO2 emissions (Le Quéré et al. 2015).

The study: Payments for ecosystem services in Uganda

In recent work, we provide new evidence on a promising policy approach to reduce deforestation. This involves financial incentives for forest owners to keep their forest intact (Jayachandran et al. 2017). This type of policy is called payments for ecosystem services (PES), where payments are made conditional upon voluntary pro-environment behaviours (Wunder 2007). PES is the environmental version of conditional cash transfers, a policy instrument used widely in developing countries to incentivise families to invest in child health and education.

We implemented a randomised experiment in western Uganda to evaluate PES. The PES programme was implemented in 60 villages, randomly selected from our sample of 121 villages; the other 61 villages served as a comparison group. In villages with the programme, households that owned primary forest were offered annual payments of 70,000 Ugandan shillings (about US$28) per hectare per year if they conserved their forest. The programme extended for two years and was a prototype of what could be a long-running programme.

We measured the impact of the programme on tree cover by analysing high-resolution satellite imagery. The image pixel size was 2.4 meters, which is smaller than the crown of a typical tree. This granularity meant that we could detect not just clear-cutting (deforestation) but also cutting of selective trees within the forest (degradation), which is a major contributor to forest loss in Africa. By comparing forest owners’ land in villages with and without the programme (i.e. treatment and control villages), we assessed how much additional land area remained tree-covered as a result of the programme.

There are two key reasons that PES programmes might not deliver on their promise.

Our experimental design allowed us to evaluate the extent of these two pitfalls and measure the effect of PES, net of their impact.

We found that the PES programme led to a large reduction in deforestation. In our comparison villages, which tell us what happens if no policy is in place, the area covered by trees decreased by about 9% over the study period. In villages with the programme, the rate of tree loss was cut roughly in half (Figure 1). 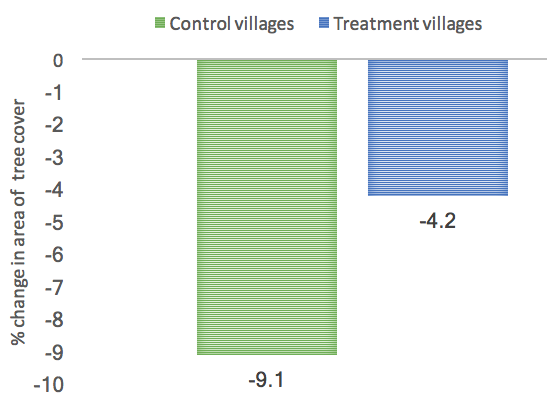 Regarding inframarginality, enrolment and compliance were similar for forest owners who would have conserved anyway and those who would have deforested substantially.

Regarding leakage, we tested whether forest owners shifted tree cutting to:

We find no evidence of these forms of leakage.

We then assessed the programme’s cost-effectiveness by calculating the amount of CO2 emissions delayed by the programme and its monetary value using the ‘social cost of carbon’, which is the estimate of the global harm caused by each additional metric tonne (MT) of CO2 that is emitted. We find that the PES programme benefit is 2.4 times as large as the programme costs. This figure comes from our base case scenario, which assumes that forest owners deforest at a 50% higher rate than the control group after the programme ends, until they catch up on all their postponed deforestation.

An important caveat is that our study design does not allow us to measure people’s responses to the programme outside the study area. For example, charcoal produced in rural Uganda is mostly consumed in urban areas, and if the supply of charcoal contracts, consumers will adjust in ways that have a carbon footprint, even if it is lighter than charcoal use. If charcoal prices rise, for example, people might substitute towards more energy-efficient fuel sources like kerosene.

Available cost-benefit analyses indicate that the PES programme is less expensive per MT of averted CO2 than many policies in the US, such as hybrid and electric car subsidies which cost four to 24 times the CO2 benefits they generate (Knittel 2012, Gayer and Parker 2013). While our cost-benefit analysis focuses on CO2 benefits, forest conservation also has other benefits for Uganda such as preserving the habitat of chimpanzees, an endangered species, and reducing soil erosion.

The experiment also brought to light some limitations of PES that should be addressed in future programmes. PES programmes, if funded by rich countries, constitute a wealth transfer from taxpayers in high-income countries to forest owners in developing countries, who are typically much poorer than them. However, within their communities, forest owners are better off than the very poorest people who do not own forest and are not eligible for the programme. We found that the programme led forest owners to curtail their neighbours’ access to their land to gather firewood. A do-no-harm version of PES might want to include small cash transfers to poor, non-forest-owning individuals in the community.

Under the Paris Agreement most countries have set aggressive targets to limit their CO2 emissions. Achieving these targets will require a suite of policies. Fossil fuel combustion accounts for the majority of emissions, so no doubt policies that reduce dependence on fossil fuel use will be important. In addition, there are many local benefits of policies whose first objective is to mitigate climate change, such as reduced particulate matter from low-emission vehicles.

Thus, most governments should be continuing to pursue and improve their current domestic policies. Our findings suggest that a smart addition to their climate change strategies would be to fund projects in low-income countries that reward people for conserving forests.