The effect of pollution on worker productivity: Evidence from call-centre workers in China

High levels of pollution reduce the productivity even of indoor workers; cutting pollution can improve the health of both the economy and of society

When it comes to pollution, there’s one thing we know for sure – it’s bad for our health. When there’s more pollution, more people end up in hospital (Lleras-Muney 2010), birth weights go down (Currie et al. 2009) and mortality rates rise (Currie and Neidell 2005).

All of this prior research has demonstrated the severe effects of pollution – rises in hospitalisations, mortality, and morbidity on high-pollution days. It is mostly vulnerable groups that drive those findings – the very young, the very old, and those suffering certain medical conditions are especially sensitive to pollution. For instance, asthmatics are more likely to suffer asthma attacks when ozone levels rise, and the immune-compromised may end up in the hospital when exposed to higher levels of pollution.

But what if everyone is affected by pollution, and the effects are just milder for the general population? Less-severe effects of pollution would be hard to measure; one could not simply look at records of hospital discharges or mortality rates. But, like the proverbial iceberg that lies mostly beneath the surface, such effects could really matter.

A new generation of research in environmental economics has approached this issue, trying to capture the less severe – but potentially more widespread – effects of pollution.

In a new paper, we found a unique setting where we could measure these more subtle effects of pollution (Chang et al. 2016). We decided to test how pollution affects workers’ productivity, because of its important impact on an economy’s wealth and because it is a useful way to capture the more subtle effects of pollution. Pollution can cause headaches and fatigue, and it can impair cognitive ability, all of which affects one’s performance at work. We hypothesised that we could capture those health effects by examining productivity.

To test how pollution affects productivity, we focused on two Chinese call centres, one in Shanghai and one in Nantong. Call centres are a useful setting to study pollution for several reasons. First, China has some of the most polluted cities in the world, and ironically much of this pollution has been tolerated in the pursuit of economic growth. Second, call-centre workers are closely monitored by their employers. At Ctrip, the firm we studied, each worker’s daily number of calls is closely tracked and workers receive bonuses for handling more calls per day.

Third, and most importantly, we studied Ctrip workers because we wanted to focus on indoor, white-collar workers. Prior research has shown that pollution affects the productivity of workers performing physically demanding tasks in agriculture and manufacturing (Chang et al. 2014). If pollution affects indoor workers engaged in sedentary and more cognitive tasks, then it almost certainly affects us all. Particulate matter, the pollutant on which we focused, can easily penetrate buildings. Toxicologists have long shown that particulate matter is bad for people’s health. But, to our knowledge, no study before ours has shown that particulate matter outdoors has an effect on indoor, white-collar workers. 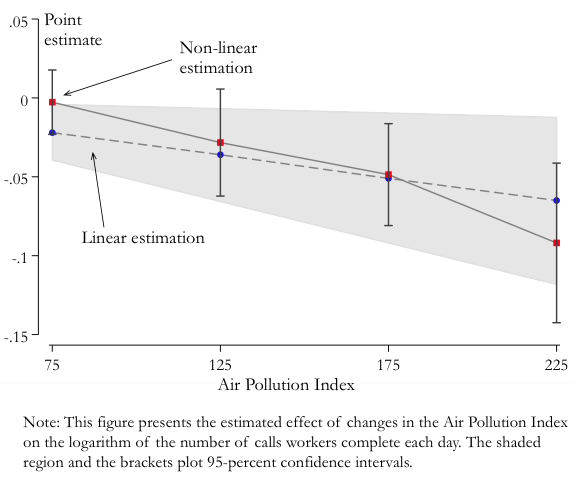 Importantly, if the effects we document for Ctrip workers are similar to those of white-collar workers around the world, then the effects of pollution on productivity could be enormous. A back-of-the-envelope calculation based on our results suggests that even a modest 10-unit reduction in national API levels would increase the monetised value of office worker productivity in China by $2.2 billion per year.

And the results may apply to wealthier countries, too. We find statistically significant effects of pollution on productivity for relatively low levels of pollution, when the API exceeds the US Environmental Protection Agency standard of 100. In 2014, Los Angeles experienced 90 such days, and our results imply that the service-sector productivity in Los Angeles would have been $374 million larger had pollution levels met regulatory standards on those days.

We spent a great deal of time probing the validity of the results. We verified that the productivity of call-centre workers in each city was hurt by pollution in that city – pollution in other cities, sensibly, had no effect. We added controls for temperature to make sure that pollution was the key force driving our results. And, importantly, we tested whether pollution led to workers staying home or showing up to work late. That did not appear to be the case – on heavily polluted days, we saw fewer calls but similar hours worked. Ultimately, all of the results suggest that the productivity of call-centre workers is hurt by pollution.

Our paper is part of a new literature that demonstrates the effects of pollution that have previously been unmeasured. The EPA is paying attention to this literature as it grows. Potentially, these results can tilt the cost-benefit analysis regarding how much pollution governments ought to permit. It also helps to recast political discussions of environmental regulation as simply a tax on the business community – instead, reducing pollution may improve the financial bottom line.

Lleras-Muney, A (2010), “The Needs of the Army: Using Compulsory Relocation in the Military to Estimate the Effect of Air Pollutants on Children’s Health”, Journal of Human Resources, 45 (3), 549-590