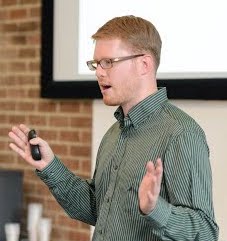 Child stunting was eradicated in developed countries during the 19th and 20th centuries. These cases yield lessons for combating stunting today.

Child malnutrition is one of the most pressing and persistent global health challenges in the world today. The leading indicator of child malnutrition is the stunting rate, which is the percentage of children under the age of 5 who are short for their age relative to modern growth standards. While there has been a reduction in child stunting rates from 40% in 1990 to 23% in 2016, 155 million children worldwide still suffer from stunted growth, mostly in Africa, South Asia, and Southeast Asia (see Figure 1). Reducing child stunting is therefore a target under the Sustainable Development Goals. Stunting matters not only because it causes the children experiencing it misery, but also because it has long-run consequences for these children later in their life. Stunted children have worse outcomes across a range of indicators: they perform poorly on cognitive tests, receive fewer years of schooling, have lower incomes as adults, and are more likely to live in poverty (Hoddinott et al. 2013). Reducing stunting can increase the capabilities and welfare of a population many years into the future.

Figure 1 Map of stunting prevalence around the world in 2015 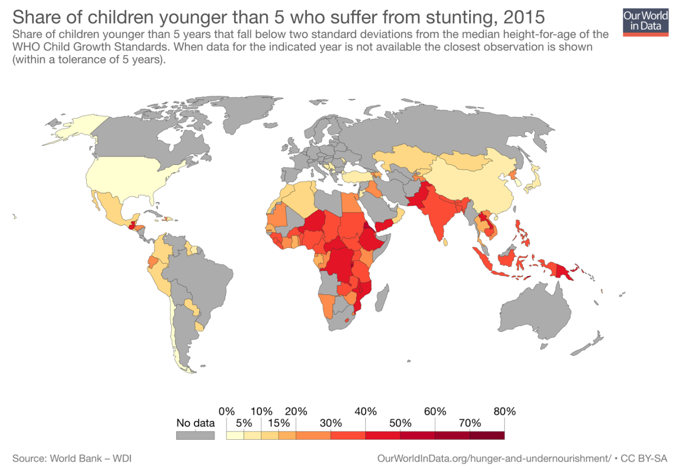 The causes of child stunting are multidimensional, ranging from inadequate nutrition to repeated disease insults. A poor diet lacking in calories, protein or other micronutrients at early ages clearly matters. Mounting evidence also suggests that sources of animal protein in the diet may be particularly important in preventing children from growing too slowly (Headey et al. 2017). Hygiene practices and sanitation infrastructure are also important, especially access to piped water in the home, hand washing and access to toilet facilities (Nabwhera et al. 2017). Spears et al. (2013) and Lin et al. (2013) find that the prevalence of open defecation strongly influences stunting by exposing children to pathogens that lead to chronic diarrhoea and malabsorption of the nutrients they consume.

In September 2017, academics from a broad range of disciplines, policy experts and influencers in the third sector, and international organisations met at the LSE to discuss the current state of stunting research and policy at a conference entitled ‘Stunting: Past, Present, Future’ (Schneider 2018). Importantly, many economic historians attended the conference providing a long-run perspective on child stunting. This column highlights a few key lessons for stunting research that come from taking a long-run, historical view on the issue.

Figure 2 Stunting rates around the world through the 20th century 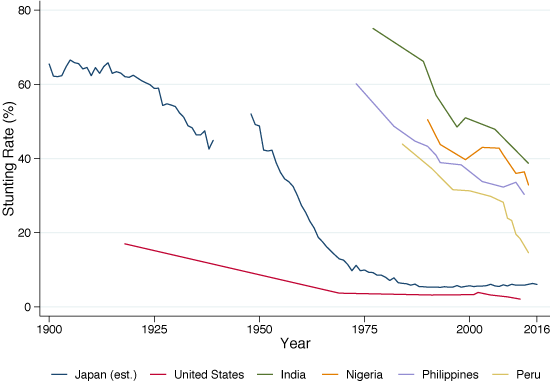 Clearly, understanding the history of child stunting reveals a number of useful lessons that can help combat stunting today. Eradicating stunting is a long-run process linked to changes in child growth and adult stature. It can take decades even in favourable economic and health conditions and seems to be driven by reductions in child morbidity and improvements in nutrition quality.

Baten, J and M Blum (2014), “Why are you tall while others are short? Agricultural production and other proximate determinants of global heights”, European Review of Economic History 18(2), 144–165.

Schneider, E B (2017), “Children's growth in an adaptive framework: Explaining the growth patterns of American slaves and other historical populations”, The Economic History Review 70(1), 3–29..