All governments must maintain social stability to stay in power, and threats to stability can come in many forms. A rich literature documents how economic factors such as low income levels (Collier and Hoeffler 1998, 2004, Fearon and Laitin 2003, Hegre and Sambanis 2006) and negative labour income shocks (Miguel et al. 2004, Dube and Vargas 2013, Bazzi and Blattman 2014) are strong drivers of unrest. Demographic factors contribute to instability as well, including male-skewed sex ratios (Edlund et al. 2013), youth-skewed age profiles (Urdal 2004), and ethnic polarisation (Montalvo and Reynal-Querol 2005).

Strategic governments can try to counterbalance these forces through policy – indeed, they have a menu of options. Some examples include redistribution and social insurance. Recent work by Fetzer (2014) documents how workfare programmes, like India’s National Rural Employment Generation Scheme (NREGS), have a pacifying influence on ongoing conflicts. Autocrats have additional, illiberal, tools available to them, including information manipulation (Gehlbach et al. 2016, Shadmehr and Bernhardt 2015, Guriev and Treisman 2015) and repression of civilians (Gregory et al. 2011). However, there remains relatively little empirical evidence documenting how governments, especially autocracies, leverage policy to protect stability.

The political economy of state employment and instability

In a recent paper (Wen 2020), I provide novel, empirical evidence that autocrats use state employment to mitigate destabilising shocks. In particular, I argue that the largest autocracy in the world – China – uses state-owned enterprise (SOE) employment to maintain stability.

China is an ideal context in which to study these dynamics. SOEs remain a large force in the economy. Since 2006, they have employed about one-fifth of the labour force, about 70 million people, comparable to the entire population of France. Additionally, the Chinese government considers stability a goal of paramount importance and retains the de jure and de facto ability to influence SOE employment.

SOEs are 20-50% less productive than their private counterparts and depress the aggregate productivity of the Chinese economy (Song et al. 2011, Dong and Putterman 2003, Jefferson et al. 2000). At the same time, a key policy priority of China over the last half-century has been economic growth.

On the surface, it would seem that SOE reform and the government's stated goal of economic growth appear perfectly aligned. Although SOE employment decreased markedly for a few years following the reforms of the late 1990s, it has remained steady since 2006. One way to explain why SOEs have proved so persistent in the face of international and domestic calls for reform is that they serve a central government objective - protecting stability.

In my paper, I uncover some additional facts consistent with a stability role for SOEs. First, they employ a higher proportion of men and male minorities than private firms, even conditioning on observable worker characteristics like education, age, and industry of employment. In this context, men and male minorities are much more likely to participate in destabilising behaviours than other demographics. 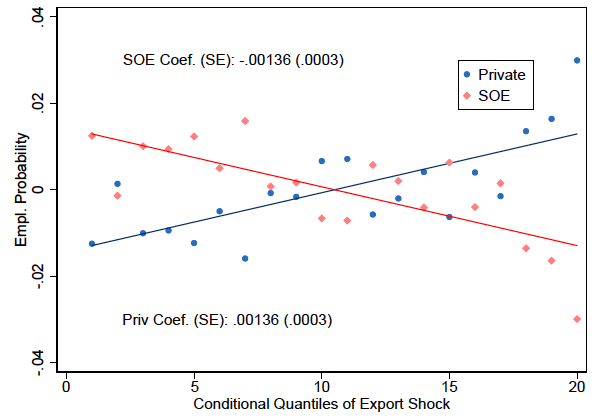 Figure 2 The demographics of political prisoners versus general population 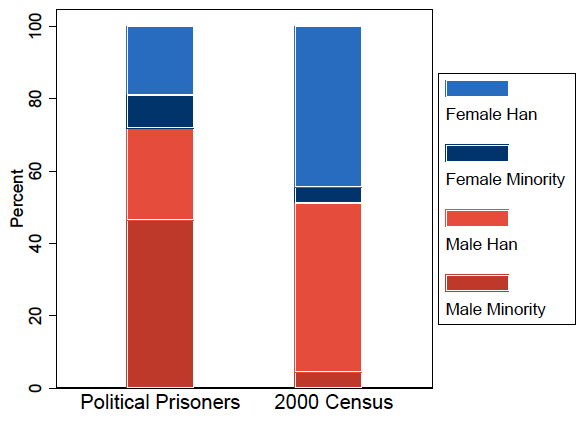 Motivated by these facts, I develop a theory of SOE stabilisation, which generates three key predictions. First, when society is subject to a shock that increases the threat of unrest, the model predicts that SOEs should differentially hire more unrest-prone workers. Second, private firms should hire fewer of that same group. Finally, the wages of the unrest-prone workers should increase, a consequence of the fact that the increase in SOE demand for their labour outweighs all other wage forces.

Testing the theory: Unrest in Xinjiang and state employment

I test these predictions using China’s Urban Household Survey (UHS), 2002-2009, in combination with an original dataset of conflict events that draws on news and archival sources. However, isolating the causal effect of unrest on SOE employment is complicated by reverse causality and omitted variables. Employment may directly affect unrest, or some unobserved factor may alter both simultaneously.

To disentangle the complex web of cause and effect, I implement a triple differences strategy. This strategy uses variation in the intensity of an ongoing ethnic conflict in Xinjiang, China’s westernmost province. There, members of the Uyghur Muslim ethnic minority have been fighting for independence. Over 85% of participants in the conflict are male minorities (CECC 2019).

I construct a measure of the degree to which conflict in Xinjiang spills over and generates threats of unrest for counties in other Chinese provinces. This measure is high in years preceded by many Xinjiang unrest incidents, and high in non-Xinjiang counties with large Uyghur population shares. I omit Xinjiang from the analysis sample because local conflict intensity and the local labour market are likely influenced by each other and common unobservable factors.

These changes across counties and over years constitute the first two differences of my approach. The third difference is the comparison between male minorities and everyone else. This comparison is essential for addressing the plethora of ownership-specific reforms, fiscal programmes, trade agreements, and other omitted variables that may covary with the county-year unrest shock, and employment outcomes. As long as these forces affect male minorities and the general population equally, I can interpret the differential response of male minorities as causal.

The employment behaviour of SOEs suggests that the Chinese government implicitly subsidises male minority employment by 26%. This value is large but not unprecedented relative to targeted wage subsidies in other contexts. In the mid-2000s, Hungary implemented payroll tax subsidies for the hiring of the long-term unemployed that varied from 15-25% of wages (Cseres-Gergely et al. 2015). In 2006, Finland implemented a subsidy for payroll taxes older, low-wage workers that represented approximately 16% of their gross income (Huttunen et al. 2013).

Overall, my work suggests that state employment is not simply a matter of business – it is an expression of the government’s desire to maintain social stability and stay in power.