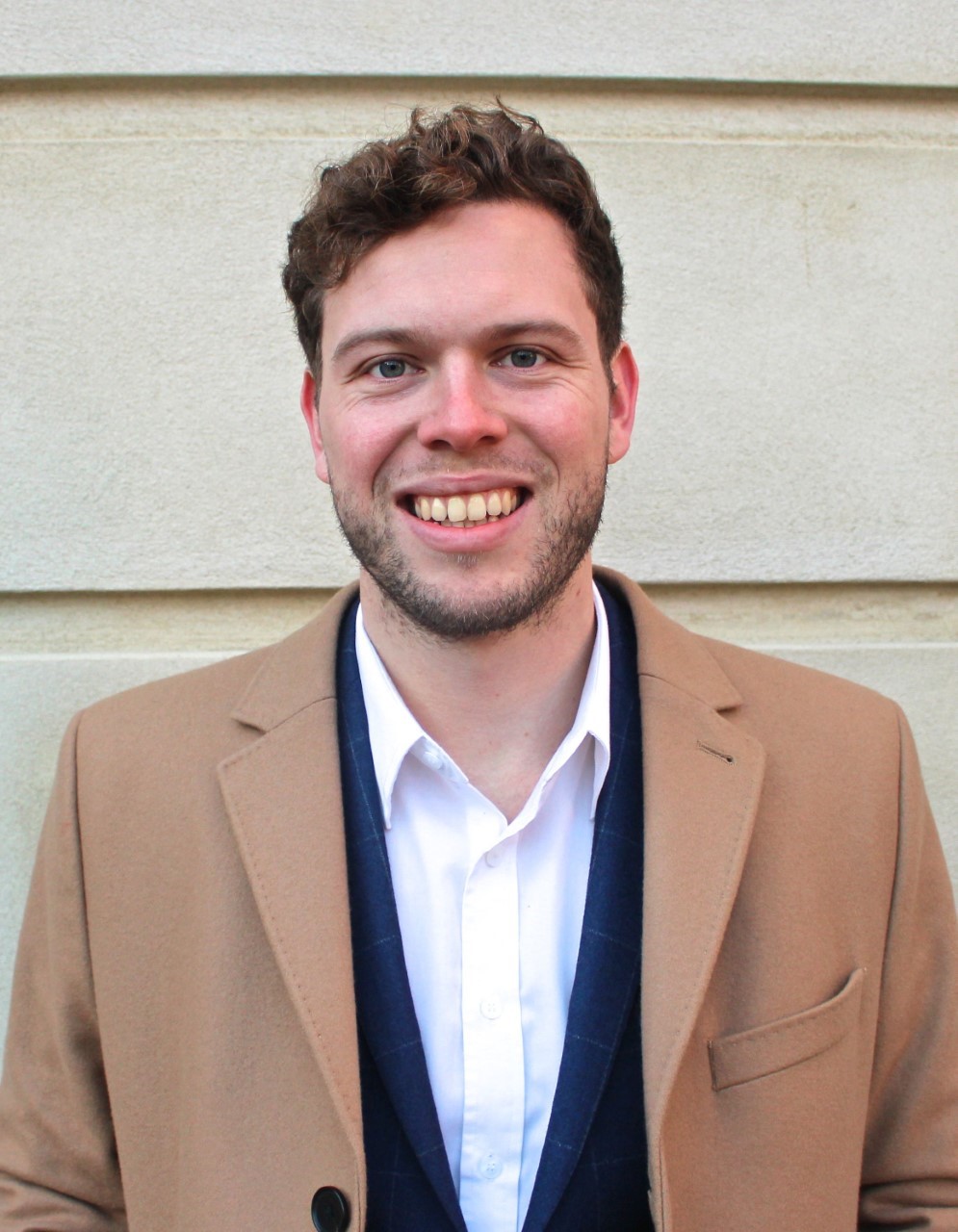 Corporate taxation is at the heart of economic development, and cardiac failure looms if international tax reform is not made globally inclusive

There is a close link between a country’s economic development and its capacity to collect tax revenue. Tax administrations in developing countries often face a shortage of resources and a large informal sector that limits the possibility of enforcing a broad tax base. Within this context, the taxation of large formal firms has traditionally been of major importance. By focusing their efforts on a few sizable taxpayers, a developing country’s tax authority is able to collect substantial tax revenue with few audit costs.1

However, this source of revenue is now at risk. Across the world, multinational enterprises (MNEs) are shifting their earnings from affiliates in high-tax countries to those in low-tax ones (a phenomenon known as ‘profit shifting’). This behaviour is well documented in high-income countries, but state-of-the-art econometric evidence is till date largely absent in developing countries.

Despite the lack of empirical evidence, leading international organisations have collectively expressed concern that profit shifting disproportionally affects developing countries and that the failure to tackle this issue will jeopardise achieving the Sustainable Development Goals.2 In their G20-mandated report, the OECD concluded that ‘developing countries face difficulties in building the capacity needed to implement highly complex rules and to challenge well-advised and experienced MNEs’ (OECD 2014: 4). There is further criticism that the G20 and OECD-led reforms of international tax practises are not benefitting poorer countries (Ocampo 2019).

In a collaboration between the United Nations University – World Institute for Development Economics Research (UNU-WIDER) and the National Treasury in South Africa, we were granted access to the universe of anonymised corporate tax returns and cross-border transactions in South Africa. Examining the patterns in these data sets enabled us to learn new facts about the taxation of multinational firms.

One important channel of profit shifting is transfer mispricing. That is, firms can reduce their tax bill by placing a high price on items flowing from affiliates in low-tax countries to affiliates in high-tax countries, and vice versa. This erodes the profits in the high-tax affiliate, which is paying the high price, but equally increases the profits in the low-tax affiliate, which is receiving the high price. Legally, firms are supposed to use ‘arm’s-length pricing’ when transacting internally – firms should set prices internally ‘as if’ they were trading with an external party. However, firms may choose to deviate from arm’s-length pricing in the absence of frequent audits.

In a recently published paper, I examined transfer mispricing in South Africa using transactional data (Wier 2020). To do so, I obtained a newly constructed, confidential, administrative-level customs dataset covering all imports of goods to South Africa in the period between 2011 and 2015. The data are disaggregated at the country-firm-relationship-product-year level, which allowed the precise estimation of the arm’s-length price of each transaction. The unit price on related (intra-firm) transactions was compared to the estimated arm’s-length price. My findings indicate that the estimated deviation from arm’s-length pricing systematically moves in accordance with the tax incentives to manipulate transfer prices. Across all specifications, the evidence indicates that related imports from low-tax countries are overpriced by at least 8% compared to the estimated arm’s-length price.

In an earlier paper, Hayley Reynolds and I examined the composition of firms shifting profits (Wier and Reynolds 2018). We found that the majority of firms in South Africa do not shift any income to tax havens, which is good news for tax collection. On the contrary, we found that the largest multinational firms in South Africa shift as much as 80% of their income to tax havens. Because large firms constitute the bulk of the total corporate tax base, the ultimate tax loss is a sizable share of total tax receipts, which isn’t good news for tax collection.

We found that 10% of multinational firms account for 98% of the tax loss to tax havens. This calculation, of course, neglects the 1.2 million purely domestic firms operating in South Africa, in which case a meagre 0.02% of all firms cause 98% of the tax loss.

The stark inequality of profit shifting is a problem for economic development. When a few firms receive a de facto tax benefit, while most do not, it creates a competitive distortion. In particular, large multinational firms will be able to outperform smaller firms in their after-tax financial results, which in turn allows them to absorb market share from smaller firms. As larger firms (that use tax havens) obtain larger market share (from firms that do not), the corporate tax base will further erode. 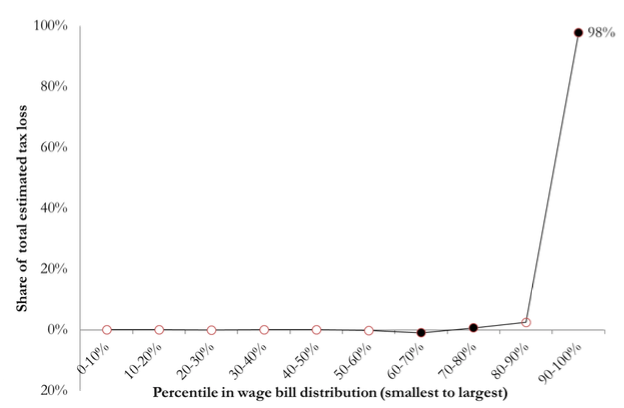 There might be a very cost-effective way to curb transfer mispricing of goods. Tax authorities around the world find themselves in a situation where information is in abundance but not efficiently exploited. When a firm prices a product differently in related and unrelated transactions, it must lead to an automatic audit? Or, as a minimum, a flag gets raised and an email sent to the firm cautioning them to stop this behaviour? The short answer is no. To the best of our knowledge, no tax authority has set up an automated flagging system that tests for deviations in the pricing of related and unrelated transactions. This seems to be low-hanging fruit for tax authorities globally to pursue. In many cases, the data is already there, stored in a raw format on a server which is used in the calculation of import statistics.

It took two weeks to set up the data in South Africa such that it could automatically flag companies with systematic deviations from estimated arm’s-length pricing.3 The costs of doing this is in the thousands of dollars, while the potential tax gain is in the tens of millions of dollars.

What would a fair and functional global tax system look like ten years from now?

Is there a likelihood that such a solution will see the light of day? Surprisingly, it is not entirely impossible. OECD Secretariat’s recent proposal indeed suggests a similar (although diluted) solution. The timeline for 137 member countries agreeing on this is the end of 2020. The public pressure has never been higher to fix the corporate tax and a trade war looms if countries fail to collaborate. If a global agreement is reached, it is very conceivable that new and bolder global reforms would be made. In other words, a fair and effective corporate tax system is in no way out of reach.

2 This widespread agreement has led to the establishment of the “Platform for Collaboration on Tax” – a joint effort by the World Bank, IMF, OECD and UN to assist developing countries in curbing profit shifting.

3 Friedrich Kreuser also deserves credit for the entire process of obtaining the data from SARS.