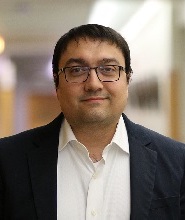 Senior Economist in the Trade and International Integration Unit of the Development Research Group, World Bank

Robotisation can catalyse trade and improve welfare, but policies are required to ensure automation-induced growth is inclusive

Modern industrial robots can perform a variety of repetitive tasks with consistent precision and are increasingly used in a wide range of industries and applications. Global sales of industrial robots reached a new record of 387,000 units last year (IFR 2018) and robot adoption is projected to grow steadfastly. The accelerating automation of production has stoked fears that large swaths of the workforce, especially the unskilled, may suffer wage and job losses (Bloom et al. 2018).

These fears are in part predicated on the experience of OECD countries, where robot adoption has contributed to productivity growth at the expense of the employment share of low-skilled workers (Acemoglu and Restrepo 2017, Graetz and Michaels 2018). Recent estimates suggest that around 14% of jobs across the OECD area are at risk of disappearing because of automation, while another 32% are likely to see significant changes (OECD 2018).

But it’s not only workers in rich countries that are potentially at risk. Those in developing countries could also be in peril. Robotisation might reduce the scope for North-South trade and incentivise production closer to home, thus undermining the prospects for export-led development (Hallward-Driemeier and Nayyar 2018).

Developing countries are arguably especially exposed to automation-induced trade declines, since globalisation has been associated with the offshoring of repetitive and labour-intensive tasks to low wage countries (Das 2018, Mittali and Das 2018). Moreover, developing countries may not have the requisite skills and infrastructure to meaningfully participate in future global value chains, as automation diminishes the importance of low labour costs as a determinant of competitiveness (Rodrik 2018).

The study: The impact of robatisation on the South

In our recent research (Artuc et al. 2018) we show that, at least for now and for the foreseeable future, these fears about Northern automation hurting Southern workers are vastly overblown. On the contrary, Northern robotisation promotes North-South trade and is likely to benefit workers and consumers in developing countries.

We start by assessing what drives robot adoption (Figure 1). Potential cost savings seem to be an important determinant since richer countries, where both wages and the opportunity cost of labour are higher, tend to adopt more robots (Panel a). In addition, the technological feasibility of automation (as measured by the share of jobs that could be performed by robots) is an important driver of robot use across different industries (Panel b).

a) Robot adoption is associated with the (opportunity) cost of labour 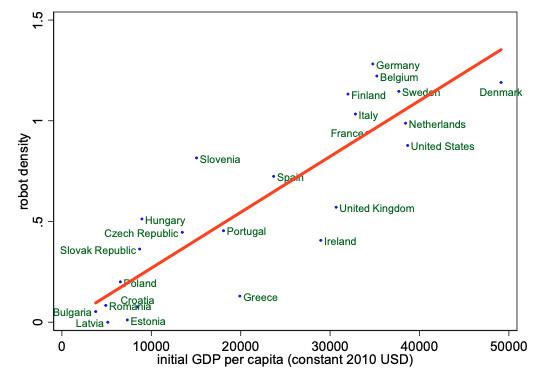 b) Sectors in which automation is feasible adopt more robots 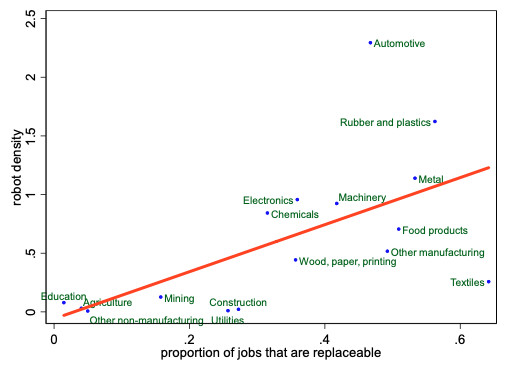 We then document the impact automation has had on bilateral industry-level North-South trade over the past two decades. Using an instrumental variable strategy that exploits variation in exposure to robots across countries and sectors, we find that a 10% increase in robot density in an automating industry in the North boosts its exports to the South by 11.8%. Surprisingly, it also induces a 6.1% increase in its imports from the South.

Explaining the benefits of robotisation

What explains these patterns? To answer this question, we develop a trade model featuring two-stage production and trade in both intermediate and final goods in which some – but not all – tasks can potentially be automated in some sectors. The increased exports from the North are easily explained by robot-induced reductions in production costs.

The more striking growth in imports from the South reflects the sum of two competing forces:

Over the past 20 years, the latter production expansion effect seems to have dominated. Indeed, our empirical results reveal that the robot-induced surge in Northern imports from the South is concentrated in intermediate inputs such as parts and components. 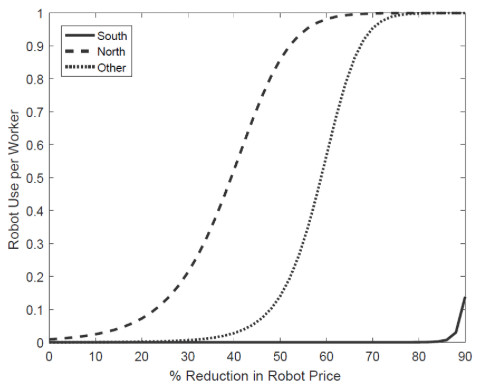 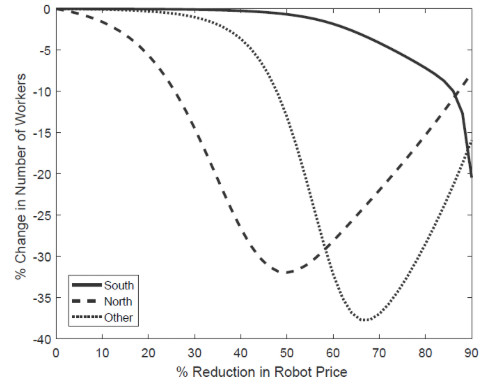 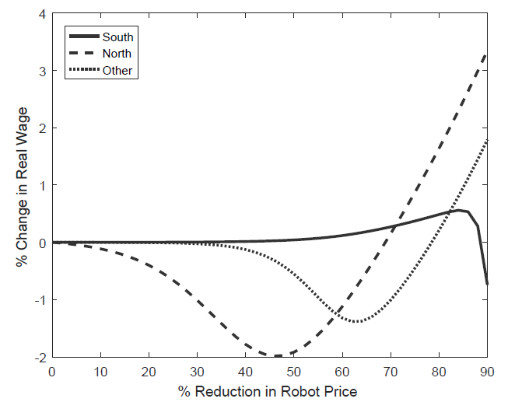 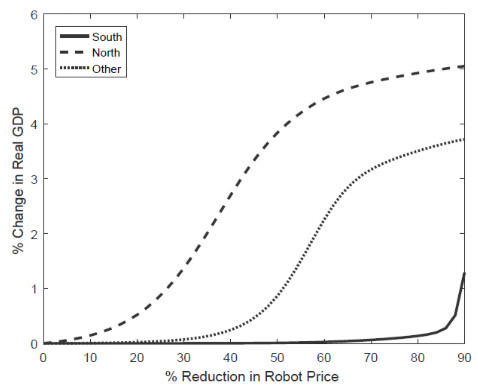 In summary, industrial robots will most likely catalyse, rather than reduce, North-South trade and enhance global welfare. This conclusion is likely to be reinforced by the fact that other new technologies – such as high-speed internet, blockchain, and digital platforms – will reduce even further the costs of trading and coordinating across borders (Freund and Weinhold 2002, 2004, Brynjolfsson, Hui and Liu 2018); and can lead to the creation of new products and tasks (Acemoglu and Restrepo 2018, Nakamura and Zeira 2018).

At the same time, trade and technological change will necessitate labour market adjustment and may create severe distributional tensions. Designing policies that harness the growth potential of globalisation and technological progress whilst ensuring the attendant gains are equitably spread is, therefore, an important task for future human research.