The impact of fertiliser management training: Evidence from Bangladesh 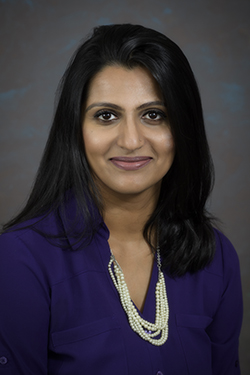 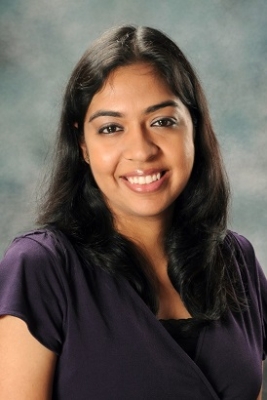 Several countries, including Bangladesh, have used fertiliser subsidies to induce their adoption and stimulate agricultural output (Huang et al. 2017).1 The economics literature (e.g. Duflo et al. 2011) suggests that, in theory, heavy subsidies can induce overuse of fertiliser, which is costly to the farmer, the government, and the environment (Rasul and Thapa 2003). Moreover, both the quantity and timing of fertiliser application matters for profitability. Too much fertiliser applied at the wrong time or too little at the right time can result in higher than optimal costs in the former case and lower overall output in the latter. In the era of precision agriculture, effective management of fertiliser has the potential to increase both efficiency and productivity.

Improving fertiliser management might require intensive training of farmers. However, existing literature suggests that rule-of-thumb training can be more effective than a complex training program (Drexler et al. 2014). In our study (Islam and Beg 2021), we investigate whether farmers can use a simple tool and rule-of-thumb instructions to guide fertiliser application.

Fertiliser use in Bangladesh and specific properties of urea

Urea provides nitrogen that is vital for plant growth and is used almost universally by rice farmers in Bangladesh (Jahiruddin et al. 2009). Some specific properties of urea require farmers to understand the precise nitrogen needs of plants throughout the season. Urea is volatile and not continuously retained by the soil. It thus needs to be applied several times during a season when plants' demand for nitrogen is high (Choudhury and Kennedy 2004, 2005, Koenig et al. 2007). Excess urea or urea applied at the wrong time would not be absorbed by the plant and would have little to no effect on yields, while increasing farmers' costs. Unabsorbed urea can also leach from soil to surface or ground water, causing negative environmental effects (Gilbert et al. 2006, Eggelston et al. 2006).2 Failure to supply adequate urea at the right time would deprive crops of nitrogen and reduce yield.3 Thus, better fertiliser management through optimal quantity and timing of application can minimise wastage, lowering the direct fertiliser expense and associated environmental costs, and can also improve productivity by ensuring nitrogen is available when it is most beneficial for plant growth.

Since the absorption of urea is low early in the season, the Bangladesh Department of Agriculture Extension (DAE) recommends the first urea application three weeks after planting. Given the high rate of volatility, the DAE also recommends that urea should be applied three times during the period between 21 days after the planting date and a month before harvest.4 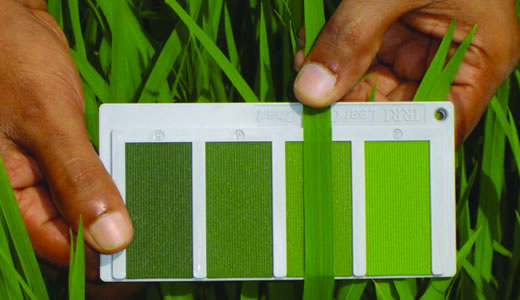 Note: The figure shows a leaf colour chart (LCC) – a plastic, ruler-shaped strip containing four colour panels ranging from yellowish green to dark green. The LCC can be used to determine if the crop has sufficient nitrogen by matching the leaf colour to the chart.

The urea requirements of a crop can be identified by the colour of its leaves. Crops with sufficient nitrogen have dark green leaves, whereas light green leaves indicate a need for urea. Our study uses a leaf colour chart (LCC) – a simple tool that can be used to check whether a crop requires urea. By using an LCC, farmers can accurately identify the nitrogen requirement of crops and time urea applications accordingly (Alam et al. 2005, Witt et al. 2005), thus improving decisions on both quantity and timing.

Through a household-level randomised control trial, the study provided farmers in the treatment group with an LCC along with a basic training on how to use the chart and instructions on when and how much urea to apply.5 During the training sessions, treatment farmers were instructed to begin fertiliser application 21 days after planting, as recommended by the DAE. Farmers were told to compare the colour of the rice crop leaves with the LCC before applying urea, and were encouraged to apply a specified amount of urea only when the LCC indicated that the crop was deficient in nitrogen. The intervention focused on `rule-of-thumb' training that provided very simple rules on when to check leaf colours, when to apply the fertiliser and how much to use at each application. The quantity of urea that the farmers were instructed to use at each application was also guided by DAE recommendations.

Using baseline data before the intervention, we note that on average, farmers applied urea earlier than the recommended time, and urea usage at each application was significantly higher than the recommended amount. The intervention was thus expected to change farmers' urea application practices, particularly by inducing a delay in first urea application and a reduction in the quantity used at each application. Frequency and timing of application after the first time would vary with plot-specific nitrogen needs determined using the LCC.

The study finds that treatment farmers reduce urea usage without compromising yield, suggesting scope for improvement in the management of urea. Treatment farmers are more likely to delay the first application of urea until 21 days after planting instead of applying earlier in the season when returns to urea are low. Treatment farmers also increase the frequency of urea application in the high return period. Examining overall output and urea usage during the season, we find that farmers in the treatment group reduce total urea used by about 8% compared to baseline levels, driven predominantly by a delay in first urea application. We also find that treatment farmers experience a 3-7% increase in yield, though this effect is not always precise. Improved yield could be driven by improved timing, particularly, more frequent application in the high return period. 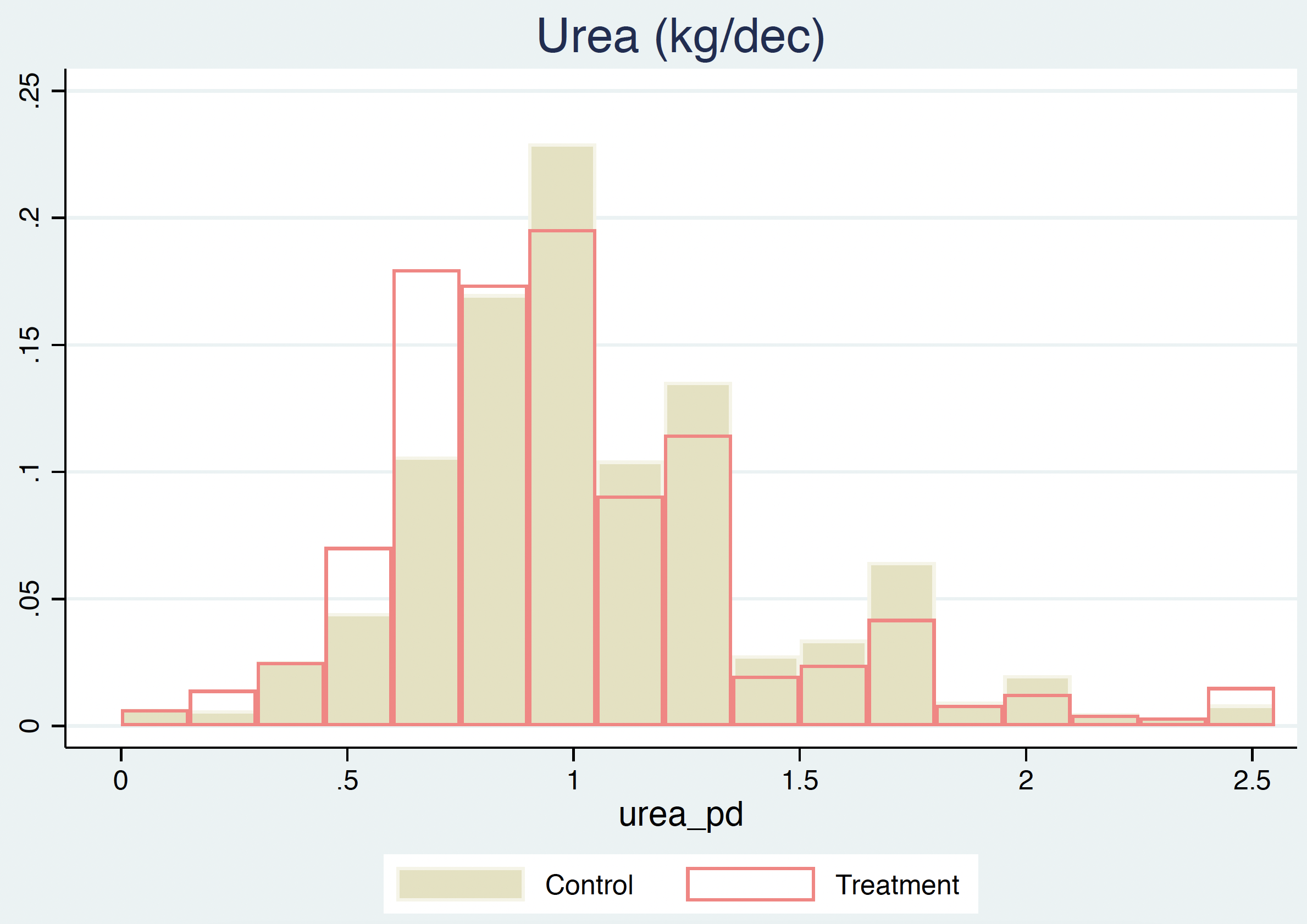 Note: The figure shows the difference in urea usage during the season. Farmers in the treatment group reduce 0.079 kilograms per decimal of total urea used, where 1 acre = 100 decimals.

The findings show that there is scope for improving management of inputs within existing technology and resources, supporting recent research that emphasises the role of management practices in productivity (Bloom et al. 2013). While the study does not address the merits of subsidies directly (Duflo et al. 2011, World Bank 2007), the results indicate that overuse may occur in a context with high fertiliser subsidies. The findings also speak to an expansive literature on the environmental burden and greenhouse emissions due to soil management and fertiliser overuse (Eggelston et al. 2006).

Authors’ note: The views expressed in this column do not necessarily reflect those of Amazon. The fieldwork for this research was conducted prior to Islam joining Amazon.

Choudhury, A T M A and I R Kennedy (2004), “Prospects and potentials for systems of biological nitrogen fixation in sustainable rice production”, Biology and Fertility of Soils 39(4): 219–227.

Choudhury, A T M A and I R Kennedy (2005), “Nitrogen fertilizer losses from rice soils and control of environmental pollution problems”, Communications in Soil Science and Plant Analysis 36(11): 1625–1639.

2 The extent of environmental pollution due to fertilisers, or otherwise, is not well studied or monitored in Bangladesh.

4 The time between 21 days after the planting date and a month before harvest is a high return period for urea as absorption by plants is high. Before and after this period, returns for urea application are low.

5 The intervention was thus a bundle of the LCC tool with the training and guidelines, henceforth referred to as the LCC intervention.