Consumption of water and many energy sources can harm the environment and impose costs on others. The textbook solution is to raise the price such that people internalise the environmental externality. A puzzle in the literature is that residential customers’ water and energy use are quite price insensitive. A number of explanations have been suggested, including the complex pricing structures that utility companies use (Ito 2015), lack of awareness of one’s own use (Jessoe and Rapson 2014), and inattention to prices (Allcott 2011).

In recent work, we propose and investigate another explanation: free-riding within the household (Jack et al. 2018). Individuals enjoy private benefits from consumption but share the costs with other household members. This is because billing is at the household level, and the consumption of each household member is not easily observed. Thus, a free-riding problem ensues, wherein individuals consume more and are less price-sensitive than they would be if they bore the full cost of their actions. The problem is akin to the classic ‘moral hazard in teams’ problem in economics, in which workers put in less effort if they are rewarded for their team’s total output rather than their personal contribution.

To study this free-riding problem, we collaborated with the water utility in Livingstone, Zambia. We obtained water billing records for residential customers, a population that is middle class by Zambian standards, yet spends around 5% of monthly income on their water bill. For comparison, monthly piped water consumption is roughly half that of the average household in the US.

We designed a field experiment to test two main predictions about how price responsiveness varies across individuals and households:

On average, water use fell by 6.2% in response to the conservation prize, which implies a price elasticity of -0.27, similar to results on water demand in other contexts.

Women usually have the weaker status-quo incentive to conserve since men are the ‘effective bill payers’, and so an individual-specific price given to a woman generates an especially large change in her incentive to conserve. Consistent with this, we found that offering the conservation prize to the wife led to a roughly 9% reduction in water use, versus a 4-5% reduction if given to the husband or to both spouses (Figure 1).

Figure 1 Estimated impacts on water use in response to the conservation prize offered to the couple, husband, or wife 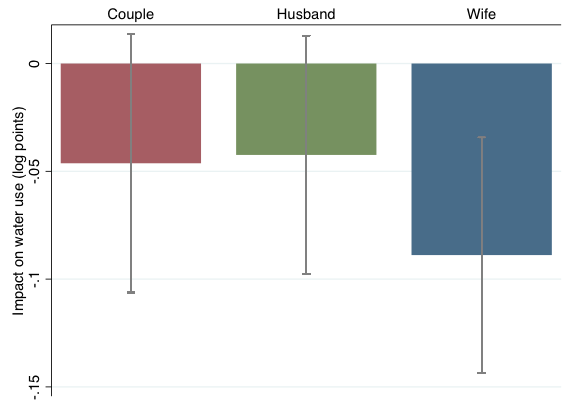 Women are not always the ones with weak incentives to conserve; sometimes the man is the likely free-rider because the woman is the effective bill payer. We tested whether what really matters is the recipient’s gender or his or her existing incentives and found that the answer is incentives. Water use declined most when the prize was given to whoever was not the effective bill payer, controlling for that person’s gender. Thus, how savings from water conservation are divided up within the home is a key determinant of household water use.

We also found that couples who were more altruistic toward each other were more responsive to the conservation prize. Households with above-median sharing in the dictator game were four times as price responsive as those with below-median sharing, implying that altruism among family members affects how households respond to prices. Spouses might also share more with each other in the game if they can recoup what they share. The ability to enforce informal contracts in the home also helps households overcome free-riding in water consumption.

Environmental externalities from water use (for example, harm to the critical ecosystem of the Zambezi River, which is Livingstone’s water source) suggest that a tax is needed to achieve the socially efficient consumption level. The extra inefficiency that our work highlights, in that households consume too much even from their own perspective, implies that the tax needs to be higher. However, a recent insight from behavioural economics is that if households vary in the degree of their internal inefficiency, i.e. if some are better and some are worse at overcoming free-riding, then the optimal tax should be set to only partially solve the inefficiency (Taubinsky and Rees-Jones 2016). Our calculations suggest that the optimal price in our setting is 17% higher because of household free-riding, which leaves water consumption still higher than it would be absent intrahousehold free-riding.

Caveats and directions for future research

Our study focused on the dynamics between husbands and wives, although households include children and other members too. The incentive problems that we have described likely extend to these other relationships, and more work is needed to understand, for example, how parents and children negotiate around water and energy use.

Our study was also not designed to test scalable policy solutions. Person-specific prizes for conservation allowed us to test for the importance of intra-household free-riding, but are not a feasible long-term policy, since water is billed at a household and not individual level.

As discussed above, taxes may be unable to fully address both the environmental externality and the intra-household problem. Addressing intra-household free-riding directly may therefore be valuable. One idea is to provide richer information to households about their usage through smartphone apps or smart meters; real-time data on household-level usage would help in estimating and monitoring each individual’s usage. In addition, technologies that make conservation easier (e.g. water-saving appliances) might be especially valuable when it is difficult to align incentives within the home.

Taubinsky, D and A Rees-Jones (2016), “Attention variation and welfare: theory and evidence from a tax salience experiment”, NBER Working Paper no. 22545.