The impact of anti-poverty programmes on the environment: Evidence from Indonesia 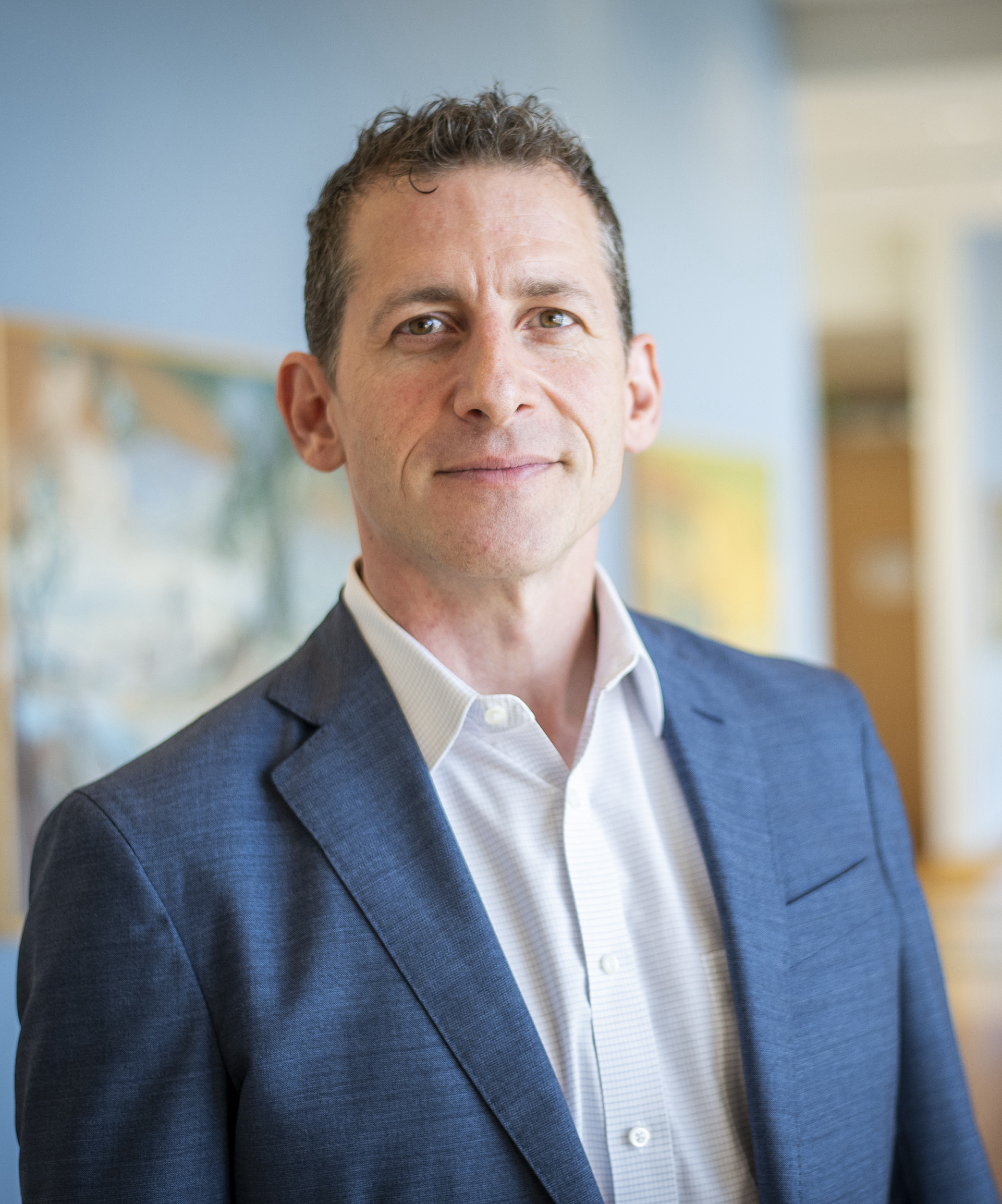 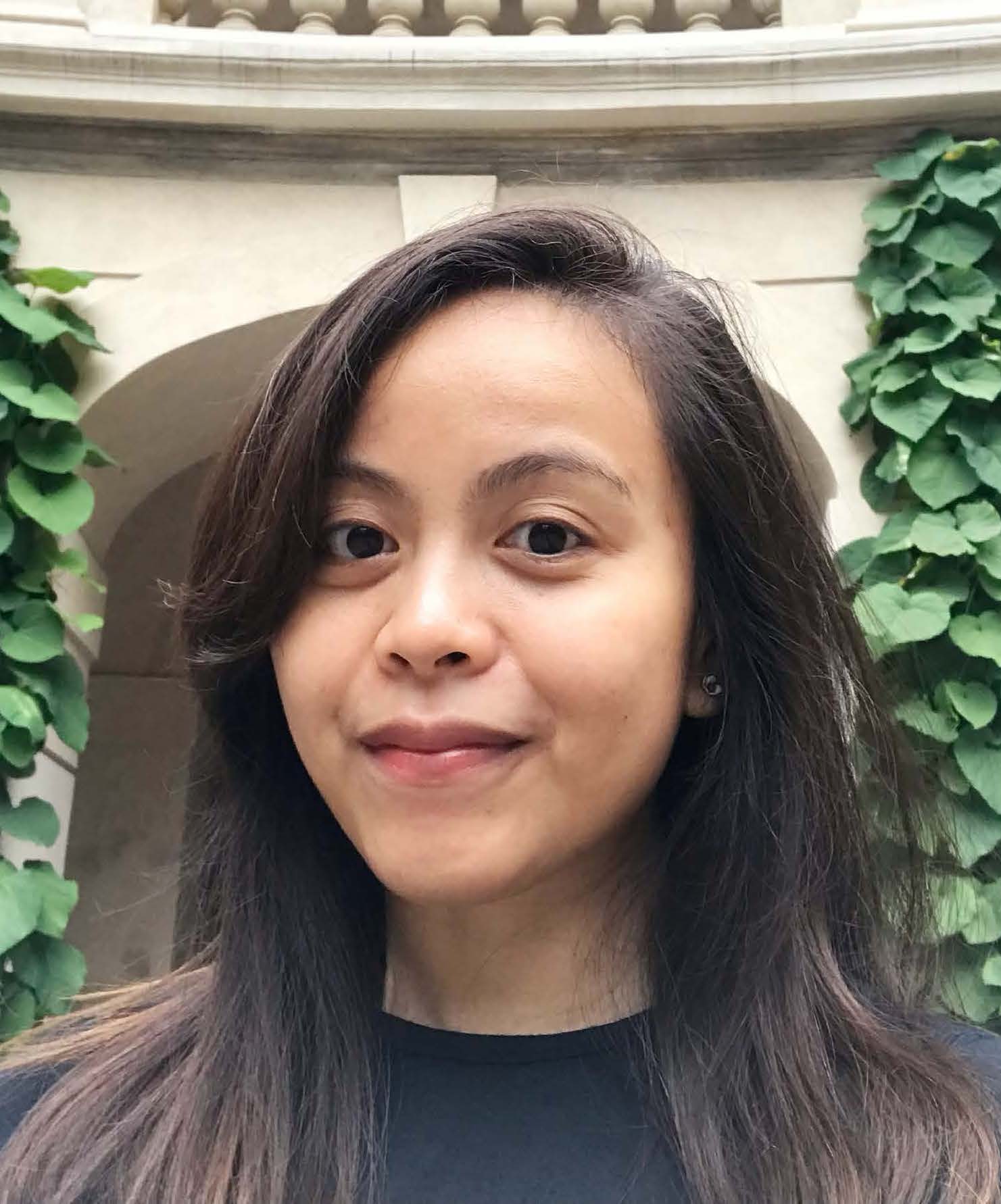 Thirty years ago, one of us was in the African country then known as Zaïre, travelling on the Trans-African Highway, which had become nothing more than a dirt path encroached on both sides by jungle. The condition of the highway and the absence of villages reflected the immiseration of physical and human capital from decades of misrule by President Mobutu Sese Seko. Acknowledging this immiseration, an ecologist in my vehicle noted, “Yeah, Mobutu has been absolutely terrible for the people of Zaïre, but he’s been great for the environment.” For the first time in a long time, the forest was expanding at the expense of humans, rather than the other way around.

Poverty reduction and protection of ecosystems

Actions to reduce poverty and actions to protect ecosystems are often framed as at odds with each other. If true, this framing is troubling because reducing poverty and slowing biodiversity and ecosystem loss are two of the great global challenges of the 21st century, and because the most endangered species and ecosystems are disproportionately located in regions with high levels of poverty (Fisher and Christopher 2007).

Estimating the effects of anti-poverty programmes on ecosystems and the mechanisms through which they operate is challenging. Take, for example, the case of conditional cash transfers (CCTs), a globally popular way to transfer income to poor households and enhance human capital, thereby reducing the intergenerational transfer of poverty. The CCT intervention itself is relatively straightforward – cash is transferred conditional on household members taking specific actions, often related to education and health. Yet the mechanisms through which those transfers can affect, for example, deforestation of biodiverse tropical forests are complex (see Figure 1, which itself is a simplification of the full set of pathways). Moreover, given that most CCTs in forested areas are not implemented in randomised designs, disentangling the effects of CCTs on deforestation from the effects of confounding factors that affect both deforestation and the spatial and temporal assignment of CCTs is also challenging.

Figure 1 The channels through which CCTs can affect deforestation 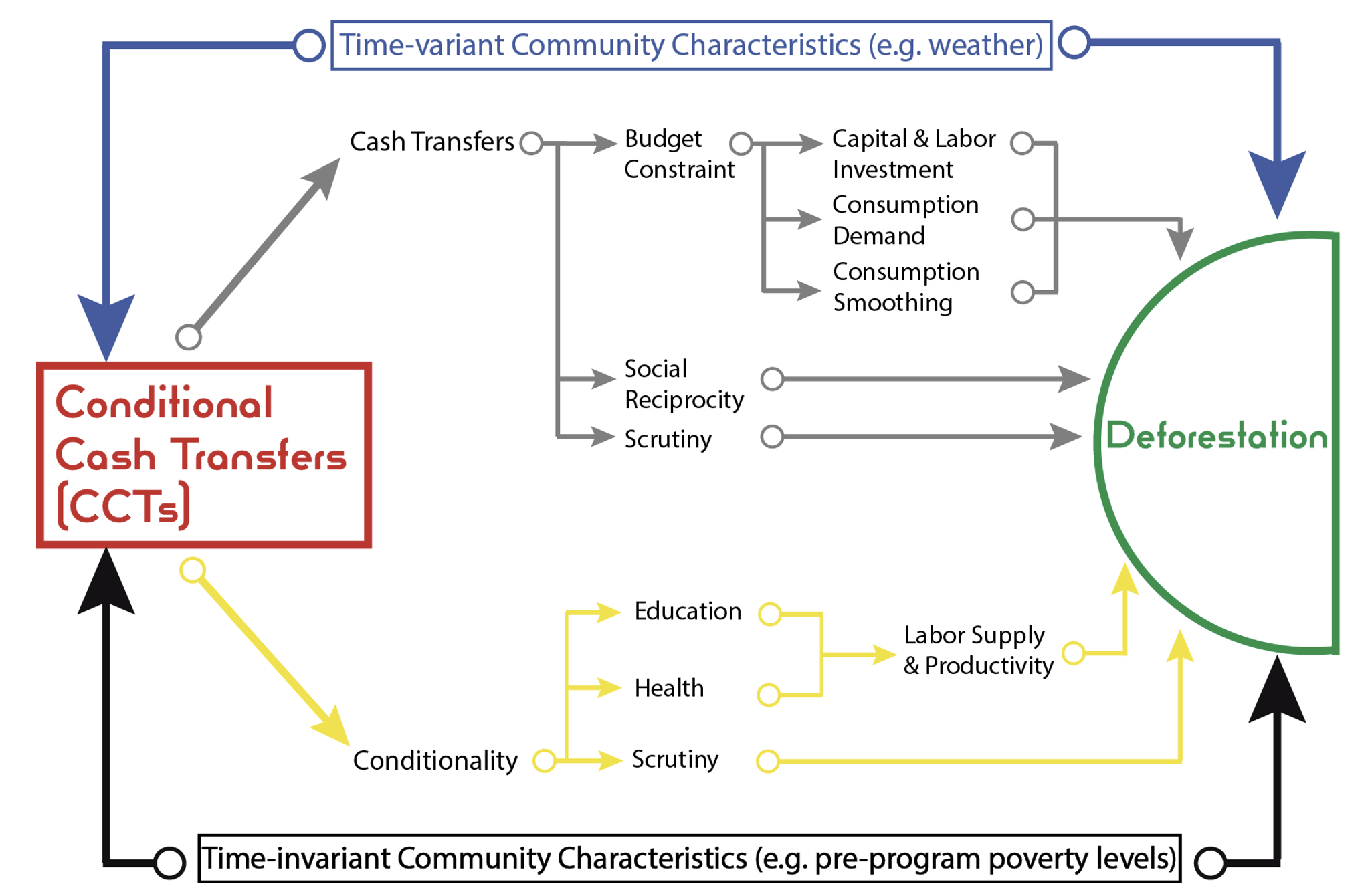 Note: The arrow indicates a potential causal pathway between two variables. To identify the causal effect of CCTs on deforestation, empirical design must eliminate the confounding effects of time varying and time-invariant community characteristics that are correlated with both deforestation and exposure to CCTs.
Source: Reprinted from Ferraro and Simorangkir (2020). © The Authors, some rights reserved; exclusive licensee AAAS. Distributed under a CC BY-NC 4.0 License (http://creativecommons.org/licenses/by-nc/4.0/)

To tackle these challenges, we designed a study (Ferraro and Simorangkir 2020) to quantify the effects on deforestation from Indonesia’s national CCT programme – Program Keluarga Harapan (PKH, or ‘Family Hopes Programme’). PKH transfers cash to millions of poor households each year, conditional on household members meeting health and education obligations (e.g. children receiving vaccinations and attending primary school). Evaluations of PKH imply that the transfers elevated household expenditures above the poverty line. Although PKH was not designed to affect deforestation, economic theory and field experience imply that there are numerous pathways through which conditional cash transfers could affect it, as shown in Figure 1.

Analysing the effect of PKH on deforestation

To estimate the effect of PKH on deforestation, we combined geo-referenced administrative data, remotely sensed panel data on forest cover loss, a field-verified understanding of how PKH was phased in over time, and statistical estimators designed for estimating impact from panel data. Our study comprises 7,468 rural forested villages exposed to PKH between 2008 and 2012 across 15 provinces. By 2012, 266,533 households in these villages were participating in PKH.

Even without controlling for any covariates, the changes in pre-programme average deforestation levels in villages that were exposed to PKH in the earliest cohort of villages (2008-2010) were similar to the changes in villages that were in the later cohort (2011-2012), as shown in Figure 2. That similarity suggested that, with further statistical controls for potential confounding factors, the later cohort villages could serve as a control group for the earlier cohort villages. Exploiting the staggered phase-in of PKH over time, we employed a linear, additive, two-way fixed effects panel data estimator using only the sample of 7,468 rural villages that were exposed to PKH sometime between 2008 and 2012.

PKH had a positive impact on deforestation in villages

On average, exposure to PKH was associated with a 30% (~5.5 hectare/year/village) reduction in annual deforestation in a village. The estimated average reduction in deforestation became larger as the density of participating households per hectare of forest increased and as the length of time a village was exposed to the PKH increased. We found no statistical evidence of spillover effects in neighbouring non-PKH villages. Because inferring causality from correlations is challenging in nonexperimental contexts, we also subjected our analysis to a battery of robustness checks and found that the estimated effects were similar to the original estimate in sign and magnitude. 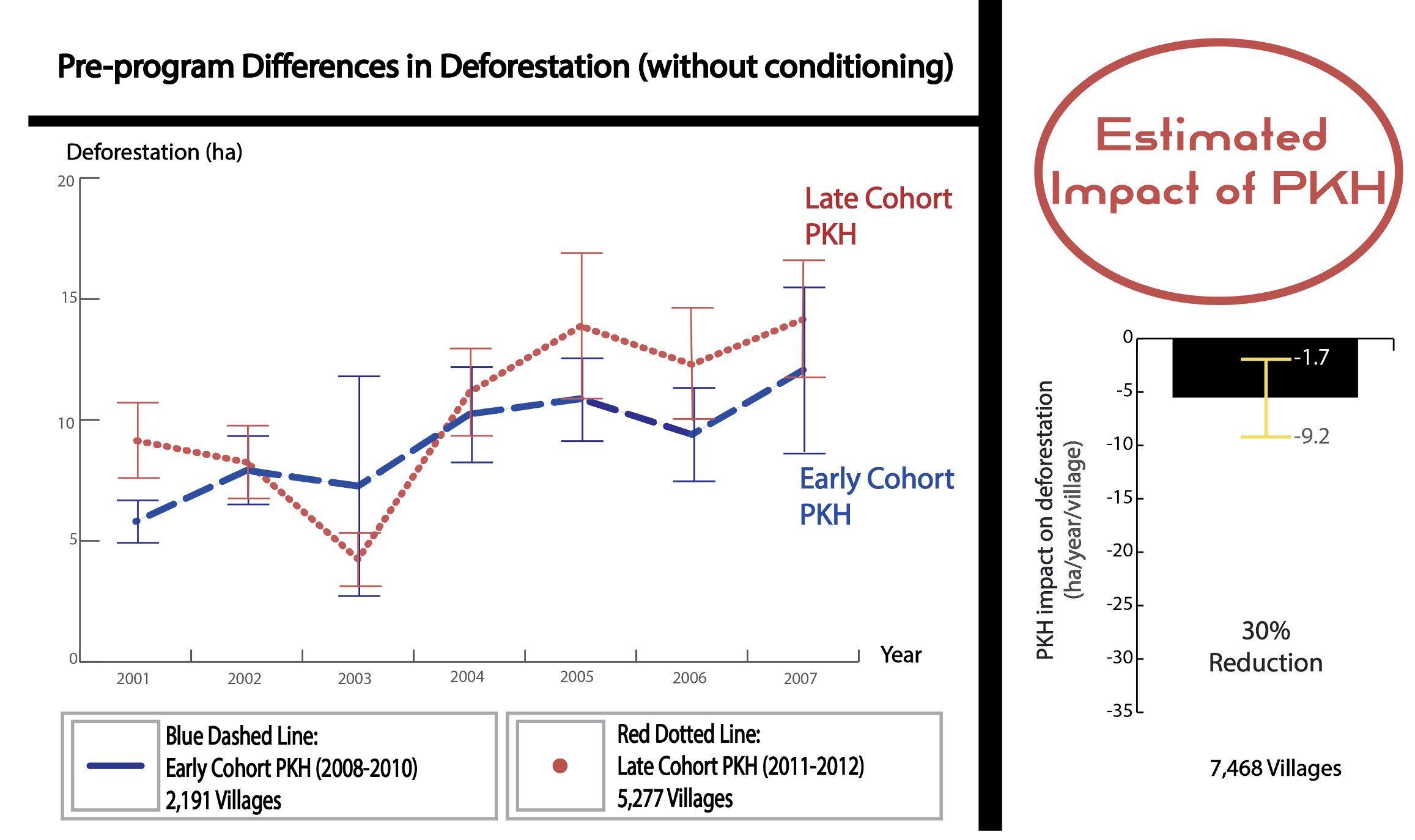 Note: The figure shows changes in pre-programme average levels of deforestation in villages exposed to PKH, both for early and late cohorts. Standard error estimates were clustered at the subdistrict level.
Source: Modified from Ferraro and Simorangkir (2020). © The Authors, some rights reserved; exclusive licensee AAAS. Distributed under a CC BY-NC 4.0 License (http://creativecommons.org/licenses/by-nc/4.0/).

Because of data limitations, identifying the mechanisms through which PKH reduced forest loss is more challenging than estimating the amount of forest loss. To identify the most plausible mechanisms, we drew on economic theory and field knowledge to predict patterns in the data that would be most closely aligned with each mechanism (and, importantly, not with the other mechanisms). We then used field data to test these predictions. The analysis implies that the environmental impact of PKH was mediated through at least two channels:

These channels could be operative in many low and middle-income countries with CCT programs, implying that similar results could be observed elsewhere.

Fisher, B and T Christopher (2007), “Poverty and biodiversity: Measuring the overlap of human poverty and the biodiversity hotspots”, Ecological Economics 62(1): 93–101.