How a rising minimum wage reduced earnings inequality in Brazil 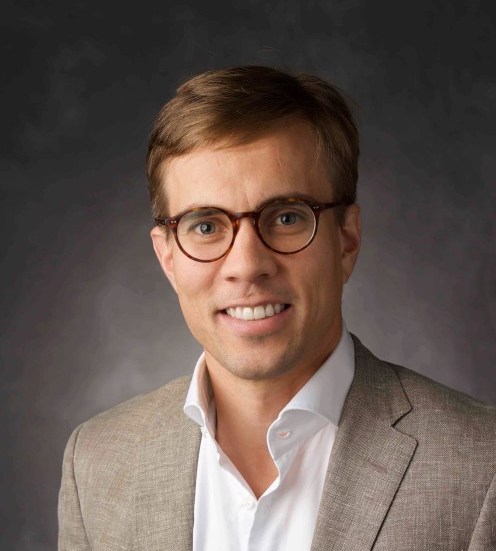 Over a 16-year period, the Brazilian government more than doubled the real minimum wage. During the same time frame, earnings inequality decreased substantially

As the US election cycle gears up, issues of economic inequality and proposals for a higher minimum wage promise to make for contentious debate. For a long time, economists have studied the effects in developed countries of a minimum wage on economic outcomes such as employment, consumer prices, wages, and industry dynamics (Card and Krueger 1994, Aaronson 2001, Autor et al. 2016, Aaronson et al. 2018). Recently, a small but rapidly growing strand of the research literature has begun studying the effects of the minimum wage in lower-income countries.

In both developed and emerging economies, many basic questions regarding the impact of the minimum wage, however, remain unanswered. Critically:

In two recent studies, we chose Brazil as a real-life laboratory for examining the effects of a rising minimum wage (Alvarez et al. 2018, Engbom and Moser 2018). While Brazil has around one sixth of the per-capita income of the US, both countries have a highly unequal income distribution. Importantly, the results for South America’s largest economy are striking and some of these lessons could indeed carry over elsewhere.

What happened in Brazil?

In addition to its large economy and inequality levels, we chose Brazil because administrative government records and household surveys provide a trove of useful microdata on employer- and employee-related drivers of earnings differences. We took a first look at these microdata through the lens of an econometric model based on the method developed by Abowd et al. (1999), which controls for key dimensions of worker and firm differences in pay. This high-dimensional econometric model allowed us to separately account for worker and firm heterogeneity in pay within rolling time windows.

We find that between 1996 and 2012, the earnings gap between the upper and lower earnings levels in Brazil decreased by 11%. This sizeable decline in earnings inequality resembles the experience of other Latin American economies during this period, but stands in stark contrast to that of the US and many developed countries, which saw steady increases in inequality over the past two decades.

To be sure, Brazil has experienced many societal, regulatory and economic changes since the early 1990s, ranging from high rates of inflation and a financial crisis to the expansion of various social programmes. Notably, the country also increased the real minimum wage by 119% during this period, which our analysis indicates was the main catalyst in decreasing income discrepancies. Figure 1 shows the evolution of earnings inequality, measured as the variance of log earnings, and that of the real minimum wage over the period 1988-2012. 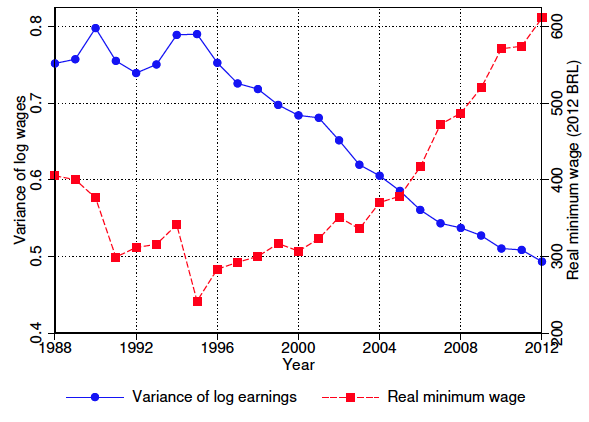 Raising the minimum wage affected both specific worker skill groups and the businesses hiring them. This is important because narrowing the pay gap across companies has contributed to a substantial decline in Brazil’s earnings inequality since 1990. The share of adult male workers employed at the minimum wage level is well below 10% in Brazil. But employers bumped up earnings for all employees up to the 80th percentile once the floor was raised.

The reason for such wide-ranging action was to maintain a competitive edge in the jobs market, particularly among specific industries or skill sets. Once the lowest paying employers complied with minimum wage hikes, higher-paying counterparts reacted by pushing up their pay scale to maintain employment at equilibrium. Pay discrepancies between Brazilian firms tended to be substantial in the early 1990s, which allowed for ample room for such pay spillovers between employers.

The impact of a higher minimum wage was disproportionately felt in those areas of Brazil and in industries with initially lower average income levels. This led to a pronounced rise in average earnings at the bottom of the national income distribution and a sharp decline in lower-tail earnings inequality (e.g. the 50-10 earnings percentile ratio).

As companies increased their pay, they allotted a higher percentage of their budget to payroll. This cut into firm profits, particularly for small and less productive enterprises. Consequently, as the share of their budgets earmarked for labour increased, some companies responded by reducing their hiring.

At the same time, however, workers gravitated to better paying (and more productive) companies, where workers always receive a lower share of their productive value. As a result, the overall increase in labour’s share of profits, as well as the negative employment response, was dampened.

How the Brazilian workforce changed

The profile of Brazilian workers evolved as well in the 16 years between 1996 and 2012, which may have also contributed to the decline in earnings inequality. One example being that employees became more likely to change jobs. While still less frequent than in the US, migration between jobs became a powerful engine for individual earnings growth.

Over time, the average education level of Brazilian workers increased. However, our results do not support the often-articulated view that a better educated workforce spurred Brazil’s inequality squeeze. Companies tended to discount the premium previously placed on high school and college degrees, at the same time as educational attainment soared over this period. Simply put, education became more of a commodity.

The age structure of the workforce went through a transition as well with the age distribution tilting towards older workers. As with education, the rise in the minimum wage led employers to discount relative experience levels of an older workforce.

We estimate that demographics and changes in worker input contributed about 29% to the narrowing of Brazil’s income gap. Our findings attribute a bigger share (40%) of the reduction to the minimum wage hikes and employer responses to raising that wage floor. We attribute two thirds of the change in between-firm inequality to firms’ equilibrium response of raising pay even if the minimum wage was not binding for them, resulting in ‘trickle-up’ wage hikes to higher-paid individuals.

Concluding remarks: The effect of a rising minimum wage on inequality depends on the economic context

To be sure, notable differences exist between emerging and developed markets. The increase in the minimum wage may have had an outsized effect on reducing earnings inequality in Brazil because the income gap was initially very high. The effects of a rising minimum wage on inequality could be much smaller and the impact on employment more negative under different labour market conditions, such as those in more developed countries. For example, previous work on the effects of the minimum wage on the earnings distribution in the US indicates spillovers up to only the 20th percentile of earnings distribution (Autor et al. 2016). However, the striking results that Brazil achieved in narrowing its inequality gap may offer lessons that could carry over to the US and OECD countries. Further work is needed to assess the size and determinants of spillovers of the minimum wage in different economies.

Autor, D H, A Manning and C L Smith (2016), "The Contribution of the Minimum Wage to US Wage Inequality over Three Decades: A Reassessment," American Economic Journal: Applied Economics 8(1): 58-99.