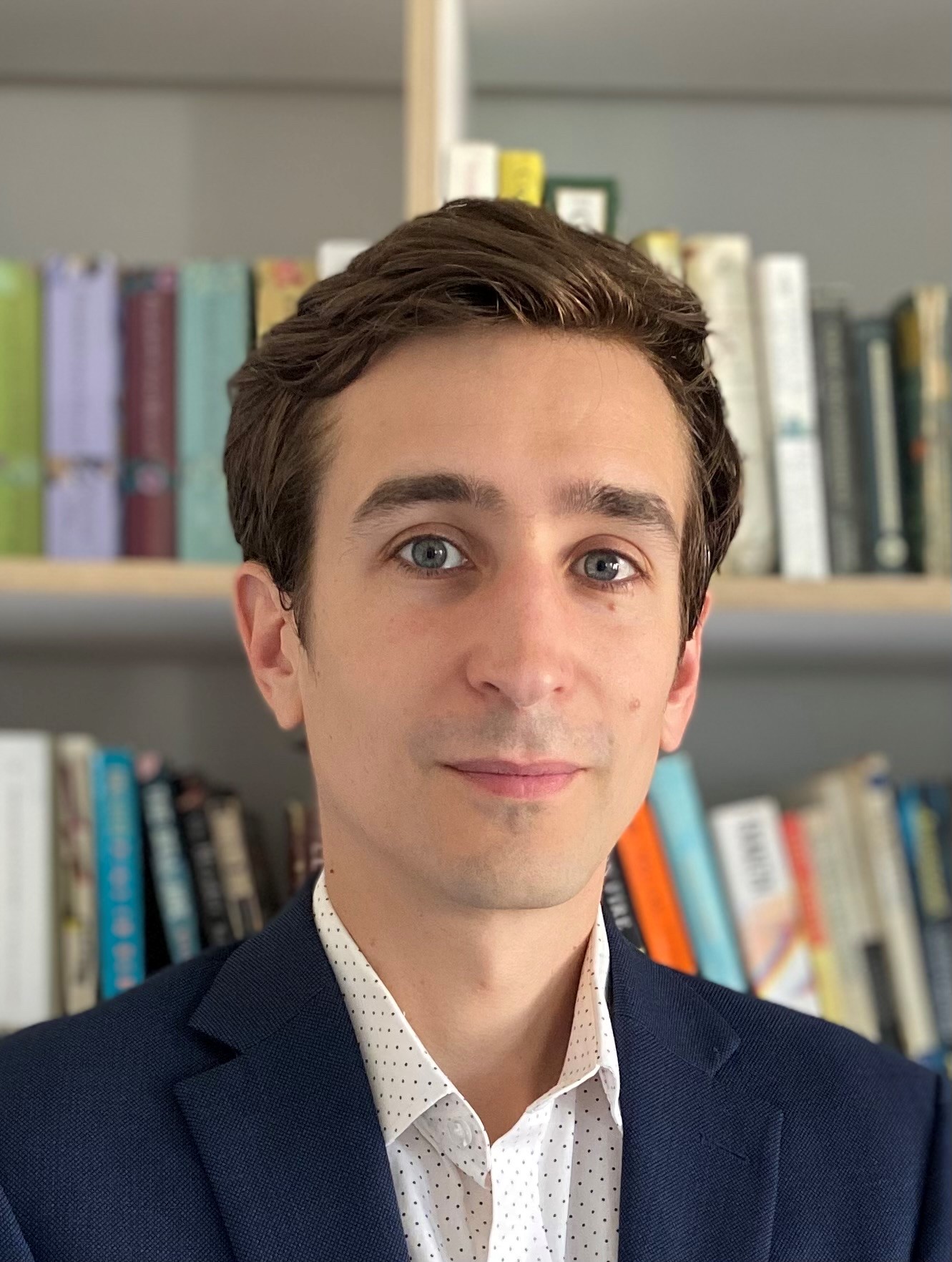 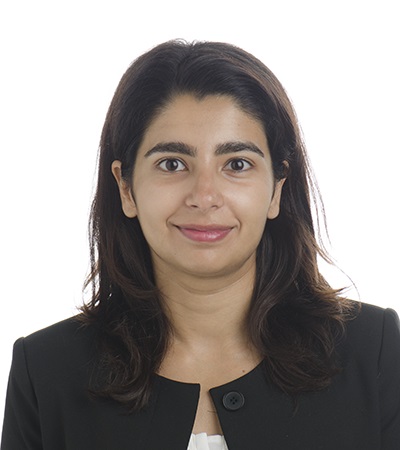 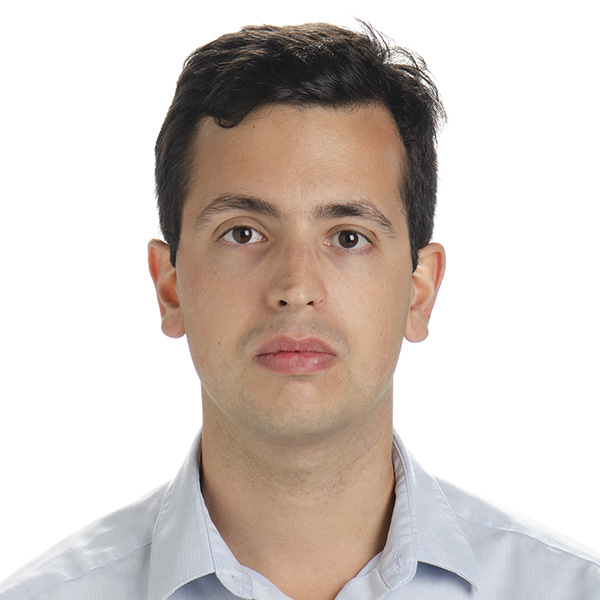 Increasing tax collection is a critical priority for emerging and developing economies seeking to finance their development needs. However, a lack of data and limited institutional capacity often constrains efforts to combat noncompliance, hindering revenue mobilisation and eroding trust in public institutions. In recent years, tax administrations have increasingly turned towards digitalisation to enhance their tax collection capabilities, with Latin America spearheading the use of electronic invoicing (Barriex and Zambrano 2018).

Studying the impact of the e-invoicing reform in Peru

In Bellon, Dabla-Norris, Khalid and Lima et al. (2022), we study the impact of a reform that required registered firms in Peru to switch to electronic invoicing for VAT transactions. Recognising that this new technology would create adjustment costs for firms, the Peruvian tax authority staggered the reform implementation, with larger firms mandated early in the reform, and small and medium-sized firms mandated in later waves.

We exploit this staggered implementation of the e-invoicing reform to assess its impact on firm performance and VAT compliance. Specifically, we compare changes in outcomes for firms required to adopt e-invoicing against firms that had not yet been mandated.

Our analysis uses monthly administrative tax data for all small, medium-sized and large formal firms that were registered to pay VAT over the period 2010 to 2017, accounting for 95% of all VAT collections in the economy in 2013.

We find that reported taxable sales increased by 7.4% among mandated firms after their deadline for adopting e-invoicing, while average reported taxable purchases rose by 6.5%. The latter may seem surprising because one of the common tactics for VAT evasion involves overreporting purchases using fake invoices. In the Peruvian economy, there is a high degree of informality and many unreported transactions. Hence, the introduction of e-invoicing results in improved reporting by both buyers and sellers.

Figure 1 shows the evolution of firm outcomes relative to the quarter in which the firms are mandated to adopt e-invoicing. The figure shows that results are being driven by the reform (which occurs in quarter 0) and not by any pre-existing trends. The treatment effects also become stronger over time, with VAT liabilities increasing by over 15% in the fourth quarter after the reform. 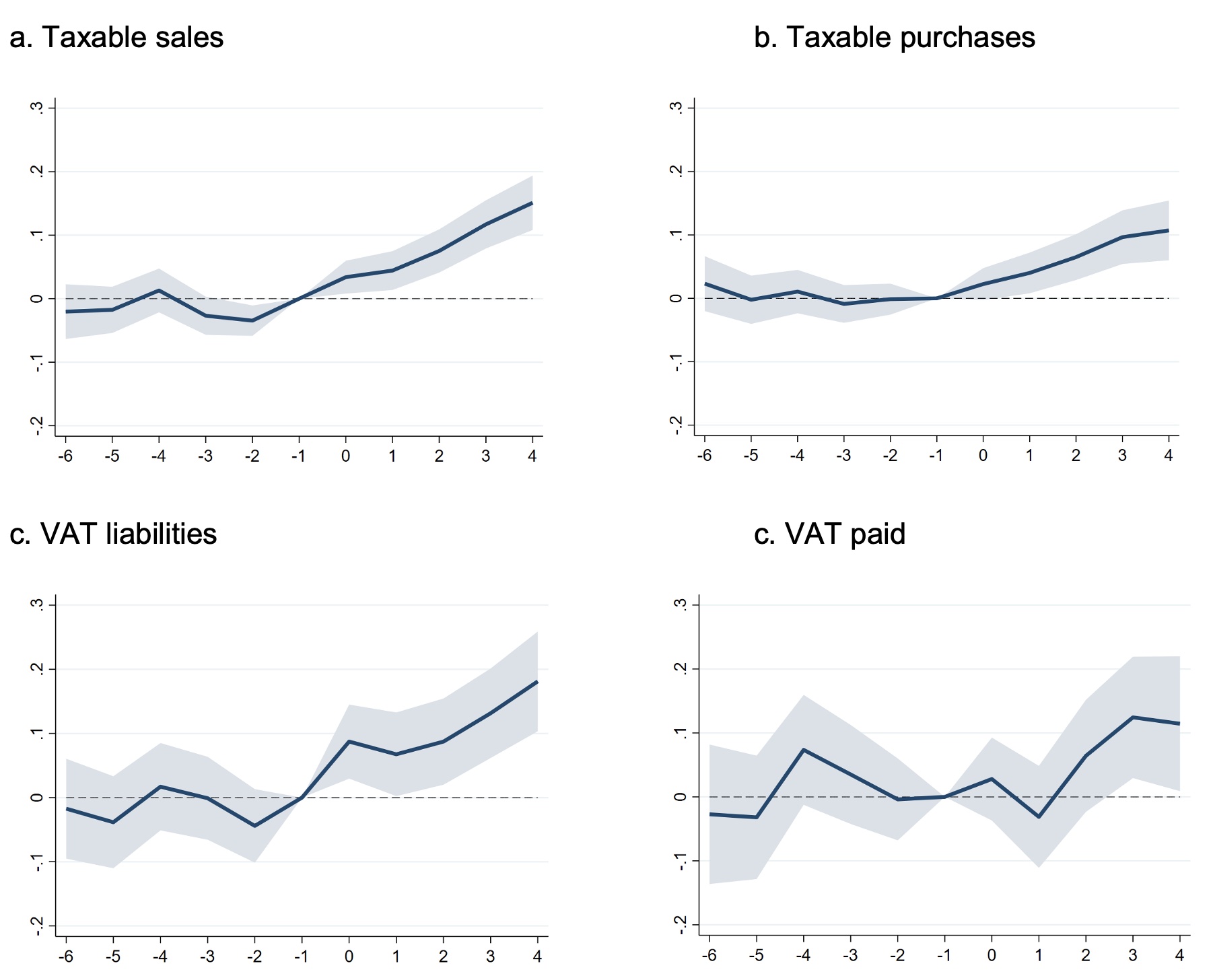 Note: This figure plots the point estimates (solid line) and the 95% confidence intervals (shaded area) of the effect of being mandated into e-invoicing adoption, where 0 represents the quarter of mandatory adoption.

Smaller firms are harder to monitor, use cash more frequently and are less likely to be audited given their small individual contributions to aggregate tax collection. Consequently, existing research finds that technologies that increase the probability of evasion-detection have larger effects on the behaviour of small firms (Slemrod 2019). We explore whether the effect of the reform varied with firm size, and find consistent results.

Reported taxable sales, taxable purchases, and VAT liabilities increased by over 10% with e-invoicing, while VAT payments rose by nearly 20% among small and medium-sized firms in the first year following the reform. Treatment effects among large firms, however, are much smaller and mostly not significant. Figure 2 shows the dynamic evolution of VAT liabilities respectively for large firms and for small and medium firms, with the latter showing treatment effects of the reform in excess of 30% by the end of the fourth quarter following the reform. Evaluating heterogeneity in firm outcomes by economic sector, we also find larger reform effects in the construction and services sector, which traditionally have large compliance gaps.

Figure 2 Heterogeneity in Impact of e-invoicing by firm size

Note: This figure plots the point estimates (solid line) and the 95% confidence intervals (shaded area) of the effect of being mandated into e-invoicing adoption, where 0 represents the quarter of mandatory adoption.

Many firms in Peru carry a positive stock of VAT credits that can be used to offset VAT liabilities and therefore reduce VAT payment obligations. Consistent with this, we find that VAT payments declined among firms with pre-existing VAT credits relative to firms who had no such credits. Further, such firms were also able to accumulate more VAT credits after the reform. Once these credits are used up as offsets against VAT obligations, the effect of the reform on VAT payments should grow. However, the faster accumulation of VAT credits amongst some firms indicates potential new avenues of evasion that require vigilance from the tax authority.

Our dynamic specification indicates that the impact of the e-invoicing reform appeared to grow over time. In addition, during the period under study, the Peruvian tax authority did not make changes to its compliance risk management strategy to leverage the additional information from e-invoicing. Hence, the effect captured by the study is driven purely by a deterrence effect caused by a perceived increase in the probability of monitoring. Further improvements in monitoring and audit processes that exploit the information generated by the e-invoicing system could deliver greater benefits in deterring VAT noncompliance. Consequently, the effects captured in our study are a lower bound for the potential benefits from embracing digitalisation. It should also be noted that our study does not capture the potential long-term benefits of digitalisation on firm productivity, including lower compliance costs, and improvements in digital capacity and competitiveness.