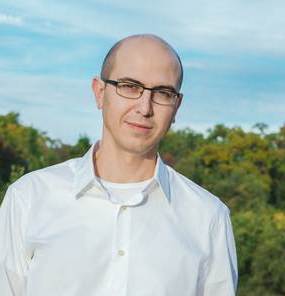 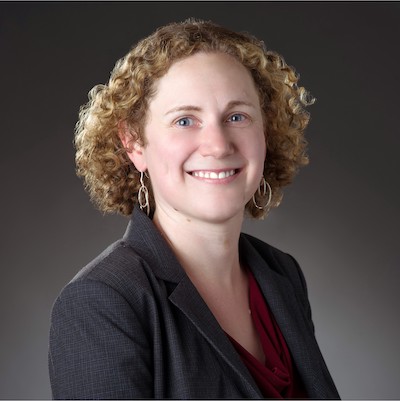 Institutions and policies preventing the efficient allocation of resources among farmers can impede the growth process in low-income countries (Adamopoulos and Restuccia 2014). Much of the focus in the literature is on the distortionary effect of these institutions on the allocation of resources across farmers (misallocation). This ignores the effect of these same institutions on who actually farms (selection). Selection effects can significantly amplify the costs of misallocation, suggesting the potential for even larger gains from reforms that provide farming households more secure transferable rights.

A history of land reforms in China

The Household Responsibility System (HRS), established in rural China in the late 1970s and early 1980s, dismantled collective farming under Mao and extended use rights over farmland to rural households. These reforms triggered an initial spurt in productivity growth in agriculture in the early 1980s that subsequently dissipated (Lin 1991).

Under the HRS, ownership of agricultural land remained vested with the village. Village officials administratively allocated use rights among rural households on a highly egalitarian basis that largely reflected household size. The law governing the HRS provided secure use rights over cultivated land for 15 years, which were extended to 30 years in the late 1990s. In addition, village cadre frequently reallocated land among households before the 15-year period expired (Benjamin et al. 2002). A primary motivation of the reallocations was to accommodate demographic changes within a village.

In principle, households had the right to transfer their use rights to other households; however, land rental markets were thin. Over the period we analyse, less than 5% of land was rented in. Average farm size also remained small – less than two-thirds of a hectare. The limited room for farm rental activity is frequently associated with perceived ‘use it or lose it’ rules (Giles and Mu 2018): households that did not use their land and either rented it to others or let it lie fallow risked losing the land during the next reallocation. This egalitarian allocation of land combined with implicit constraints on land rentals made it difficult for more abled farmers to expand the size of their farming operations, inducing selection into agriculture.

In our study to assess the effect of China’s land policies (Adamopoulos, Brandt, Leight and Restuccia 2021), we utilise rural household survey data collected by the Research Center for Rural Economy under the Ministry of Agriculture in China between 1993 and 2002. Over this period, China’s rural land institutions remained largely unchanged. The survey provides highly detailed information on household income, labour supply, and inputs and outputs in agriculture. The panel dimensions of these data that track individual households over multiple years help address important issues of measurement error related to the use of cross-sectional data that can cause upward biased estimates of misallocation (Bils et al. 2017) and thus, potential gains to changes in property rights and land institutions.

Figure 1 documents the relationship between land use and farm productivity for the more than 6,000 households in our panel data. The blue-dotted line is the estimated relationship between land use and farm productivity, and red-dotted line reflects an efficient allocation of land. If land is allocated efficiently across farm households within a village, more productive farms should use more land. The key message from Figure 1 is that land institutions prevented the flow of resources to China’s most productive farmers. 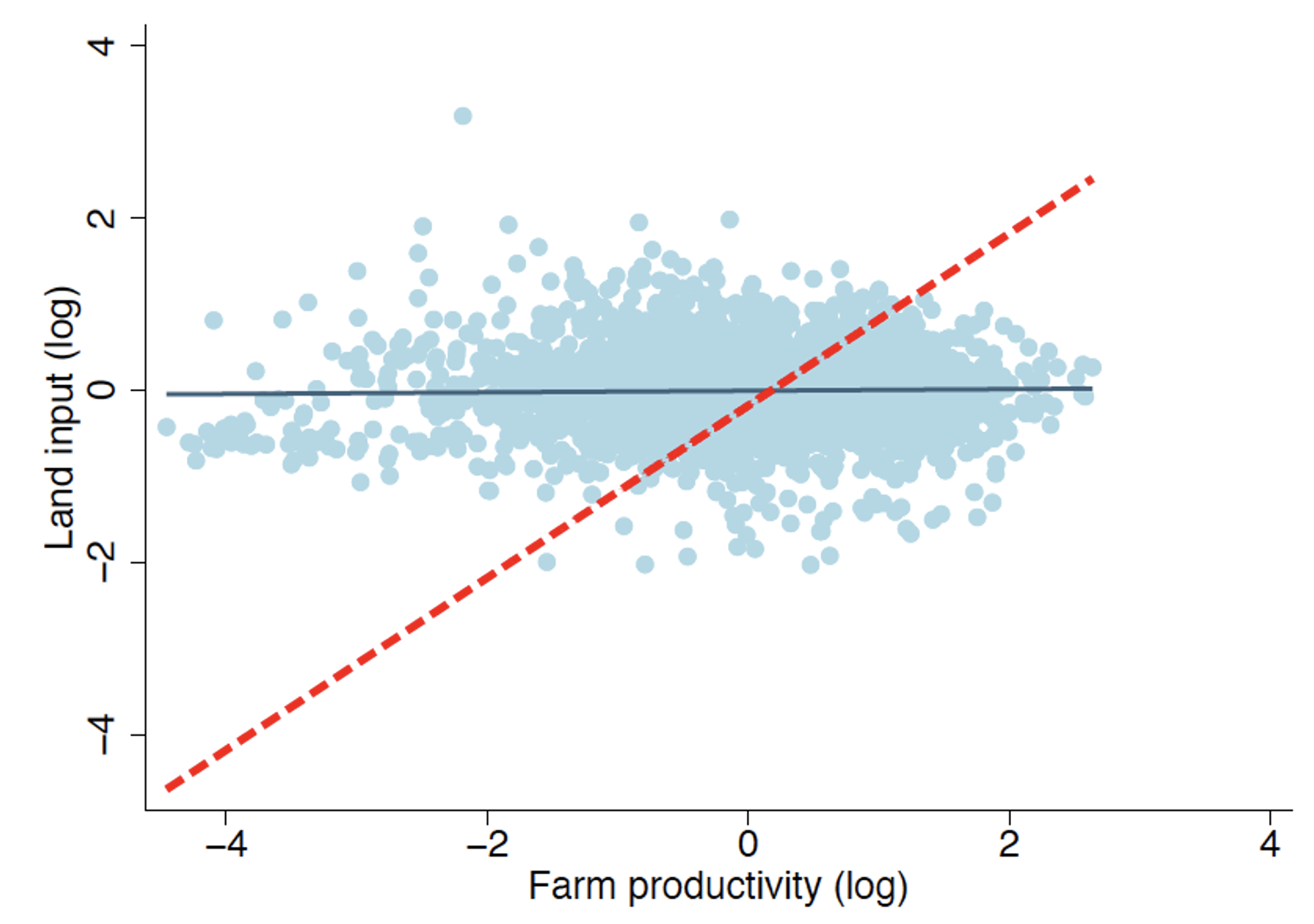 Holding current total input use constant, we find that eliminating misallocation across household farms within villages increases aggregate total factor productivity (TFP) and agricultural output by 24.4%. The majority of these gains (60%) are due to reallocating resources across households that differ in their productivity. Using more conventional cross-sectional measures of farm-level TFP and distortions common to the literature, average reallocation gains are 54% within villages (compared to our 24.4.%), suggesting these conventional measures likely over-estimate reallocation gains.

However, households also differ in the difficulty they face in accessing farm inputs, most notably, land and capital. In Figure 2, we plot our measure of farm-level distortions, TFPR, against farm TFP for our panel set of households. This measure captures differences in prices of inputs relative to output prices across farmers, with larger values signifying more difficulty in securing inputs. Note the very strong correlation between farm distortions and TFP, with a correlation of 0.91 – more productive farmers face larger distortions. This implies that the farmers hurt most by China’s institutional setting are the more productive ones who would have otherwise expanded their farming operations. 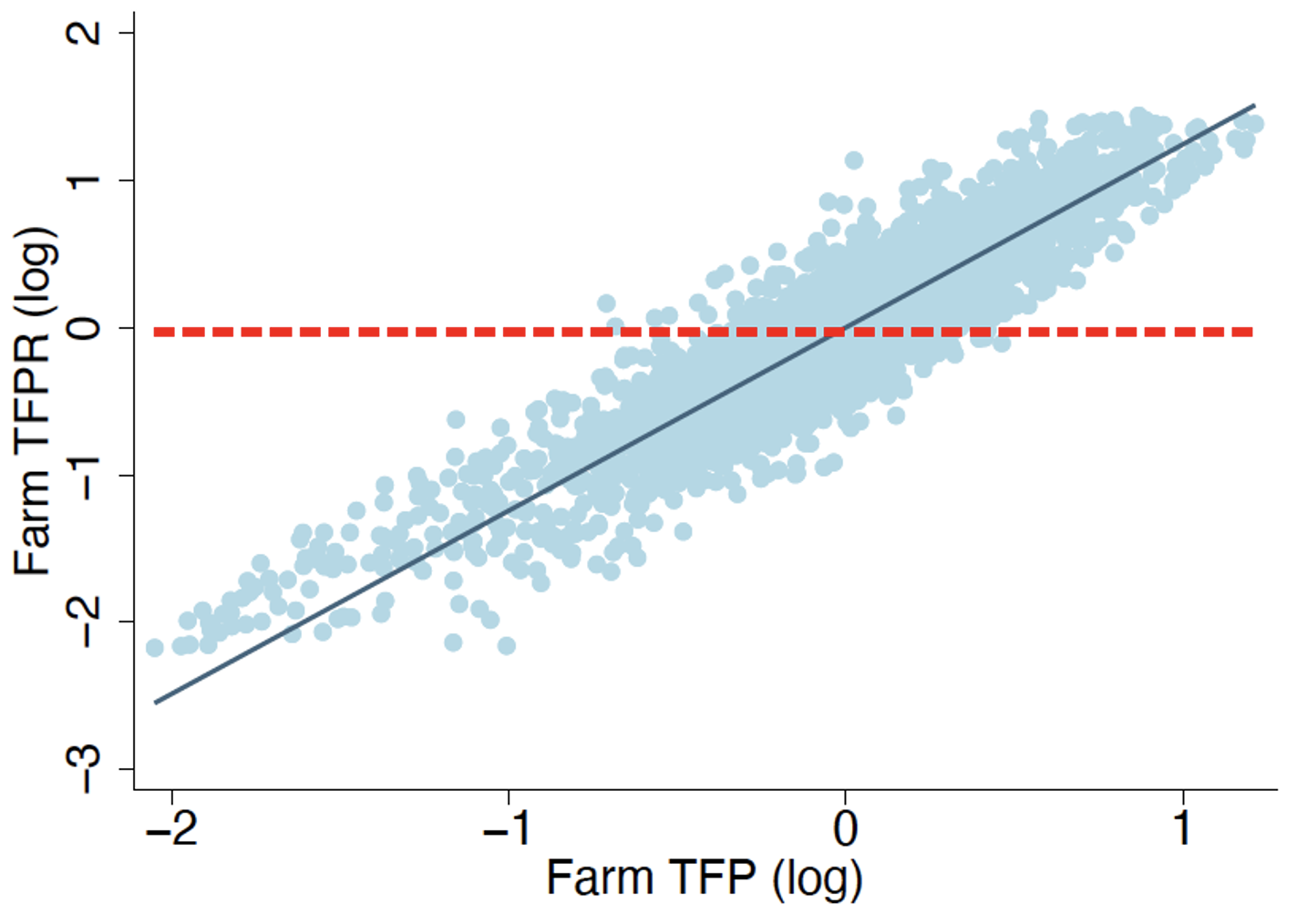 How big are these amplification effects?

To examine these effects, we develop and estimate a two-sector general equilibrium model of occupational choice that leverages our measures of household-level farm distortions and TFP, and panel household data on incomes in agriculture and non-agriculture. Table 1 reports the effects of a counterfactual exercise that eliminates those distortions that are correlated with farmer productivity.1 Eliminating these ’correlated’ distortions within villages, agricultural TFP rises 67%, two and a half times the improvements through simply eliminating static misallocation. Labour productivity in agriculture rises by almost three-fold, a product of the increase in agricultural TFP and a reduction in the share of the labour force in farming from 46% to only 16%.

Table 1 The effects of correlated distortions

Note: We eliminate the component of farm-level distortions that is associated with agricultural ability. Aggregate variables, except for the share of employment in agriculture, are reported relative to values in the ‘benchmark economy’.

The increase in agricultural TFP can be attributed to a reduction in misallocation across farms, and to incentives for higher ability farmers to work in agriculture with the removal of the constraints on farm size. Improvements in productivity through these two channels reduce the share of employment in agriculture, which further raises agricultural labour productivity by increasing the amount of inputs per farmer.

In contrast, average ability, and hence real labour productivity in non-agriculture falls with the reallocation of workers to the non-agricultural sector, not all of whom are as productive in that sector. Despite the significant impact on labour productivity in agriculture, real GDP per worker increases a more modest 18%. This reflects the dampened effect on aggregate output associated with the large shift of labour to a sector that experiences a fall in productivity relative to the benchmark. Nonetheless, these gains remain sizable relative to real GDP growth.

A key and novel insight of our research is that selection likely amplified the misallocation effect of distortionary policies through their effect on who decides to farm. This misallocation may have the largest negative effect on more highly skilled farmers, who are then less likely to farm. But new laws and policy frameworks are also changing the nature of these relationships, offering several important areas for future research.

The implementation of the Land Management Law (LML) in 1998 and the Rural Land Contracting Law (RCLC) in 2003 helped to address some of the land security issues by restricting village reallocations and reaffirming households’ rights to rent out their land (see Chari et al. 2021 for an assessment of these reforms). In 2018, a more formal titling of land began. Pilot experiments have also been carried out in several major Chinese cities that further expanded household land rights, including, for example, the right to use land as collateral.

In some policy circles, China’s set of land institutions were seen as vital to social security and equity considerations, a dimension we abstract from in this paper. Examining the implications of these reforms for both is important. Consolidations of farm operations, enabled through these reforms, could improve not only the allocation of resources and selection but also incentivise mechanisation and other productivity-enhancing investments. Finally, more secure property rights can lead to better allocations across sectors and space which we explore in new work (Adamopoulos et. al. 2021).

1 Note that in this experiment there is still misallocation associated with dispersion of distortions unrelated to farm productivity.