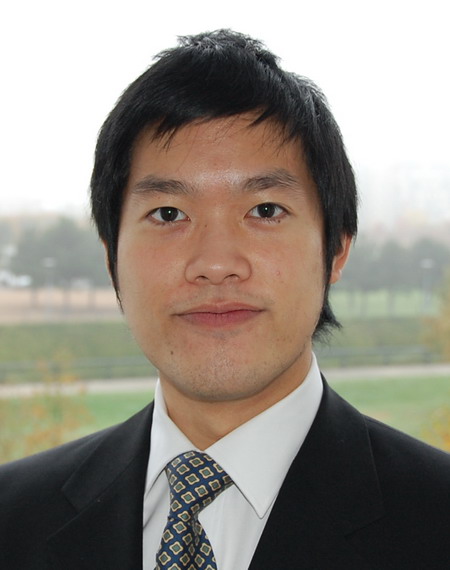 Reader in Economics, University of Surrey 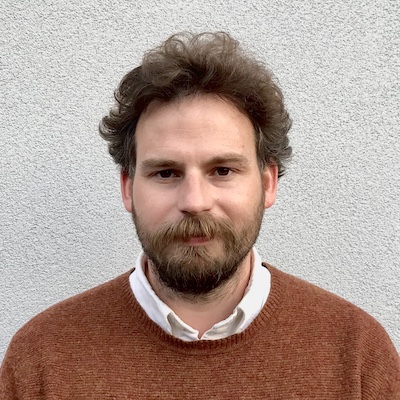 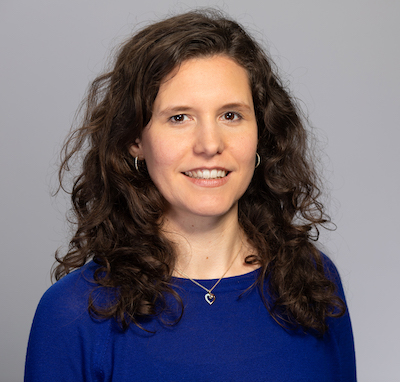 A new index of ethnic stratification reveals that ethnic differences matter for conflict if, and only if, they coincide with economic differences

What are the determinants of social conflict, be it in the form of mistrust within a community or tragic outbreaks of organised violence? Conflict and contact theory both play a prominent role in addressing this crucial question. Conflict theory predicts that diversity and interactions between distant ethnic groups can lead to perceived threat, greater antagonism, mistrust, and conflict. There is considerable evidence that ethnic diversity (typically measured by indices of ethnic fractionalisation or polarisation) indeed leads to higher social conflict (e.g. Alesina and La Ferrara 2000, Montalvo and Reynal-Querol 2005, Esteban et al. 2012). In contrast, contact theory, which goes back to Allport (1954), states that intergroup contact can reduce prejudice towards other groups and, thereby, increase trust and reduce conflict. However, Allport expected this positive outcome only if ethnic groups had “equal status” (i.e. are socioeconomically similar). Hence, conflict and contact theory are not mutually exclusive: they are both consistent with social conflict between interacting ethnic groups if such groups are hierarchically ranked by their economic status. Some recent studies indeed find that higher levels of between-group inequality are related to less trust (Tesei 2017) and more conflict (e.g. Cederman et al. 2011).

A new index of ethnic stratification

The Igbos in Nigeria

The experience of the Igbos in Nigeria illustrates the importance of ethnic stratification. After independence, many Igbos were relatively well-educated because of the efforts of Christian mission schools. Since there were few economic opportunities in their native Eastern Region, they migrated to other regions of Nigeria. The resulting ethnic stratification was higher in towns in the Hausa-dominated Northern Region than in towns in the Yoruba-dominated Western Region for two reasons:

Inspired by this example, we investigate whether ethnic stratification is a predictor of social conflict in African towns and villages. For this purpose, we use geocoded individual-level data from Afrobarometer surveys (BenYishay et al. 2017, Afrobarometer 2018) conducted in 26 ethnically diverse African countries between 2011 and 2013. We use data from 21,379 respondents to measure ethnic stratification in 2,558 towns and villages. We merge the respondents’ languages and ethnicities to the Ethnologue database (Gordon Jr. 2005), which is modelled as trees that show the historical relation between all languages. This allows us to compute ethnolinguistic distances between individuals. To get a measure of economic distances, we construct a wealth index based on information on assets a respondent's household possesses. Given ethnolinguistic and economic distances between any two respondents, we can compute ethnic stratification for our towns and villages.

We find that individuals living in towns and villages with higher ethnic stratification are less likely to trust their relatives, neighbours and other acquaintances (Model 1 in Figure 1): an increase in ethnic stratification by one standard deviation coincides with a reduction in the probability that a respondent trusts her relatives, neighbours and others by 1.4, 2.5 and 2.1 percentage points, respectively.

Figure 1 The effects of ethnic stratification on trust 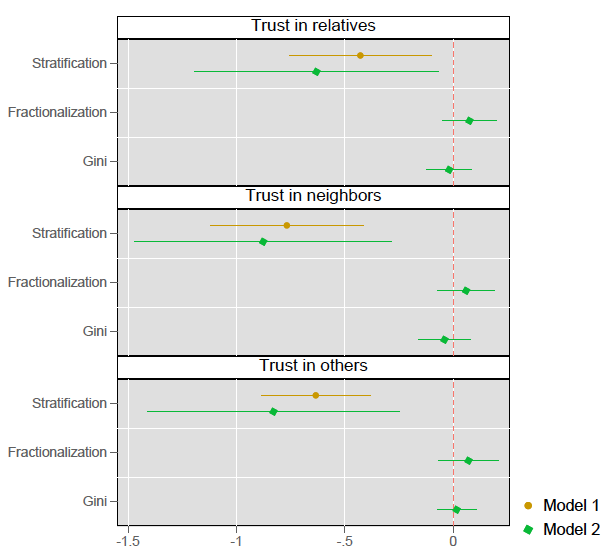 Notes: This figure plots the point estimates and 95% confidence intervals of two regressions/models, which both include interacted country-ethnic group fixed effects and a rich set of individual and geographical control variables.

Our results for ethnic stratification remain robust to including ethnic fractionalisation, the Gini index, and average wealth in the regression (Model 2 in Figure 1). Furthermore, ethnic fractionalisation and the Gini index themselves do not have an effect on trust. Consistent with both contact and conflict theory, these results suggest that ethnolinguistic distances between individuals are predictive of mistrust but only if the ethnolinguistic distances go hand-in-hand with economic distances. Along the same lines, we also document that ethnic stratification is positively related to the respondents' fear of crime and to nearby violent conflict events.

Our results confirm that ethnic stratification is a good predictor of social conflict. They therefore emphasise the importance of taking socio-economic hierarchies along ethnolinguistic lines into account. Our index can be used in future research to shed light on the importance of socio-economic hierarchies along social dimensions other than ethnicity, such as caste, religion, or cultural values.

Tesei, A (2017), “Trust and racial income inequality: Evidence from the US”, Working paper.

1 Our index is part of a class of bivariate measures that are expressions of the expected alienation between a randomly selected pair of individuals. We present an axiomatic characterisation that uniquely identifies our index from this class via a set of axioms that we motivate as desirable properties of a measure that generalises between-group inequality.