How air pollution can impact mental health in China 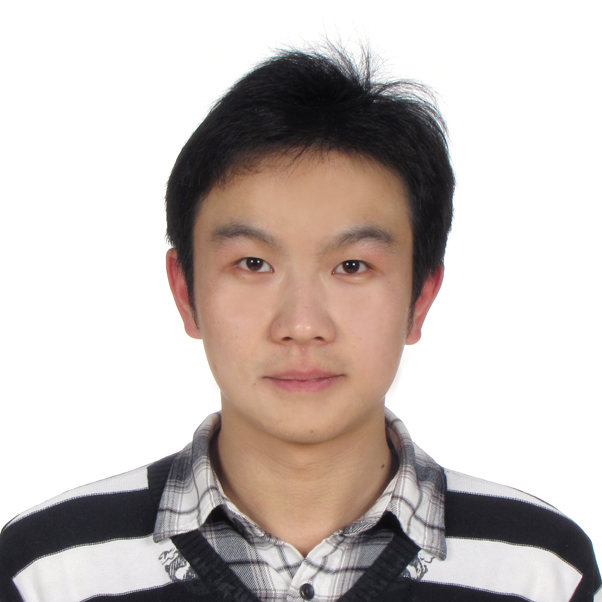 Mental health is becoming a growing concern in China. Although in the past, depression and other mental health issues had been comparatively low according to meta-analysis studies (Chen et al. 1999), changes in demographic factors such as an aging population and smaller family networks stemming from the one-child policy have at least the potential of quickly worsening the burden of disease attributed to mental health. In fact, more recent studies find that current prevalence rates of high depressive symptoms are more than three times as large in China than in other Asian countries such as Indonesia (Lei et al. 2014). The rapid increase in depressive symptoms contrasts with the lack of health services devoted to mental health. Figure 1 shows recent statistics on mental health resources as well as mental health disorders that highlight this discrepancy (WHO Mental Health Atlas 2011). For example, suicide rates among women are higher than in both developed (US and UK) and developing countries (India and Mexico), while suicide rates among male are only second to the US among these four countries. In contrast, the number of psychiatrists and psychologists per 100,000 people is many times smaller in China than in the developed world. 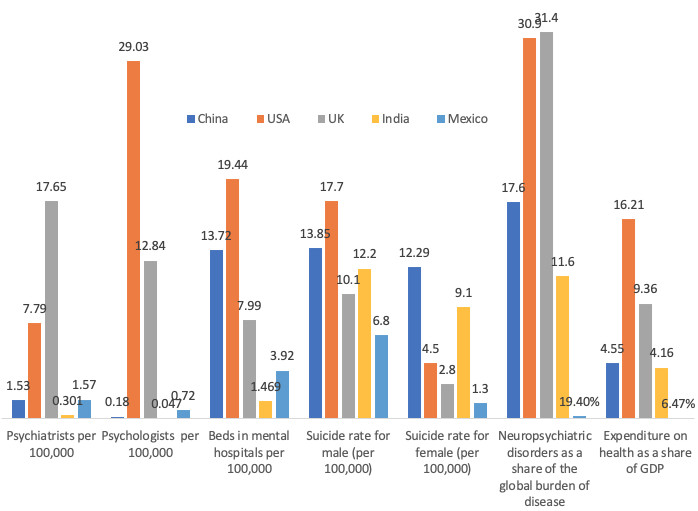 The impact of air pollution on mental health

In light of the growing concern about the status of mental health in China, we study the role of an important factor that may account for some of its worsening in recent decades and can be targeted by policy: air pollution. There are several pathways through which air pollution could affect mental health. One of the most harmful pollutants due to its ability to permeate the human body is PM2.5, or very fine particulate matter. This pollutant could be inhaled into the human body and increase oxidative stress and systemic inflammation. These reactions, in turn, can exacerbate depression and anxiety (Calderon-Garciduenas et al. 2003, Sørensen et al. 2003, Mohan Kumar et al. 2008, Salim et al. 2012, Power et al. 2015). In addition, PM2.5 could induce respiratory or cardiac medical conditions (Delfino 2002, United States Environmental Protection Agency (EPA) 2008, 2009, Ling and van Eeden 2009), which may further increase depression and anxiety (Brenes 2003, Scott et al. 2007, Yohannes et al. 2010, Spitzer et al. 2011). Finally, high levels of PM2.5 and other pollutants could also cause individuals to stay indoors, limiting their physical activity. This, in turn, can also have perverse effects on mental health.

The challenge of a lack of a counterfactual

The key empirical challenge in measuring the causal effect of air pollution on mental health (or on any other outcome) is that we cannot observe the mental health status of the same individuals in the same context with and without air pollution exposure. This is a common challenge in empirical research that scientists often overcome through randomised experiments: the random assignment of individuals to treatment and control (exposure or non-exposure). However, purposely exposing individuals to known harmful pollutants is dangerous and unethical. In the absence of randomised experiments, in economics we often resort to ‘natural experiments’: the use of existing variation in exposure to a treatment that can be arguably attributed to a process that is as good as random.

For this study, the source of random variation in pollution exposure is the occurrence of a common meteorological phenomenon called thermal inversions. Thermal inversions occur when a mass of hot air is above the cold air, and thus air pollutants near the ground are trapped. Their occurrence significantly affects air pollution concentrations and has been used as a random source of variation for air pollution in several previous studies (Jans et al. 2014, Hicks et al. 2015, Arceo et al. 2016, Chen et al. 2017, Fu et al. 2017). We exploit variation in short-run PM2.5 exposure induced by thermal inversions in the month prior to the interview date of the China Family Panel Studies survey (CFPS). In this survey individuals report depressive symptoms in the last month through a standardised questionnaire called Kessler Psychological Distress Scale (K6). The questionnaire results in a score that ranges from 0 to 24 and accounts for the severity of the depressive symptoms and has an average of 2.96 in our sample.

A sizeable effect of air pollution on mental health

The effects we find are sizable. A 10% increase in PM2.5 concentrations increases the total K6 score by 0.37 points, or 12.5% of the mean score. We can also look at the number of people that present severe symptoms of mental illness, according to the psychology literature on the use of the K6 test (Kessler et al. 2002, Prochaska et al. 2012). This population corresponds to those with K6 scores above 13 and constitutes 4.38% of the sample. We find that a 10% increase in air pollution increases the probability of having severe mental health illness by 1.7%, or about 40% of the baseline prevalence.

An important question around our results is whether episodes of high pollution exposure have long-lasting impacts on our measure of mental health. We explore this by looking at progressively larger windows of exposure before the interview date, up to a year. We find that pollution exposure in the month prior to the interview has the largest (and most statistically significant) effect on the K6 test scores (see Figure 2). In other words, there appear to be no significant long-lasting impacts of air pollution on depressive symptoms. Note that other studies, like Bishop et al. (2017), find that prolonged exposure to air pollution can significantly affect the prevalence of other dementia. 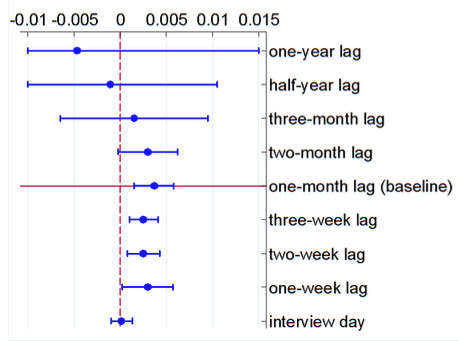 Notes: This figure depicts the impacts of 1 ug/m3 of PM2.5 on the K6 score. The mean concentration of PM2.5  is 47.71 ug/m3 and its standard deviation is 18.04 ug/m3.  PM2.5 is calculated using the average from the past year to past half-year, three months, etc. until the interview day. The circle denotes the point estimate, and the whisker denotes the 95% confidence intervals. The baseline is highlighted in red.

Bringing down air pollution should still be important for policymakers

We still think that our results are encouraging for environmental policy, as they suggest that bringing down air pollution from its currently high baseline levels could produce immediate improvements in the mental health status of people in China. Taking advantage of meteorology-driven episodes of high air pollution, we have documented a causal effect of air pollution exposure on reported depressive symptoms. Although the effects are quite large, we find that these effects are relatively short-lived. This implies that bringing down air pollution concentrations could result in immediate gains in the prevalence of mental health illness.

Editors' note: This column is part of the VoxDev series on air pollution.

Arceo, E, R Hanna and P Oliva (2016), “Does the effect of pollution on infant mortality differ between developing and developed countries? Evidence from Mexico City”, The Economic Journal 126(591): 257–280.

Chay, K and M Greenstone (2003), “The impact of air pollution on infant mortality: Evidence from geographic variation in pollution shocks induced by a recession”, The Quarterly Journal of Economics, 1121–1167.