The cost of labour regulations in India 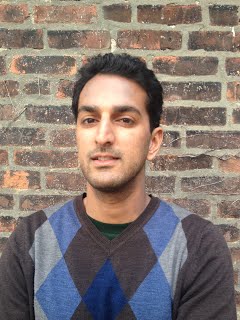 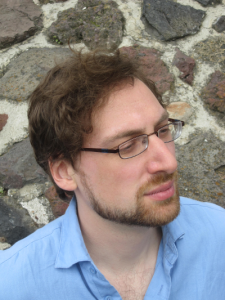 In policy debates and academic literature, restrictive labour regulations have been blamed for some of the most significant problems faced by developing countries, including low labour force participation rates and low levels of employment in the formal sector (Besley and Burgess 2004, Botero et al. 2004, Djankov and Ramalho 2009). But there is a bit of a puzzle: why are labour regulations so costly in a developing country setting, where enforcement agencies are typically characterised by severe resource constraints, low compliance and widespread corruption (Svensson 2005, Chatterjee and Kanbur 2013, Kanbur and Ronconi 2015)? Moreover, how do you measure a regulation’s effective cost to firms if its enforcement differs in practice from what is written in the text of the laws?

In a recent working paper (Amirapu and Gechter 2017), we aim to shed light on both of these questions using data from India. In particular, we:

The debate over labour regulations has been vigorous in India, with a focus on employment protection laws and firing restrictions (Besley and Burgess 2004, Debroy 2013, Nataraj et al. 2014). Employment protection in Indian industrial establishments is governed by the Industrial Disputes Act (1947), the most controversial component of which – Chapter VB – requires establishments with 100 or more workers to obtain permission from the government before shutting down or laying off workers.

But in addition to firing restrictions, India has a large set of other labour laws – including 44 distinct federal labour laws – whose effects have been relatively understudied by academics, despite regular criticism from the business community that these laws are numerous, antiquated and unclear (TeamLease Services 2006). Many of these other laws, including workplace safety regulations, social security taxes, and business registration requirements, only apply to firms with ten or more employees. Since most Indian firms are very small, these regulations affect many more firms than the firing restrictions in the Industrial Disputes Act (Bardhan 2014).

To estimate the costs imposed on firms by the regulations as enforced, we take advantage of the fact that both the key employment protection law and these other regulations can only be legally enforced on firms larger than a certain size.

Our strategy for estimating the costs of labour regulations builds on ideas from a recent study.1 We look for distortions in the firm size distribution that coincide with the size thresholds and use economic theory to translate those distortions into estimates of the de facto cost of the regulations.

The point is best made graphically. Figure 1 displays the establishment size distribution in India using data from the 2005 Economic Census of India, which aims to be a complete enumeration of all non-farm establishments. The Census refers to these as “entrepreneurial units” and defines them as any unit “engaged in the production or distribution of goods or services other than for the sole purpose of own consumption.” As is common in the literature, we occasionally refer to them as “firms” even though the unit of observation in the data is actually a factory or an establishment, rather than a firm (i.e. multiple establishments may belong to the same firm). We do this primarily for expositional purposes, but also based on the observation that only a minute proportion of establishments belong to multi-establishment firms in India. The first thing to note is how skewed the distribution is: 50% of all establishments have only one worker – who is also the owner. 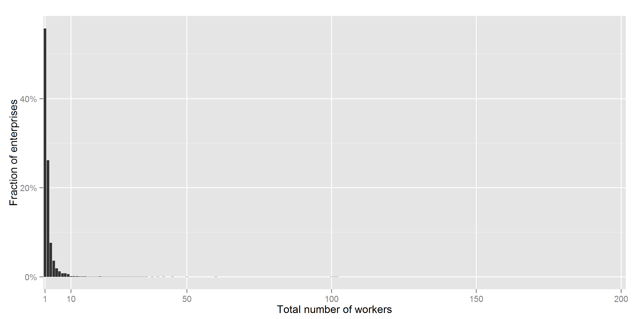 The second thing to note is the shape: firm size distributions usually follow a power law, and India is no exception (Gibrat 1931, Axtell 2001, Hernández-Pérez et al. 2006). This implies that on a logarithmic scale, the firm size distribution appears linear (Figure 2). In fact, the log-linear relationship between firm size and the fraction of firms at a given size is broken and ‘down-shifted’ for firm sizes ten and above.

In other words, there are fewer establishments with ten or more workers than we would otherwise predict. This suggests that firms avoid employing the tenth worker and act as if all workers become more expensive if they do hire ten or more workers. The size of the down-shift, combined with an economic model of establishment size, tells us how much more costly it is to hire workers when the establishment is subject to size-based regulations.

One difficulty we face is the following: what if firms in the economic census are lying about their size in order to avoid the stricter regulations? In that case, firms in the data will appear to be smaller than they really are. Another difficulty is that enumerators might also have incentives to misreport the data, since they had to fill in extra paperwork for firms with more than ten workers.

To make sure that neither of these types of behaviour biases our results, we exploit the fact that such misreporting – either on the part of firms or enumerators – would be most severe close to the threshold. Intuitively, it is easier to lie and say you have nine workers when you actually have 11 or 12 workers than if you have 70 or 80. This means we can accurately estimate the size of the down-shift by excluding those observations close to the threshold and keeping only those observations for which misreporting is least likely to be a problem.

We find that the suite of regulations that kick in at the tenth worker threshold effectively increase firms’ per-worker costs by 35%. In contrast, Indian firms do not behave as if labour is more expensive for establishments above the 100-worker threshold, suggesting that India’s most stringent employment protection legislation is not as restrictive as was previously thought.

The 35% per-worker cost increase associated with having ten or more workers is an average figure, and masks substantial differences across state, industry, and ownership type. For example, we find that privately owned establishments face the highest de facto regulatory costs, while government-owned establishments show no significant cost increase when employing ten or more workers. This supports our interpretation that the down-shift in the distribution starting at ten workers is due to the regulations as opposed to some other factor, since many regulations do not apply to government-owned establishments in the same way.

Regulations and the role of corruption 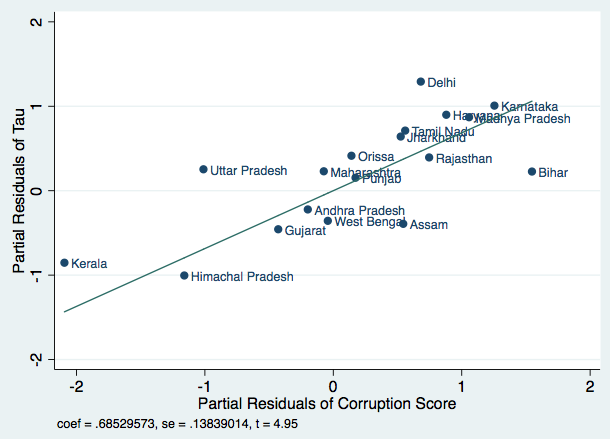 This suggests that the high effective costs may be due to extortionary corruption in the enforcement of regulations, as corrupt inspectors are able to take advantage of the bureaucratic and complex nature of certain regulations to extract bribes. This result may explain why regulations are so costly in developing countries: the quality of governance is too low to prevent this type of rent-seeking behaviour.

Taken together, these results have some clear policy implications. Those interested in reforming labour laws should focus on making the existing laws clear and coherent to reduce the scope for extortionary corruption. This task may be both more politically feasible and more economically impactful than the ever-elusive goal of reforming India’s employment protection legislation.

India’s Ministry of Labour and Employment recently published a draft Labour Code, which aims in part to simplify the laws and may therefore represent a positive step in this direction. However, the draft code also contains elements that may have negative consequences. For example, the idea that all workers would be required to contribute to social security is overambitious given the current levels of informality and state capacity (Kantha 2017). While the intentions behind such a rule may be laudable, our analysis shows that widening the gap between the letter of the law and what can be enforced in practice may facilitate exploitation of the laws by corrupt inspectors.

Amirapu, A and M Gechter (2017), “Labor Regulations and the Cost of Corruption: Evidence from the Indian Firm Size Distribution”, Working Paper.

Debroy, B (2013), “India’s Segmented Labour Markets, Inter-State Differences, and the Scope for Labour Reforms” in B Debroy, L Bhandari, S Aiyar and A Gulati (eds), Economic Freedom of the States of India, Academic Foundation.