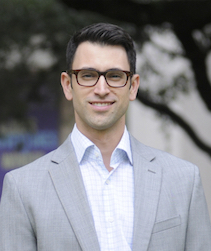 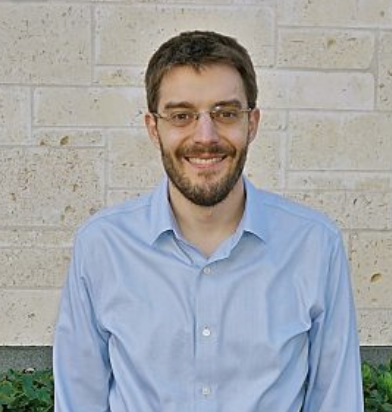 Despite limited data, there is evidence that high heat and humidity in the first month of life results in increased mortality in developing countries

What impact will climate change have on the world? What we do know is that temperatures are rising. Accordingly, the Intergovernmental Panel on Climate Change (IPCC) calls it “virtually certain” that there will be more frequent temperature extremes experienced over most land areas by 2100 (IPCC 2014). That being said, much of the impact of climate change remains difficult to quantify.

Researchers are learning about the ways that exposure to extreme temperatures impacts economies, societies, and human physiology. A pressing challenge is that this impact is heightened among poor people in poor countries. This vulnerability is exacerbated by the fact that the effects of climate change – including infant mortality – are not being effectively monitored by poor governments. This means that researchers cannot evaluate the conditions in order to develop effective response strategies.

There are many plausible impacts of climate change including agricultural output, income, human capital, and health. Yet, there is surprisingly little empirical evidence on what would appear to be one of the most basic questions: How do extreme temperatures affect human survival in developing countries?

There is evidence available from the US (Barreca et al. 2016, Deschênes 2011, Heutel 2017) and from other middle- and high-income countries (Gasparrini et al. 2015) on the impact of climate change on mortality. Unfortunately, studies of this nature have been severely constrained in developing countries due to basic data limitations.

“Vital registration” refers to the government administered database of births and deaths, allowing countries to track population trends. Poor countries often lack these vital registration records, which are routinely available in developed countries. These data support an estimation of the relationship between temperature and mortality. Therefore, countries with poor records rely on estimates from statistical samples.

Developed countries may have better data, however, extrapolating this evidence for application in developing countries can be misleading. Poor populations are more vulnerable to extreme temperatures and humidity, as they have limited access to climate-controlled housing and indoor work. Furthermore, people in developing countries experience heightened health risks and vulnerabilities even without the effects of climate change.

How do extreme temperatures affect children in developing countries?

In a new study (Geruso and Spears 2018), we provide evidence on the effects of extreme heat and humidity on infant mortality in the developing world in an effort to fill the knowledge gap.

We overcome the fundamental data challenge — investigating mortality in countries where there is no comprehensive statistical record of deaths — by constructing sample-based measures of mortality using Demographic and Health Surveys (DHS). These surveys record information on infant deaths for large, nationally representative samples in many of the poorest countries in the world, spanning Africa, Asia, and Latin America.

Figure 1 The 53 developing countries in our data

With these survey data, we find that in these poor countries, very hot and humid days generate large infant mortality effects. Figure 2 displays our findings separately for “dry bulb” temperature (the familiar temperature measure) and for “wet bulb” temperature (a humidity-indexed version).

Humidity is important to the effect of temperature on mortality because humidity effects how humans cool their bodies. When the air is very hot, humans can only cool themselves by sweating – evaporating sweat takes heat with it. But sweat cannot evaporate when the humidity is too high, and the youngest babies are the least able to regulate their temperatures by sweating.

Figure 2 also plots the results from a regression analysis, demonstrating the outcome for infant mortality (deaths per 1,000 births). We investigated the consequences of the weather that a baby was exposed to during its first month. The regression results reveal how, after accounting for the usual weather and locality-specific seasonality of births, the temperature profile experienced during the first month of life impacts infant survival:

To put this in perspective, the total infant mortality rate in most of Western Europe today — from any cause — is less than four per 1,000. In our developing country sample, this is comparable to the incremental impact of being exposed to a week of days with temperatures exceeding 85◦F wet bulb during the first month from birth.

(a) IMR and dry bulb temperature 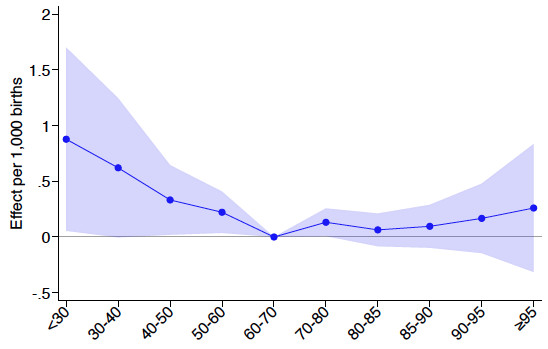 (b) IMR and wet bulb temperature 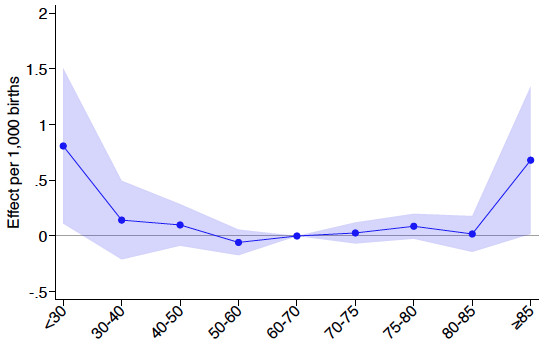 The U-shape apparent in Figure 2 is characteristic of other temperature-mortality studies. However, the size of effects is an order of magnitude larger than past studies, which have typically used vital statistics from the developed world. The parameter estimates in the figure are closest to those in Barreca et al. (2016) for the US from 1930 to 1959, prior to the widespread adoption of air conditioning.

That said, it makes sense that results from the developing world could differ dramatically from effects in developed countries. Our data pertain to poor countries where mortality rates are high. We also study infants, who are more vulnerable than adults; prior studies on temperature and mortality tended to look at people of all ages.

Pregnant mothers and babies in the developing world are more likely than those in developed populations to be vulnerable to poor nutrition, infectious disease, and poverty. What’s more, neonates are especially sensitive to environmental conditions due to their still-developing thermoregulation systems.

The role of humidity indexing

The evaporation of sweat is a humans’ primary thermoregulatory mechanism in high ambient temperatures, meaning humidity-indexing matters. Wet bulb temperature tracks the physics of evaporative heat exchange better than the familiar (dry bulb) measurement of temperature. It is therefore recognised in textbook treatments of human thermal environments as a more informative signal of both comfort and heat stress.

Wet bulb temperature is also widely employed by climate scientists and biologists interested in describing the spectrum of theoretically survivable temperature-humidity combinations (Sherwood 2010, Im 2017). Indeed, we find that the neonatal exposure to hot days is more harmful when those hot days are also humid.

If humidity matters, the harm caused by climate change may not turn out to be worst in the places you might expect. Figure 3 plots the location of each village or urban block in our global sample, along with its temperature and humidity characteristics. Some of the hottest places on Earth are concentrated in sub-Saharan Africa. However, our estimates do not imply the largest incidence of heat-related mortality in these locations, which tend to be dry. Instead, our findings indicate the largest impacts occur in the more humid regions of Asia.

The effects of extreme temperature exposure appear to be significantly larger in the poorest places in the world, at least for infants, for whom DHS survey data enables us to estimate effects. Assessments of the social costs of climate change should incorporate the high social value of death that occurs in early life, as well as a refined understanding of the geographic distribution of damages across the hot versus the humid regions of the world.

Barreca, A, K Clay, O Deschenes, M Greenstone and J S Shapiro (2016), Adapting to Climate Change: The Remarkable Decline in the US Temperature-Mortality Relationship over the Twentieth Century, University of Chicago Press.